A trio of fiction favorites from the newsman and novelist. 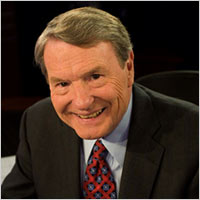 Veteran news anchor Jim Lehrer rose to prominence on PBS’s The MacNeil/Lehrer NewsHour and later, after the departure of Robert MacNeil, The NewsHour with Jim Lehrer. While chronicling current events, he has channeled his  love of history and politics into an array of wide-ranging books including Eureka and The Phony Marine. Along the way Lehrer has moderated eleven presidential debates, and this third occupation forms the basis of his new book, Tension City, a spirited survey of four decades of presidential debates and the behind-the-scenes moments television viewers missed. This week, he points us to three fiction favorites.

The House of Mirth

“If there is such a thing as THE great American novel, I believe it is The House of Mirth. The pitch-perfect story of Lily Bart, a doomed New York socialite wannabe, is a superb mix of a page-turner, a haunting portrait of times and places, and a wrenching examination of humankind.”

The Strangers in the House

“He wrote more than 500 novels — most less than 200 pages — under his own and other names.They are detective stories set in Paris and psychological traumas set in a variety of minds as well as locations. I have read nearly 50 “Simenons” and I chose The Strangers in the House because it is the master at his best.”

“I say, bless Kurt Vonnegut for creating the Rosewaters of Indiana. Their life in the satiric world of philanthropy and related matters is as hilarious as it is on target. I also bless Kurt Vonnegut because he was one of the novelists I wanted to be when I grew up. The other was Ernest Hemingway.”