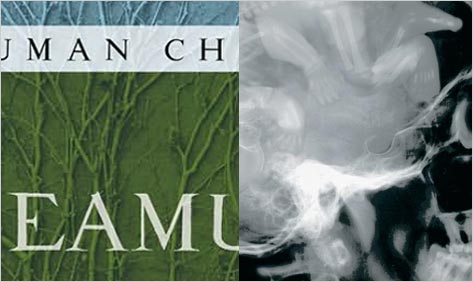 Seamus Heaney and Paul Muldoon surely didn’t sit down together and decide to have their new books published simultaneously. But the decision of their common publisher, Farrar, Straus and Giroux, to bring out Heaney’s Human Chain at the same time as Muldoon’s Maggot only reinforces the sense that there is something fated about the pairing of these two poets. It’s not simply that they are the leading Irish poets of their respective generations: Heaney, born in 1939, won the Nobel Prize in 1995, while Muldoon, born in 1951, won the Pulitzer Prize in 2003. It’s not even that both are from Northern Ireland or that Muldoon was once Heaney’s student, so that it’s possible to imagine a kind of apostolic succession. What makes it so valuable to read them together is that they could not be more unalike as writers. By offering the sharpest possible contrast to one another, each accentuates the other’s uniqueness: Heaney never seems more Heaneyish, or Muldoon more Muldoonish, than when they appear side by side.

A maggot is a maggot, of course, but as Muldoon recently told an interviewer, it can also mean “a couple of other things: a capricious, whimsical thought, a piece of music—a dance tune usually.” Combine those last two senses, and you have a good description of a Muldoon poem: a capricious, or far-fetched, or at times frankly bizarre set of images and obsessions, worked out with the ingenious rhythmicality of a piece of music. Muldoon seems to want the reader to think of a “maggot” as similar to what, in German, is called an Ohrwurm, or “ear worm”—an infectious tune that you can’t get out of your head. To underscore the point, he uses the German word as the title for a short poem:

I spot in my wing-fuselage connection a fatigue crack.

And everything I’ve seen so far I’ve seen in flashback.

Carrying a single rhyme across four lines is as easy as breathing for Muldoon, whose formal dexterity allows him to make double sestinas or sets of a hundred haiku sound airily dashed off. Equally characteristic is his ability to combine a hectic, comic tone with an underlying somberness: this poem, which begins with binging on pork rinds, ends, seemingly, with death in a plane crash.

But “Ohrwurm” is too short a poem to give the full flavor of Muldoon’s style, which thrives on repetition and variation. Most of the poems in Maggot come in extended sequences, and are constructed according to the peculiar formula Muldoon has long since perfected. He starts with a fixed rhyme scheme and a handful of ideas or images, and proceeds to recombine these in ever more rococo variations. The result is rather like watching a juggler add more and more flaming torches and chainsaws, until it seems impossible for him to keep everything up in the air.

In Maggot, the sequence “The Humors of Hakone” is probably the best of these performances. Its nine poems are each made up of five quatrains, rhymed ABAB. But because the line lengths are not fixed, and the rhymes are loose sometimes to the point of being imperceptible (“dry/mortuary” and “open/Cuban” are among the more audible pairs), the poem does not sound like it has any form at all. This combination of seeming randomness with strict rule-following is a Muldoon trademark. So, too, is the grab bag assortment of premises: in “The Humors of Hakone,” we are seemingly being addressed by a forensic pathologist who is investigating the death of a woman in Japan, which somehow involves a “corduroy road,” a high-speed train, and a photo booth. Add it all together and stir, and you get passages like this:

Too late to determine if a salivary gland

or, as her belly resumed its verdure,

implored an eye to give up its vitreous potassium

as a nun from a mendicant order

yellow robe to implore one for a little buckwheat.

Reading the whole sequence does not make the individual parts make more sense, but it does give the impression that Muldoon is in control of the chaos. He is an inscrutable comedian-wizard, mixing poems like potions that usually leave you fizzy-headed, if seldom actually transformed.

Heaney is only a dozen years older than Muldoon, but to turn from Maggot to Human Chain is to leave a fractured, buzzing, intercontinental present for a rural, meditative, almost Wordsworthian past. Heaney has always been the archaeologist and ethnologist of his own childhood, recognizing that the dialect and implements he grew up with, the old way of life led by Irish farmers, were all disappearing in his lifetime. Now seventy years old, and writing in the gathering shadow of mortality—not long ago Heaney suffered a stroke, an event that appears in several poems—his recollections of things past have become even more movingly elegiac.

The poem “Slack” gracefully combines all these themes. Slack, we learn, is the Northern Irish word for coal residue, and in Heaney’s hands it becomes a metaphor for old age: “In days when life prepared for rainy days/It lay there, slumped and waiting/To dampen down and lengthen out/The fire…” This low-quality fuel, good for extending life but hardly for living it, also makes us think of the slack muscles of the stroke patient, especially since Heaney writes in Human Chain about undergoing physical therapy:

Doing physio in the corridor, holding up

As if once more I’d found myself in step

Between two shafts, another’s hand on mine,

Each slither of the share, each stone it hits

Using a walker, in these lines, becomes a muscle memory of pulling a plowshare—suffering converted into labor, and labor into art. The title of this poem is “Chanson d’Aventure,” which may seem like taking valiancy a little too far: is a trip to the emergency room (“Strapped on, wheeled out, forklifted, locked/In position for the drive”) really the beginning of an adventure? But Heaney has always been a poet of affirmation, one who offers strength rather than exploring fear; and this moral firmness has never been more appealing than it is in these late poems. Remarkably, Human Chain is Heaney’s best book since 1996’s The Spirit Level, above all for the way it records the poet’s undisturbed faith in his art:

A great one has put faith in “meaning”

Screaming and protesting, another in

And memories of live”:
Mine for now I put

In books against its vanishing.