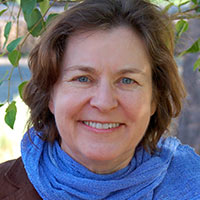 Karen Joy Fowler is the author of We Are All Completely Beside Ourselves, a remarkably original new novel depicting the domestic life of a family that seems entirely ordinary, save for the fact that one of their two daughters is a chimpanzee named Rosemary. The ensuing story of humanity lost and found has garnered wide critical acclaim and resounding admiration from readers and authors alike. This week, Fowler celebrates surreal delights from around the globe, in four stories of odd travelers and unlikely alliances.

Lolly Willowes: or The Loving Huntsman
By Sylvia Townsend Warner

“Something old: I recently reread Sylvia Townsend Warner’s Lolly Willowes. as I had been asked to write a review of an old favorite. I was struck all over again by what a strange and wonderful book it is. Everything proceeds placidly for so many pages. Living for years in her brother’s house in London, Lolly is the reliable spinster sister, the ever-so-useful aunt — until she suddenly announces, to the family’s consternation, that she is moving on her own to the remote village of Great Mop. From then on, things get strange and stranger. I hear that the book was instantly popular when first published in 1926. This surprises me, but in a good way. Knowing just makes me feel better about the world in general.”

A Tale for the Time Being
By Ruth Ozeki

“Something new: I completely and totally love this book. A gorgeous dazzle of a novel, large in concept, with great sweeps of historical and oceanic tides and gyres, but also finely detailed. Some time after the great tsunami in Japan, a woman, Ruth, on an island off the coast of British Columbia finds a Hello Kitty lunchbox washed up on the beach. Inside is a schoolgirl’s diary and inside that, a story. Plus a mystery about a faraway girl who may or may not have survived. Ruth feels that she must find out and this book, which is about so, so many things, is also a beautiful evocation of the intimate connection of writer and reader; the shared creation of the story between them.”

The Impossible Lives of Greta Wells
By Andrew Sean Greer

“And even newer: I love time-travel novels in spite of, or maybe even because of, their inherent knots of impossibility. I couldn’t wait to see what Greer, a great favorite of mine, would do with one, and lucky me, I got to read it in galley as it doesn’t come out for a few weeks yet. As I might have guessed, what Greer does is completely his own and completely wonderful.

“As a side effect of modern (1985) psychiatric treatment, Greta Wells finds herself living in 1918. Further treatments reveal a third life and she begins to cycle from 1918 to 1941 to 1985, and so on. As she jumps, two other iterations of Greta Wells are doing the same, taking her place in the lives she has vacated, making decisions she must deal with when she returns.

“As with Ozeki’s novel, I love the impact of the great movements of history on the private lives of those people who live in interesting times. This is a smart story with observations of such beauty and wisdom that you simply have to stop for a moment, take a breath.”

The Flora Trilogy
By Ysabeau Wilce

“And something else entirely: I heard recently that a large percentage of the YA audience is adult. These are my particular favorites. They take place in an alternate San Francisco and its environs. Califa is a grab-bag of steampunkish technology, British militarism, an Aztec empire with Spanish influences. High fashion! And magic. I love alternate histories as much as I love time travel and Wilce’s start good and get better with each book.

“Flora Segundus, a girl with great Pluck and a famous pedigree, faces many Dangers and has many Adventures over the course of these three volumes. The prose is inventive and gives the tales an enormous, delightful energy. Big books, but fast reads. The third book in the trilogy, Flora’s Fury, has just come out in paperback.”