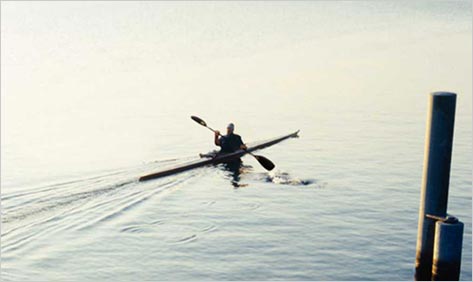 When Roger Rosenblatt’s thirty-eight-year-old daughter, Amy, a pediatrician, died unexpectedly of an undetected heart condition in 2007, he and his wife of nearly fifty years moved from their home in Quogue, on the southern shore of Long Island, down to their daughter’s house in Bethesda, Maryland, to help their son-in-law, a hand surgeon, take care of their three small grandchildren, then ages six, five, and one. In his beautiful memoir Making Toast, Rosenblatt chronicled how pulling together to create a hectic, multigenerational household saved them all. Despite its heartrending subject matter, Making Toast was ultimately a hopeful, heartwarming book.

Kayak Morning, which deals with the tenaciousness of grief, is a more melancholy read, less cathartic and reassuring. It is a bereaved father’s meditation on unacceptable loss. What it has going for it is searing honesty, exquisitely expressed. Discussing his earlier volume, Rosenblatt writes, “In it, I tried to suggest that the best one can do in a situation such as ours is to get on with it. I believe that still. What I failed to calculate is the pain that increases even as one gets on with it.” A therapist friend tells him, “Grief comes to you all at once, so you think it will be over all at once. But it is your guest for a lifetime.” The challenge, Rosenblatt comes to understand, is to transform grief into a positive force.

Always a loner, Rosenblatt takes up kayaking two and a half years after Amy’s death as an escape from his hectic household — which gathers in Quogue during the summer. Affording rare moments of solitude, his time on the water is brooding time away from the brood. Kayak Morning opens just past dawn on June 27, 2010, a few months after the publication of Making Toast. While the rest of his family — including his wife, two grown sons, and six grandchildren — sleep, Rosenblatt slides his olive-green kayak into the water and paddles out to Penniman’s Creek. Over the next seven hours (and 145 pages), he explores both his own life and that of the half-mile-long creek, letting his thoughts and boat meander, “bob[bing] along in solitary confinement” as the “tides rummage with the pebbles.”

Rosenblatt’s observations about his palindromic vessel, literature, and his own painful feelings are sometimes somber but always rich. He comments, “You can’t always make your way in the world by moving up. Or down, for that matter. Boats move laterally on water, which levels everything. It is one of the two great levelers.” Rosenblatt is practiced enough to know that his statement is far more powerful without spelling out the second leveler.

As Rosenblatt’s reflections make clear, it wasn’t as if he lived a life sheltered from painful realities before Amy’s death. The author of fifteen books, including Children of War, Rosenblatt recollects grim assignments reporting on Cambodian girls in Thai refugee camps, patients in a Beirut mental hospital, and children of Hutus and surviving Tutsis staring out windows in a UN camp in Tanzania. He recalls the many U.S. presidents he has met, including an affable Ronald Reagan, about whom he wrote the “Man of the Year” story for Time magazine.

Amid his anger at God and disgust with his own weakness and self-absorption, his thoughts frequently turn to literature, including works about fathers and daughters (King Lear, Emma, Washington Square) and “crazy old men in boats: Coleridge’s Ancient Mariner, Hemingway’s Old Man, Captains Ahab, Nemo, McWhirr, Wolf Larsen, Queeg, Bligh.” Commenting that “Only literary jerks like me think of Moby-Dick in Starbucks,” he adds, “Seeing the world through a book darkly. I’m not sure it’s good for you.”

In other words, all that intellectualizing and introspection may not be as effective a path to happiness as just doing what you have to do: “Too much is made of the value of plumbing the depths. The nice thing about kayaking is that you ride the surface, which is akin to dealing with the task at hand.” Still, for certain people — Rosenblatt among them — plumbing the depths is inescapable. And writing, which, like kayaking, requires “precision and restraint,” is what keeps him afloat, even if it is not as effective at making “sorrow endurable, evil intelligible, justice desirable, and love possible” as he would wish.