Kill Chain: Drones and the Rise of the High-Tech Assassins

Now consider the drone, as Andrew Cockburn does with mordancy in Kill Chain: an unmanned aerial vehicle that has been with us for some time; imagine a hot-air balloon that escapes its mooring. But the kind that takes pictures and fires a high-explosive missile you do not want to be on the receiving end of (and the receiving end is not necessarily its target) — have been, in the word of the moment, trending.

Today, and tomorrow, we (will) have newer drones — what we might call hammer-style R&D drones — up-to-the-minute but not necessarily any more efficacious than their forebears. The brass has always liked high-technology; the leaps and bounds of weaponry from the musket to the HK MP5SD (9mm, suppressed) have been, literally, breathtaking. But there are still points at which gadgetry works great on the drawing board but fails in that crucial third dimension. Drones are currently under production for about $20 million a pop, chicken feed, but the hammer-style R&D version called Gorgon Stare — “will be looking at a whole city, so there will be no way for the adversary to know what we’re looking at, and we can see everything.” The idea is to get past the pesky “latency” lag issue between signal speed and pulling the trigger. Insurgents had soon learned that when they heard (it’s not called a drone for nothing) or saw the glint of a drone they should “move around as much as possible,” and the lag would do the rest of the work in missing the target. Unfortunately, “there was one problem. Gorgon Stare didn’t work, a fact of which the Air Force was perfectly well aware.” With a price tag you don’t want to know. 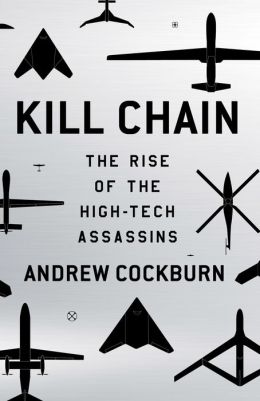 Cockburn holds the drone up and looks at it from every angle. Regarding the spy drones: “Nor do the pictures themselves necessarily always bear close resemblance to the world as the rest of us see it and sometimes are ‘no better than looking at Google Earth through a straw’ . . . Imagery became even less precise if there was dust in the air, if the drone was too high, at dusk or dawn.” The product was cheerfully referred to as “crap, full of static and crackling” by the troops trying to use it. Poor resolution renders individuals as indistinguishable blobs, and so the image interpreters — usually many thousands of miles away from the target in eastern Yemen or an Afghanistan frontier province — now fall back to a list of behavioral characteristics (“patterns of life”) to determine if the target is a danger: is there a ring of dark blobs around a single white blob, is that jeep in the wrong place for this time of day? That is why — along with malign or self-serving tip-offs — we drone-drill funerals, weddings, and brimming schoolhouses.

Killing people like this, even when an intended target is hit, Cockburn writes, is a dark area: is this sniping, an element of declared warfare, or is it assassination — once illegal, now murkier than Cleveland’s Cuyahoga River before it burst into flames, just as this tactic may. Executive Order 11905 (1976) states that “no employee of the United States government shall engage in, or conspire to engage in, political assassination.” Loopholes aplenty, but the spirit is straightforward: that’s murder. What, then, constitutes assassination when the battlefield has gone global? We have U.S. Special Forces operating in 120 countries (about two-thirds of the total). How much civilian death, asks Cockburn, are we willing to accept as inevitable in drone warfare? Shift into second gear: After 9/11, “President Bush signed a secret ‘Memorandum of Notification’ giving the CIA carte blanche to hunt down and kill high-value targets in the al-Qaeda leadership . . . On the day he signed the document, Bush spoke with reporters at the Pentagon, saying ‘I want justice, and there’s an old poster out West, as I recall, saying ‘Wanted, Dead or Alive.’ ” Third gear: “Just three days after Obama was inaugurated, two separate drone strikes in North and South Waziristan authorized by the new president . . . killed up to twenty-five people, including possibly as many as twenty civilians. Neither strike hit its intended high-value target.”

Drone warfare — warfare with as few boots on the ground as possible — is a greased chute to the military’s other top priority: Whack Mr. Big. We have been shooting the guy on the white horse for centuries, but maybe centuries is enough. Kill Castro, kill the Sandinista leadership, kill Qaddafi. This “kingpin strategy” was picked up by the Drug Enforcement Agency in their cocaine war, on the assumption that they “faced a hierarchically structured threat that could be defeated by removing key components.” (Kill Pablo Escobar. The outcome of that strategy was the same as it was when the French employed it in Algerian War in the 1950s. To wit: Things just get worse.) As Cockburn heard again and again from the men and women charged with implementing this strategy: As in drugs, so with jihadists: “It led to the second-in-command — generally the most violent, the most capable to killing — starting to be empowered and generating their own groups, generating another type of crime, spawning kidnapping, extortion and protection rackets.”

Cockburn is a crackerjack writer: low-profile stylish, trustworthy in that he explains his narrative clearly — the participants (eccentric, complex, runic, stupid, pathological), the political background, the psychogeography — and uses footnotes. He draws a high-resolution  picture of vested interests (kickbacks, egos, along with Raytheon, Lockheed, Northrop, Hughes, General Dynamics, Booz Allen, and company), leading us down the garden path to the seventy-two virgins. The tools don’t work — on many levels, drones cut “a wide and indiscriminate swath through local society” — and the military’s strategy is a failure. From an analyst at the Institute of Defense Analysis: “Hitting HVIs [high-value individuals] did not reduce attacks and save American lives. It increased them. Each killing quickly prompted mayhem.”

This is how we are conducting our wars, writes Cockburn, and will continue to do so as we take on more global-cop responsibilities. “We want to die anyway,” a Taliban fighter reminds us. We may have quite different goals, but strategically, the point may be moot.