By Katherine A. Powers / 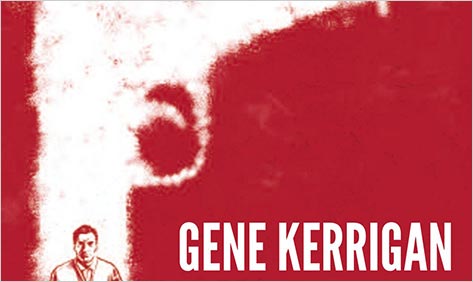 When I look back at 2013 from a reader’s point of view, the year stands out for two reasons: It was the centenary of the birth of the English novelist Barbara Pym, an under-celebrated occasion entirely in keeping with the spirit of comic letdown that pervades this great writer’s work. 2013 was also the year in which I discovered the novels of the Irish writer Gene Kerrigan, author of Little Criminals, The Midnight Choir, Dark Times in the City, and The Rage. Once you get started with these books, there is no stopping, and I went tearing through them, one after another into the night — nights, I should say — as if there were no such thing as a bookmark.

Kerrigan’s territory is chiefly Dublin and the surrounding area. His subject, broadly speaking, is the state of Ireland: the crimes and cover-ups of the country’s politicians, property developers, financiers, and the whole old-boyo network which so ardently and self-regardingly embraced the calling of “entrepreneur” during the years of the Celtic Tiger, now itself a species of roadkill.

Dark and witty, the novels are infused throughout with the larcenous flavor of the businessman’s credo of “initiative and blue-sky thinking,” a charmed formula invoked by one of the characters. That is the milieu, but the suspense-filled plots depend on the parallel operations of the country’s crime kingpins and thugs whose business is protection, prostitution, smuggling, loan sharking, and drugs. As one character observes, “[W]e’re the nation of entrepreneurs…including the psychos who run the drug business. They understand the importance of market share. They can’t use the courts to enforce their mergers and acquisitions, so they use guns.” And finally, Kerrigan gives us the not-always honorable activities of various and variegated members of the Garda Siochána, Ireland’s police force.

Kerrigan is as adept as Elmore Leonard in portraying the self-deluded petty criminal who considers himself a mastermind. But there is something particularly splendid in these Irish bozos: They are faithful reflections of the era, sharing the same fantasy that reigned during Ireland’s fatal boom. And that is, as one of the characters in The Midnight Choir puts it, the “widely proclaimed belief among the business classes that they’d discovered within themselves some long hidden spark of entrepreneurial genius.”

[I]t was like Martin was going soft on the plans they’d talked about in the months before this kidnapping thing. Martin was talking about buying a house somewhere outside Dublin…. Which was fine as far as it went. But you have to think ahead, figure where you want to be ten years from now. And if you want to look at the long term, you’ve got to see this thing as the roots of a money tree. Speculate to accumulate….

As it happens, Frankie’s business concept and reality are not a good fit: He has a run-in with one of Dublin’s most powerful and vicious crime bosses for a start. Then the man Frankie had selected to snatch turns out not to be, as he had believed, one of Ireland’s corrupt bankers with deep off-shore pockets, but, instead, a mere lawyer — corrupt enough to be sure, but rich only by association with the property developers he services. Nonetheless, flexibility being everything in the successful entrepreneur, Frankie and the gang push on and take the man’s wife. Soon enough the police are involved and we are granted a view of their politics and tactics, as well as pages and pages of diabolical suspense and fast-paced action.

Bring on The Midnight Choir, Kerrigan’s second novel, first published in 2006. The story is a complex and shifting arrangement of crimes, criminals, victims, and cops, ingeniously linked through changing points of view. Among the elements are a jewelry heist that turns fatal, tourists threatened with an AIDS contaminated syringe off Grafton Street, a thwarted suicide in Galway, a double murder in Terenure, a rape, police evidence tampering (“assisted truth”), a couple of violent deaths from the past that are poisoning the present, and, on an upbeat note, a crime boss who is getting in shape, eating right, feeling so good that “for the first time in twelve years, [he] had personally carried out a killing and found he enjoyed it.”

All this takes place against a backdrop of rising property prices: “One minute the country hasn’t an arse in its trousers, next minute the millionaires are scrapping over who gets to pay over the odds for a nice aspect.”  The country is overrun with blatting boosters: “These days it’s quality that counts,” explains one such. “That’s the hallmark of the new Ireland. … when we step onto the world stage we set an example.” It is pure Kerrigan, sly and mordant, who has this glad-hander and pelf-gatherer continue: “Whatever the task, the new Ireland puts its best people forward. Look at Bono. Shaking the conscience of the globe. That gives us a kind of credibility you can’t buy.” (This, of course, is the same Bono who, as Irish schools and social programs were rotting in the midst of prosperity, moved his music business offshore to avoid paying taxes.)

With Dark Times in the City, (a finalist for the Gold Dagger Award in 2009), the bubble has burst, but the spirit lives on. As one character remarks of the Irish, “Even when the economy goes into the tank, all they can think about is getting back to the good old days of infinite squander. Offer them sacrifice — they think it’s the height of patriotism to recycle their champagne bottles.” The story here, however, involves few champagne bottles, empty or full, but finds its setting chiefly in insalubrious Dublin, the decaying, neglected regions inhabited by the poor, powerless, and desperate, bullied by both thugs and police. It involves a small-time ex-con, a sympathetic character — for a wonder — who is trying to go straight. A chance event and an act of bravery on his part thwarts a couple of goons in a gangland hit and puts him on the wrong side of a criminal big bug (a man who is reading Sun Tzu’s The Art of War, like every other business leader across the globe). The novel passes to and fro, from the present to the past, from the mean streets of Dublin to its scenic mountains — the chosen site, as it happens, for bump-offs and burials.

With The Rage (which won the Golden Dagger Award in 2012), the realization that the economy has truly collapsed has finally hit home. “At first it seemed almost a technical hitch, like someone needed to sort out a knotty little arithmetic problem. Then house prices went through the floor, jobs evaporated, factories and businesses that had been around for decades folded overnight…. The knowledge that all the backslapping and arrogance of the previous decade was nurtured in bullshit made the country blush like a teenager caught posing in front of the mirror.”

In this atmosphere of crapulence we find a deftly knit plot in which one of the infamous, swindling millionaire banker/property speculators is found shot dead with a bullet which came from the gun that had killed a minor drug dealer.  We also follow small-timer Victor Naylor, a vicious little gurrier recently out of jail and determined to move into the big league. To this end he recruits a few thugs, but, alas, the plan hits a serious and bloody snag thanks to a reclusive old nun. Her story, in turn, opens a window on the past horrors of Ireland’s treatment of orphans and “wayward” young women.  Also at large is a policeman whose everyday job demonstrates the impotence of the law, inclining him to give justice a little shove in the right direction.

In addition to being a novelist, Kerrigan is a columnist for the Irish Independent and a prizewinning journalist who has reported on crime. In other words, he knows whereof he writes and the books, exciting and alive with dialog, provide a fine, if dyspeptic view of the “new Ireland.” This only leaves the question of which to read first. The answer is any one. The stories have a few recurring characters, but you can drop in on them willy-nilly. Certainly, the novels do reflect a progression, that of Ireland’s ruin and downfall. Still, the elements of that descent — corruption, despoliation, social dissolution, and devastation — were always the essential and most visible elements of the boom itself.