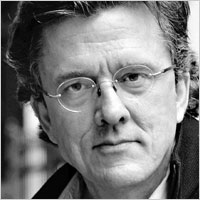 Kurt Andersen has an uncanny knack for turning his curiosity into lively cultural landmarks. A co-founder of Spy magazine, a former columnist for New York and The New Yorker, and the co-creator and host of the Peabody Award-winning Studio 360, a radio cabinet of wonders, Andersen has also written the acclaimed novels Turn of the Century and Heyday. His latest book, Reset, surveys, with characteristically buoyant intelligence, the new world created by global financial turmoil. Here he shares three favorite reads.

“When I first picked up Winter’s Tale 25 years ago, I thought I was immune to the charms of historical fiction, of epic romanticism and, even more, of magical realism. A flying horse? Really? Well, the novel showed me definitively how cramped and wrong my literary prejudices had been: I was wonderstruck. It’s a luxurious, funny, ennobling, awesome, deeply pleasurable tale set in an alternate-universe New York City around 1900…Gabriel Garcia Marquez meets Luc Sante, say. I envy people who haven’t read it yet. “

“The literary establishment doesn’t really approve of Tom Wolfe, but when I first read this, I was a 15-year-old in Omaha, and didn’t know from the literary establishment. I was already an avid reader of newspapers and magazines, but had no idea that journalism was capable of such literary special effects and you-are-there insight. Re-reading it recently, four decades after it was published, I found it stunning all over again. There’s no better non-fiction chronicle of the countercultural Sixties.”

“Susanna Moore’s In the Cut, like so many fine novels before it, was turned into a mediocre film, but I plead with you not to hold that against it. Yes, the novel is a great crime story teeming with sexuality — that’s why Hollywood sucked it up — but in the scrupulous and troubling fashion of great literature. It’s non-retro noir with an unforgettably lovable, damagned, heartbreaking heroine. “

The B&N Podcast: Charlie Mackesy on our Book of the Year
Previous Previous Post: Native Son
Next Post: Tracy Kidder Next