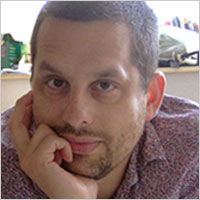 Lars Iyer’s novel, Dogma, continues the absurd adventures of comic philosophers Lars and W first begun in Spurious, a novel based on Iyer’s blog of the same name. As they wind their way through the American South on a hilariously misbegotten intellectual road trip, Iyer’s two protagonists (think Plato and Socrates meet Laurel and Hardy) concoct a philosophical doctrine with ever-changing rules (though the importance of being drunk remains constantly at its heart). This week, the mischeivous author points us to a trio of eclectic favorites.

“My favourite books are curates’ eggs, one-offs that are utterly unthinkable without their very particular author. Such a book is Henry Green’s peculiar and beautiful and ironically titled Concluding, set in an alternative present during a single day at a girls’ boarding school, after two pupils have disappeared. What happened to them is never revealed, even when one of them is found, but it seems that they sought to escape the strictures of their education at the hands of the sinister State. Nor do we learn of the outcome of the struggle between the State-aligned governesses, Miss Edge and Miss Baker, and the retired scientist, Mr Rock, whose presence in the school grounds they find so irksome. These, and other unresolved plotlines, are really only the occasion for the beguiling meanderings of Green’s novel, which pitches against bureaucratic conformism not only Rock’s old-world commonsense, but also the pagan energies of the girls. I love Concluding for the glorious, syntax-straining sentences that flare out of nowhere, and are full of those same wild energies.”

A Voice Through a Cloud

“Denton Welch, like Henry Green, has a small-but-devoted following, and his life is as fascinating as his work. Welch began to write after a terrible accident as an art student, when his bike was hit by a car. His third novel, A Voice Through A Cloud, left unfinished when he died of his injuries at the age of thirty-three, recalls Welch’s accident and rehabilitation and showcases the powers of precise description that are so evident elsewhere in his writing. Perhaps it is the subject matter of the novel which makes it so moving, but there is also something deeply affecting in Welch’s delicate tracing of the psychic tropisms of a young patient, invalided at a time when his life should have taken flight, lonely for companionship, struggling with his dependency on stern and businesslike nurses, and fascinated by the seductive figures of his doctors, who, sympathetic and interesting, are too busy with their work and their lives to give him the companionship he craves.”

“My third choice is also a ‘little’ book, by that author most enamoured of the small and the unobtrusive: Robert Walser. His third novel takes the form of a diary recording the impressions of a runaway, Jakob, enrolled at the Benjamenta Institute, which trains its young charges as servants. Like so many other of Walser’s characters, Jakob actively seeks obscurity, wanting nothing more than to lead his life as a ‘zero’. Happily bent on that course, he enjoys speculating about the eccentric Benjamentas, the brother and sister who run the Institute, as well as about the secrets which might lie within the institute’s mysterious ‘inner chambers’. The charm of this novel, which brings together folk tale and Bildungsroman even as it echoes with contemporaneous novels of introspection, is unparalleled in Walser’s oeuvre. Particularly admirable is the fussless way in which Walser leads us into his strange world, his unornate language as direct as Kafka’s, a good counterpoint to the strength of his vision — so confident in its oddness; so unique.”