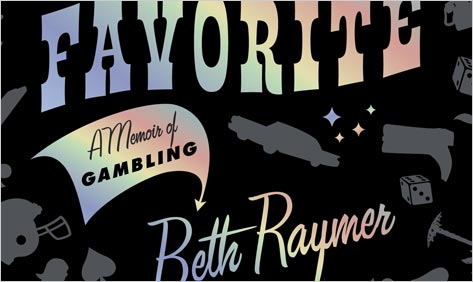 The trouble with cautionary tales is that they rarely afford any surprises. If you’re too thick to guess what’s coming, chances are you’re too thick to appreciate the warning, too. Only a genius can make something timeless of this didactic genre (think Dostoyevsky’s The Gambler). Perhaps Beth Raymer, author of Lay the Favorite, understood this when she sat down to write what one might call an incautionary tale—an unapologetic, largely lesson-free panegyric on gambling.

It’s a memoir, but not in the sense we’re accustomed to; it’s less about Raymer than it is about the misfits with whom she surrounds herself and works: Las Vegas-based pro gambler Douglas “Dink” Heimowitz; his frugality-challenged wife, Tulip; Long Island bookie Bernard Rose; and more boxers, spivs, wheedlers, goons, loose women, degenerates, and wannabes than a whole sagging shelf of crime fiction.

Raymer ends up in Las Vegas by following a doomed relationship, and finds herself in short order living in a $17/night motel room decorated with only a Magic 8-Ball and a road atlas, this latter being an uncannily appropriate departure from the Gideons Bible. She waits tables at a Thai restaurant before going to work for Dink as a handicapper and delivery girl, but her susceptibility to gambling and other unusual work isn’t accidental; we learn that her father is an inveterate gambler and that before reaching Sin City, Raymer worked (with a wink) as an exotic dancer specializing in house calls.

She goes to New York, hoping to go straight, as it were, but is soon put in touch with Bernard. Hoping to give her life structure—no laughter, please—she takes up boxing. This culminates in Raymer’s getting her face turned “eggplant purple” by a Dominican woman, “La Tormenta,” in the Golden Gloves finals at Madison Square Garden’s Felt Forum. She travels to Curaçao and Costa Rica to work for an offshore sports book. She makes a lot of money and spends all of it. That teeth-gritting, fist-clenching sensation you’re experiencing is called “envy.”

Some memoirs read as if their authors courted trouble for something to write about. Lay the Favorite reads like Raymer did so for something to do, and that has made all the difference. Her book is a tribute to what she calls “getting the best of it,” strong-arming every thin dime out of life, and having experiences worth remembering at the expense of stability or, at times, respectability.

Then again, if Raymer’s employment history won’t make her respectable, at least her prose will. “I only learned at [Columbia’s MFA program],” Raymer told Publishers Weekly, “what a metaphor was and how to structure a paragraph.” I’ll buy that for a dollar—but the fact remains, for a debut, by a self-described non-writer, Lay the Favorite is a hell of an achievement. It’s entertaining, funny, and boasts unforgettable images, like a hooker whose “large, dark nipples shone through her white lace unitard like coffee stains on a tablecloth.” Best of all, Raymer never tries to force an insight where wonder will suffice.

The slang-laden chatter of Raymer’s characters is great fun to read, and critics with no way of knowing it will doubtless tell us she has a pitch-perfect ear for the argot of . . . Whatever. Only an insider can vouch for her accuracy. But any rube can see that she’s got an eye for the main chance, and in this case it’s paid off big.