Unless you’re well versed in French history, or familiar with the kibbutz in northern Israel that was named in his honor (I happen to have stayed there briefly in 2010), you may be wondering, “Who, exactly, was Léon Blum, and why does this new biography from Yale University Press’s Jewish Lives series merit my attention?” In fact, the arrival of Léon Blum: Prime Minister, Socialist, Zionist, by French political sociologist Pierre Birnbaum, could hardly be more timely or valuable.

Timely, because in a year when France and anti-Semitism have, sadly, made all too many headlines, Blum (1872–1950) merits particular recognition and remembrance. And yet, as Birnbaum correctly notes, “Today, in the second decade of the twenty-first century, France remains exceptional in this regard: it is virtually the only country in the world, apart from Israel, that has several times chosen as its leader a Jew openly proclaiming his identity.” The first French prime minister of Jewish descent (and not the last), Blum served in that position three times. Moreover, and as the subtitle suggests, Blum’s career as a statesman represents only a portion of his significance. Which brings us to value, because to the extent that the memory of Léon Blum remains, it is, as Birnbaum notes, “slowly fading.” This short and engaging book restores — or, for some readers, will introduce — a fascinating and influential personage to our collective consciousness. 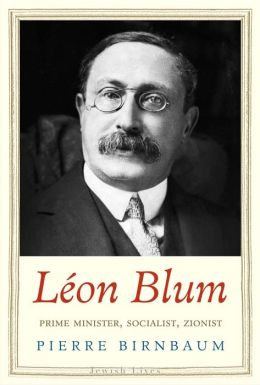 Blum’s first premiership began in the spring of 1936, when he emerged as leader of the leftist Popular Front coalition government, remembered largely for the labor reforms it implemented, including wage increases, unemployment insurance, collective bargaining, the forty-hour work week, and paid vacation. Although a target of subtle and not-so-subtle anti-Semitism throughout his professional life (including, with anticipatory echoes of certain elements in recent American politics, false charges that he was not a “true,” native-born Frenchman), Blum never shied from identifying as a Jew. Writing about Blum’s Jewishness is not necessarily innovative, but the book’s comprehensive final chapter examines his Zionism in detail that was not present, for instance, in the standard English-language biography of Blum that I was assigned in college and graduate school.

Central to Birnbaum’s portrayal of Blum are repeated and approving references to him as the epitome of a “state Jew,” one “who took advantage of the universalistic and egalitarian values of the post-revolutionary French state, advancing through the meritocratic system to achieve emancipation through public service.” Such patriotic types often forged careers as “bureaucrats and civil servants and military officers.” To wit, among the last category: Captain Alfred Dreyfus.

Birnbaum delineates the many differences between Dreyfus and Blum while demonstrating the profound impact of the former on the latter. The 1890s “affair” perpetrated against Dreyfus catalyzed the political awakening of many French intellectuals who came of age at the end of the century, Blum among them. Well on his way to cementing a reputation as a literary artist and critic, Blum shifted course to law and politics in the Dreyfus Affair’s wake. This new path emerged in no small part via his encounters, in the circles that sought justice for Dreyfus, with the man who became his mentor: Jean Jaurès. As fervently as he believed in the ideals of the French republic, Blum soon embraced with equal zeal Jaurès’s brand of socialism. “For Jaurès,” Birnbaum writes, “there was no contradiction between individualism and socialism, and the best place to reconcile the two was the Republic.” And as the succeeding decades would prove, the same held true for Blum.

If you’re beginning to think that you might benefit from a background in French history when reading this book, you’re correct. Still, Birnbaum admirably elucidates the complexities of French political and intellectual currents. He’s particularly adept in clarifying distinctions within segments of the socialist camp as well as the larger gaps between socialism and communism. This is all most helpful once the narrative arrives at the point in the mid-1930s when, “with fascism on the march abroad and the extreme right on the move in France, it was time for a ‘Popular Front’ that would unite the parties of the Left against fascism” — and make Blum prime minister.

Despite its brevity, the book manages to present a fairly rounded portrait of Blum even beyond its explicit focus on the identities suggested in the subtitle. Blum was known for a remarkable optimism and dignity, and Birnbaum highlights those personal qualities while dealing perhaps as tactfully as a biographer might with the matters of his subject’s amorous life and marital history. Blum’s literary development, interests, and achievements, too, receive significant attention.

At the same time, one suspects that a book as compressed as this one may shortchange readers in one respect. The writing sometimes disappoints in its flatness and reliance on cliché: “People in ‘the better neighborhoods’ quaked in their boots.” “The hopes that had been raised were quickly dashed.” “Chaos and anxiety were ubiquitous, and rumors ran wild.” It’s notable that the book’s translator, Arthur Goldhammer, is among the best contemporary translators from the French, and other translations here — from Blum’s writing, for instance — retain their characteristic eloquence. (Disclosure: For several years I was affiliated with Harvard’s Center for European Studies, where Goldhammer remains active.)

But there’s no question that Birnbaum, Goldhammer, and Yale University Press have rendered Anglophone readers an important service. When the Vichy regime began exercising power in 1940, one of Blum’s friends expressed his concern: “They will hunt down Socialists. They will humiliate Jews. And you are both a Socialist and a Jew, to say nothing of being you.” Such anxiety was warranted. In September 1940, Blum was incarcerated first by Vichy authorities; then, in March 1943, he was transferred to captivity just outside the Buchenwald camp in Germany. (He and his wife, whose detention under Nazi guard was exponentially more comfortable than what the nearby inmates experienced, were ultimately liberated by American troops and returned to France in May 1945.) There is something deeply poignant to the realization that this book spotlights the very qualities that made Léon Blum both exceptional and vulnerable in his own time — and very much worth remembering in ours.

Erika Dreifus is the author of Quiet Americans: Stories and a former lecturer on history and literature at Harvard University. Visit her online at www.erikadreifus.com.