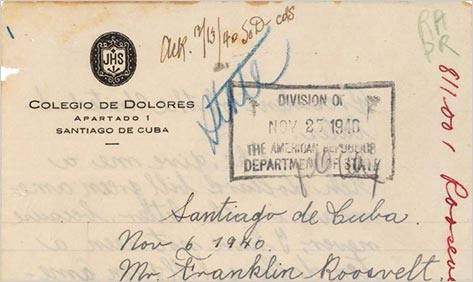 For years I worked as an archivist, a job that, in my case, amounted to sitting around reading other people’s mail. I have read hundreds and hundreds of letters from countless people writing from the eighteenth century to the present and at every level of literacy, with pretty much everything you could think of on their minds. This, I believe — combined with my having edited a collection of letters myself — puts me in the position to pronounce on the subject of letter writing: It’s a gift. Under some pens, a communication so routine as a business letter or thank-you note can possess originality and dash; under the dull scrape of others, even such savory subjects as adulterous love and revenge sound like boilerplate. A letter worth reading is a performance, and among many other illustrations of this truth, one of the most brilliant shows up in Letters of  Note: An Eclectic Collection of Correspondence Deserving of a Wider Audience.

The epistolary masterpiece in question is a rejection letter sent to Gertrude Stein in 1912 by Arthur C. Fifield, explaining why his publishing house is turning down her novel The Making of Americans. “Dear Madam,” he begins,

Fifield concludes by thanking the celebrated modernist and says he’s returning “[o]nly one M.S. by one post.”

The other 124 contributions that make up this exceptionally handsome volume include personal letters, memos, telegrams, open letters written chiefly for political purposes, and a couple of form letters: one a good spoof from Steve Martin, the other, an ancient but still useful instrument from ninth-century China. Devised by the Dunhuang Bureau of Etiquette, it is a standardized apology for drunken behavior to be simply signed and sent. (“Yesterday having drunk too much, I was intoxicated as to pass all bounds…. The next morning, after having heard others speak on the subject,… I was ready to sink into the earth with shame.”)

The book’s editor, Shaun Usher, who officiates over the website Letters of Note, has provided a short, informative, and spirited introduction to each letter. A number of the entries are here because of their momentous subject matter: There is a telegram reporting the bombing of Pearl Harbor, another signed by thirty-six writers and sent to President Franklin D. Roosevelt after Kristallnacht in November 1938, asking him to speak out against the German government’s persecution of Jews and to sever trade relations between the two countries. There is an arresting memo of July 18, 1969, from William Safire to H. R. Haldeman, Nixon’s chief of staff, with the text of a short speech to be given by the president should Neil Armstrong and Buzz Aldrin be stranded on the moon. (“Fate has ordained that the men who went to the moon to explore in peace will stay on the moon to rest in peace.… For every human being who looks up at the moon in the nights to come will know that there is some corner of another world which is forever mankind.”) If that composition proved unnecessary, another was necessary but went unheeded: the famous memo from an engineer at Morton Thiokol, written six months before the Challenger disaster. In it he warns his superiors that the O rings on the solid rocket boosters on the Space Shuttles could fail: “The result would be a catastrophe of the highest order — loss of human life.” 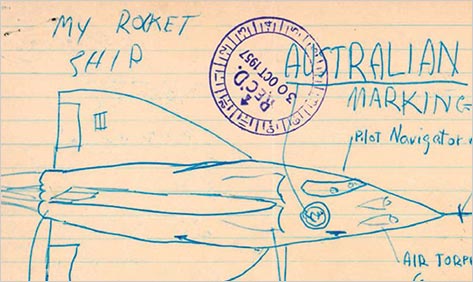 Many of the letters here are reproduced in facsimile (as well as in transcript and translation when necessary), providing a look at some messy handwriting (Mario Puzo’s, for instance) and some very tidy examples; most surprising, perhaps, is Fidel Castro’s careful schoolboy hand. Writing at age fourteen, the future revolutionary asks President Roosevelt for “ten dollars bill green American,” offering to show him “the bigest (minas) of iron of the land.” Less unexpected is Annie Oakley’s sprinting penmanship, found here offering President McKinley the services of “a company of fifty lady sharpshooters” to help out in the Spanish-American War.

Elsewhere, Abraham Lincoln hears from a girl who advises him to grow whiskers: “All the ladies like whiskers and they would tease their husbands to vote for you and then you would be President.” Richard Nixon is told to eat his vegetables and, some time later, gets a confidential request from Elvis Presley, asking to be made a “Federal Agent at Large.” Dwight Eisenhower receives an imploring letter from three Presley fans, begging him to let their idol keep his sideburns when he enters the army, and Jackie Robinson chides him for asking African Americans to have patience about desegregation. A couple of years later, Queen Elizabeth II sends Eisenhower her recipe for scones.

Love letters, which I am guessing make up the majority of the personal letters written today (with letters of umbrage running second by a slim margin) are present, and they are, to say the least, fraught. Emily Dickinson writes passionately to her sister-in-law, and a German woman in a mental hospital writes two words over and over to her husband: “Sweetheart, come.” Zelda Fitzgerald, after a blow-up with Scott, declares that she needs him so badly that she wouldn’t mind if he was “covered in sores like a leper.” Rebecca West, given the hook by that smug bounder H. G. Wells, combines love with acid: “Your spinsterishness,” she informs him, “makes you feel that a woman desperately and hopelessly in love with a man is an indecent spectacle and a reversal of the natural order of things.”

The selection shows again that absence strengthens love, and never more so when brought about by death. Heartfelt letters to dead lovers come from physicist Richard Feynman writing to his wife and Katharine Hepburn to Spencer Tracy. A pregnant sixteenth-century Korean widow implores her deceased husband to come to her in her dreams. In fact, death is all around us in this volume: other suicidal correspondents include a seventeenth-century Japanese woman writing to her slain samurai husband, saying she is going to kill herself to join him. Virginia Woolf writes to Leonard about how she can’t live with her madness, and a kamikaze pilot tells his two young children that he will be watching over them as a god and instructs his five-year-old son to “be an unbeatable person like your father and avenge my death.” Robert Falcon Scott, freezing and starving in the Antarctic, writes a farewell letter to his wife, and someone at the FBI (as it turns out) writes anonymously to Martin Luther King Jr., advising him to commit suicide.

Other entries include witheringly caustic letters from former slaves to the people who have enslaved them, one answering the demand from the writer’s former “owner” that he pay her $1,000 for the horse he rode off on. Her letter is included, and it is a true monument to oblivious self-centeredness. The other former slave writes (or dictates) with a keen ironic edge that is a match for Mark Twain’s or Jonathan Swift’s. His letter purports to answer the request from his former master that he return to the Tennessee plantation because he is desperately needed there. This former master’s letter is not reproduced here, and I have found no sign that it ever actually existed. As the response was, apparently, published in many northern newspapers, I believe that it is probably not, in fact, half of a correspondence but a work of satire, and a truly brilliant one at that.

Letters written by individuals in their own voices to specific people, relating recent events, remind one what the best letters used to achieve before the telephone and cheap long-distance calling arrived to blow personal correspondence to smithereens. Such letters are usually best appreciated in collections devoted to one writer, as in that way the characters of the writer and recipients emerge, as does the development of themes, recurrent jokes, and allusions. The letters of Evelyn Waugh, Dawn Powell, Flannery O’Connor, and E. B. White are examples of great collections; and while this volume includes a sole example from each of the last two named, they are rather etiolated outside the context of their authors’ great flow of correspondence.

Still, we do have some fine personal letters of the sort I like best: Alec Guinness, in a chatty letter to a friend, mentions in passing what became the first Star Wars movie and his role as Obi-Wan Kenobi: “I am enjoying the film, — new rubbish dialogue reaches me every other day on wadges of pink paper — and none of it makes my character clear or even bearable.” There is also a hair-raising account of an operation for breast cancer performed in 1855 on the woman writing the letter; a long description by Aldous Huxley’s wife of her husband’s last days and death (palliated by LSD); and Kurt Vonnegut writing to his family about his experiences as a German prisoner of war, the firebombing of Dresden, and its terrible aftermath. That last, a triumph of ghoulishness and deadpan irony, is an outstanding performance. Fittingly, it concludes the volume.