Lions of the West 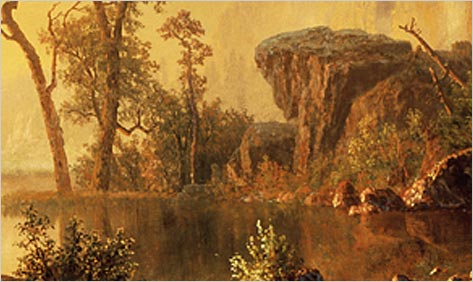 Yet it’s still rather impossible to look at a map of the North American continent and not see a destiny logical and inevitable — indeed, manifest. Once the strip of British colonies on the Atlantic coast wrested a divorce from the mother country, where else could history have gone but west, till it hit another ocean? Like the nursery-catalog saplings assigned to numbered growing zones, Americans — or estadounidenses, to borrow a sorely lacking word from the hemispheric neighbors — seem bred for germination along a sharply bounded clime. In 1783, the new United States’ northernmost point, along the border of what was then the Massachusetts exclave of Maine, lay less than a degree south of the 49° N boundary that would eventually stretch from Minnesota to the Pacific. What became the southern extreme of Arizona and New Mexico is just about a parallel (or sixty-nine miles) north of Georgia’s. Even the exceptional departures from colonial latitudes — namely, Florida and Texas, those subtropical graftings to the mainland and semi-alien nation-states in their own right — seem to prove the rule: The American future has always been due west.

Except, of course, when it wasn’t. In Lions of the West — Robert Morgan’s diverting, if slight, collection of historical profiles — the big cat that casts the longest shadow (in a litter of nine) is probably Andrew Jackson. But, as we learn, that brilliant statesman, strategist, and sociopath of Indian removal only rose to prominence by successfully fighting the Creeks in a sideshow to the War of 1812, whose main offensive thrusts were three comically inept invasions of Canada. Indeed, for its early leaders, freeing the rest of North America from King George’s heirs — not to mention getting at the Loyalists that slipped across the St. Lawrence — seems to have been at least as obvious a part of the nation’s destiny as settling the scrubland west of the Mississippi. (Perhaps the dream lives on. Declassified in 1974, the Army’s 1930s-era “War Plan Red” began with a poison-gas strike on Halifax and was detailed enough to specify the best highway to take in the siege of Vancouver.)

So if not really Founding Father wisdom or constitutional clairvoyance, why west? According to Morgan — whose Appalachia-set poetry and historical novels are romantic nationalism of the oldest school — the high policy and politics of Manifest Destiny always trailed individual fates: “Historians may concentrate on the famous, but most of what happens is the composite deeds of common folk. There is no better example of this paradox than in the narrative of the westward expansion. We must consider the “lions” of the West, but it was the unnoticed thousands on foot and on horseback, in wagons and ox carts, who made the story a fact, who wrote history with their hands and feet, their need and greed , their sweat, and often their blood.”

Well put, but if there is a “paradox” to Lions, it’s surely one of Morgan’s own making. There’s more than a few drams of disingenuousness in laying the narrow path of his own project — focused on celebrities as varied as Thomas Jefferson and John “Johnny Appleseed” Chapman, but all celebrities nonetheless — at the feet of historiographical habit. Academic historians, and some civilians, too, have spent a generation or three scouring out-of-the-way archives and family attics for various micro-histories of everyday life; that Morgan prefers as sources big, popular bestsellers about big names is an authorial choice, and not necessarily an ignoble or contradictory one. Lions of the West reads best as the sort of folk hagiography few risk writing for adults anymore: one that lionizes its sub-titular “heroes and villains of the westward expansion” precisely by turning them into everyday lambs, composite commoners. Thus, Morgan’s fine nose for telling mundanity: We get Jefferson’s exhaustive instructions to Lewis and Clark, touchingly geeky on matters of flora and fauna. And, across several chapters, the apparent centrality of widow marriage as a means of wealth accretion in the early Republic. And dancing as key to the backwoodsman’s character. (David Crockett and Sam Houston could get down; James Polk could not.)

Concluding oddly early — in 1849, with the end of the Mexican-American War and the start of the California Gold Rush — Morgan’s pocket profiles ring more than a bit mythological. (Reading his treatments of Sam Houston and Winfield Scott, one can’t help wondering if horses stand around exchanging stories of how many different human officers were once shot off the back of some illustrious ancestor in the heat of battle.) But the freedom from fact, as such, also makes possible a deceptive shrewdness, and timeliness. “Not until Richard Nixon,” Morgan writes of James Polk, “would another president be so concerned with secrecy, claiming both executive privilege and national security.” Might Nixon be today remembered as quietly effective as Polk — who pushed the U.S. to the Pacific, through war, treaty, and cunning — if, like Polk, he quit in triumph after one term?  Meanwhile, the reader’s sense of Andrew Jackson, Polk’s mentor, is built less in the chapter devoted to him than in the way he lurks in the background of all the others — the only ex-president, perhaps, that successfully installed himself as a sort of American Putin.

Still, Lions of the West can’t really detach itself from a hundred years of having learned better — of a basic skepticism to uncomplicated Destiny — and its attempts to square the circle are problematic. “Sadly,” Morgan writes, “Jackson’s populism (and Polk’s) was a vision of liberty that did not extend to African Americans. While defending and extending the rights of common people, it apparently did not occur to them that the common man included all races and ethnic groups, not to mention women of the common people.” This is offered as a blind spot, an “irony,” yet more likely his lions understood in a way Morgan can’t, or won’t, that certain “rights” — like title to land — really are zero-sum games.

Previous Previous Post: Tides of War
Next Post: "Something Urgent I Have to Say to You" Next