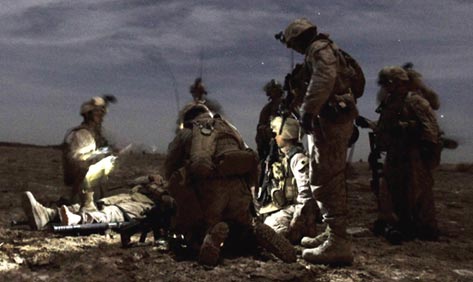 In 1951, American engineers embarked on a massive development project in southern Afghanistan, hoping that the construction of irrigation canals, dams, roads, and farms would transform a desolate swath of the Helmand Province into a modern society whose profit-generating agriculture would be a bulwark against Soviet influence. After nearly thirty years of bungling and mismanagement, the project was finally abandoned when the Soviets invaded Afghanistan. The work had been centered in the town of Lashkar Gah, which Afghans took to calling “Little America.”

”It would not be the last time America would fail to achieve its goals in Afghanistan,” Washington Post reporter Rajiv Chandrasekaran writes with considerable restraint in his important but dispiriting new book about the current war there (he focuses primarily on the southern provinces and the lead-up to and aftermath of President Obama’s 2010 troop surge). He has titled the book Little America because of the missed opportunities and tragic mistakes that unite the failed Cold War project and the execution of today’s war. As he did for Iraq in Imperial Life in the Emerald City, Chandrasekaran catalogs the deep cultural misunderstandings and the more commonplace missteps, stemming from arrogance and incompetence, that have doomed what was supposed to be America’s “good war.”

Through his on-the-ground reporting, much of it in the company of Larry Nicholson, the former top Marine commander in Afghanistan, and a tireless State Department official named Kael Weston, Chandrasekaran describes the implementation of the principles of counterinsurgency (COIN) guiding the U.S. effort. “The grand American counterinsurgency plan called for winning over the population by helping the Afghan government deliver basic services — to show that government could do more for the people than the Taliban could,” he writes. A big problem, of course, was that Hamid Karzai’s government couldn’t and didn’t want to do more for the people: the administration is so corrupt and inept that there has been no way for it to be an effective partner in COIN. In some places, “locals were turning to the insurgents to protect them from their supposed protectors” in their own government.

Chandrasekaran maps out the divisions on Obama’s war team, explaining how the president arrived at the decision to approve a troop surge with a timetable for withdrawal. Weston, a passionate Obama supporter, was particularly stung by the move, believing that coalition stamina, more than a surge, would help guarantee lasting gains in the region. The late Richard Holbrooke, chief envoy to Afghanistan and Pakistan at the time of his death, also supported a long-term commitment, in the hopes that coalition staying power would eventually bring the Taliban to the table for a negotiated political settlement. Negotiations would be more effective when the U.S. “had the most boots on the battlefield,” but “promising leads were left to wither” because of the intense dislike many on Obama’s team had for Holbrooke.

Marine commander Nicholson was happy for the extra troops, though Chandrasekaran raises serious doubts as to whether they were deployed effectively. The Marines insisted on sending troops to Helmand Province, which by 2005 was the world’s leading producer of opium but, as home to less than 4 percent of Afghanistan’s population, had limited strategic significance. U.S. ambassador to Afghanistan Karl Eikenberry joked that the Marines acted so independently that they functioned as a separate nation in the U.S.-led coalition — some American officials referred to their base of operations as “Marineistan” — and indeed, the extent to which the Marines seemed to be fighting their own war is startling. While they succeeded in evicting Taliban insurgents from their sanctuaries in remote Helmand villages, Chandrasekaran questions whether the gains there justified the costs in lives and money (he observes that “the United States was spending more each year to keep Marine battalions in [the districts of] Nawa and Garmser than it was providing the entire nation of Egypt in military and development assistance”) and whether the progress would be sustainable once the Marines went home.

In addition to a surge of troops, development money flooded Afghanistan during this period. Unfortunately, much of it was designed to achieve short-term results. USAID, the United States Agency for International Development, had an agricultural program with a $300 million budget, but the money had to be spent within one year, leading to fraud, waste, and other unintended consequences. “At one point that fall, schools in the [Nawa] district suddenly closed,” Chandrasekaran reports. “Teachers had become day laborers because the work paid better.” It was common practice to dole out cash to insurgents to keep them from attacking development projects.

Chandrasekaran peppers Little America with vivid and revealing details of daily life at war. There’s the USAID staffer whose e-mail signature line included a countdown clock measuring when he’d be able to leave Afghanistan, or the British coalition troops who held an alcohol-soaked “Lash Vegas Pimps and Hos” party while stationed in Lashkar Gah.

He also introduces a number of heroic military personnel and civil servants, some who insisted that they were doing good and others who recognized that, despite their best efforts, they were accomplishing very little. One energetic, competent woman, experienced in foreign development projects and passionate about the region, joined the State Department in order to work on the ground in Afghanistan. Instead she found herself sitting at a desk behind embassy walls as part of a grinding bureaucracy at the compound in Kabul. When her placement ended, she was asked to evaluate her job performance. She “had stayed so busy that she barely managed to get four hours of sleep a night,” Chandrasekaran writes. “But when she tried to think of how she had helped the Afghan people — or her fellow Americans — ‘I couldn’t come up with anything worthwhile that I had done.’ “