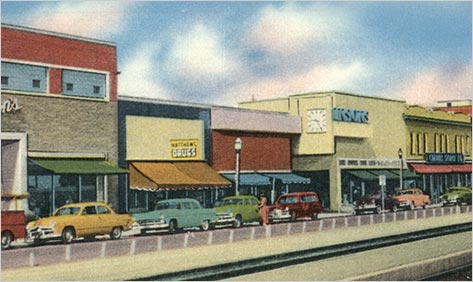 Ever since Sherwood Anderson published Winesburg, Ohio in 1919, American writers who set out to describe small-town life have struggled with his influence like an inherited disease. Allan Gurganus is no different. The people of Falls, North Carolina — the small town that serves as the setting of the three novellas in Local Souls, his fifth book of fiction — are grotesques who smashed their moral compass long ago (if they ever had one) and now find themselves wandering aimlessly along the edges of an insular and isolated community. They are “souls born to stay local,” solitary and self-pitying over their marginal status, “stranded in some garrison town.” With an upgrade of their electrical gadgets and a WiFi connection, they could have stepped from Anderson’s pages. Even the map printed as a frontispiece, with the sites of key events carefully flagged, looks like the map in Winesburg, Ohio.

Gurganus is best known for his 1989 debut. Oldest Living Confederate Widow Tells All, a 700-page Little Big Man of the Civil War and its aftermath, was published when he was forty-two. It enjoyed all the ripe, sweet fruits of the blockbuster: months-long stay on the New York Times bestseller list, Book-of-the-Month Club main selection, Hollywood adaptation. Gurganus has never come close to duplicating its success, has never seemed to want to. Plays Well with Others  may be the better novel — a story that did for pre-AIDS New York what Aharon Appelfeld’s Badenheim 1939 did for pre-Holocaust Europe — but it attracted less than one-eighth the attention of his first novel. He is probably at his best in Henry James’s “ideal, the beautiful and blest nouvelle,” the genre of fiction that marries the tight effects of a short story to the larger vision of a novel. Local Souls is Gurganus’s second collection, following The Practical Heart just over a decade later.

“Fear Not,” the opening tale, is told by a writer who sounds suspiciously like Gurganus himself. Having “FedExed north [his] Civil War novel” a few days earlier, he is “becalmed and itchy between novels.” As a favor to a friend, he attends a high school production of Sweeney Todd to watch his teenage godson in a supporting role. There a glamorous couple catches his eye — “tall athletic blondes,” “the lion-kingly.” Immediately his “narrative capacity” kicks in. “A storyteller’s first task is knowing the tale when he sees it,” he says. To redeem curiosity from voyeurism, he must ferret out the whole story. And what a story! A boating accident (water skier, decapitation) leads to the seduction of a minor and then incest: rarely has Southern Gothic been narrated with such good cheer. Throughout, Gurganus keeps his attention focused on the possibility for happiness in even the most twisted of fates. If the ending seems arbitrary and unlikely, the reason is that Gurganus prefers comedy, whose tranquillity may seem just as arbitrary and unlikely, to the inevitable door slam of tragedy. For him the human problem is to find some “route to joy” (most are “detours,” he adds), and to bless those who manage to find one.

In “Saints Have Mothers,” the comic ending is an even more satisfying break with the “iron neck-brace of expectation.” Caitlin Mulray, an overachieving high school student with a reputation for left-wing preening (she wins a national contest for Best Poem Concerning the Homeless) and uninhibited selflessness (she donates her mother’s shoes to charity without asking), travels to Africa in the summer between her junior and senior years to “drill ABC’s into tribal babies with flies working the wet corners of their little eyes.” She drowns while swimming in an African river. A phone call from the interior asks her mother, Jean, where to send the body. She wires the money to pay for the international shipment.

An unreliable narrator whose IQ swells from 156 to 171 over the course of the story (even if she does say so herself), Jean throws all her energies into planning a memorial service for Caitlin. She commissions an original piece of music and enlists the Virginia Symphony Orchestra to play it. She even summons the courage, although paralyzed by stage fright her entire adult life, to prepare a passage from the Book of Common Prayer to recite in her daughter’s memory. Then Caitlin returns home. A “brainiac” IQ was not enough to protect her mother from an African con man. Unable to cry when Caitlin was reported dead, Jean cries now at becoming a laughingstock in Falls: “I cried for the way only Tragedy had ever made me feel comically-and-completely alive,” she says. “I thought of that now-trite line: Tragedy plus Time equals Comedy.” Her happiness at Caitlin’s “rebirth” only reveals the unhappiness at the core of her own life and permits her — perhaps — to begin to discover a happiness of her own. If only by admitting that perhaps her daughter is not quite as wonderful and selfless — or as lovable — as she is reputed to be.

“Decoy,” the 150-page novella that concludes the book, is worth the price of the entire collection. Except for his red and angry-looking Bush-and-Republicans-and-Fox-News bashing — the common skin disease of so much contemporary American fiction — Gurganus has tackled a subject that interests few of his peers: “Brands of cars in here I recognize but not what any of these crazy lazy people do all day,” his main character grouses after reading an armful of recent novels. “I’m bored for ’em.” Gurganus is interested in men and women who do more than talk about things, although his characters talk up a storm and in a unique and beguiling idiom. They may occasionally sound more literary (and liberal) than most ordinary southerners, but they aren’t writers or literary intellectuals. The narrator of “Decoy” is an insurance man, for instance, and the main character is the town’s doctor.

After retirement, Doc Roper discovers his second calling. Inspired by the work of traditional American folk artists, the doc begins to carve duck decoys so good you feel your own landing gear coming down (the crack is his). The better he gets, the more he retreats from his old friends among the people of Falls. His studio lights burn all night, but he doesn’t see anyone anymore. As his fame grows, newspapers and magazines seek him out for profiles. He signs with a New York agent; his best pieces are reserved for museums and “top Manhattan collectors.” His old friends could not afford them, even if he were inclined to sell them locally.

Doc’s tragic error is to remain in Falls, despite his success. Those who flee the town of 6,803 “local souls” do so “to strain for stardom elsewhere.” Those who stay behind are inured to frustration and failure. Except for Doc, who must have assumed the town’s hex did not apply to him.

But it was not to be. A hurricane named Greta (obviously modeled upon Hurricane Floyd, the 1999 storm that dumped seventeen inches of rain on North Carolina and caused rivers in the state to rise to 500-year flood levels) makes landfall one night in early September. The residents of Falls are not even aware their houses have flooded till they come downstairs in the morning. Gurganus is at his best at describing the aftermath of the storm, the treasures ruined, the lives turned inside out. No one suffers more than Doc Roper, whose entire collection of museum-quality decoys is swept away by the flood waters. Addled by the loss, he spends the rest of his life — he is in his eighties, though still vigorous — searching drainage trenches and roadside gulleys for his beloved ducks. In his grief over the disappearance of his second life’s work, Doc becomes even more of an outsider in Falls than when he was establishing himself as a “Manhattan-worthy” artist. The town that once depended upon his sutures and scripts turns on him with a vengeance. There is talk about getting up a petition. Wandering the town’s roadsides in shorts, carrying a walking stick with which he pokes at piles of rubbish, looking feral, the Doc is “sending the wrong signal to Falls’ newcomers.” Thus one man’s tragedy becomes an entire town’s comedy.

Sixty years ago, Lionel Trilling rejected the idea that Sherwood Anderson could ever be a major writer, accusing him of vaporous sentimentality. His one truth, though, if it is taken out of Anderson’s hands, remains a firm truth: “The small legitimate existence, so necessary for the majority of men to achieve, is in our age so very hard, so nearly impossible, for them to achieve.” In Falls, North Carolina, things are no easier than they were in Winesburg, Ohio. In Allan Gurganus’s fiction, though, there is no sentimentalizing over life’s hardness, perhaps because more of his men and women achieve a legitimate existence than is usual in contemporary American fiction.

D. G. Myers is the author of The Elephants Teach: Creative Writing since 1880. He teaches English and Jewish studies at the Ohio State University.