CARTOGRAPHIA: MAPPING CIVILIZATIONS and MAPS: FINDING OUR PLACE IN THE WORLD 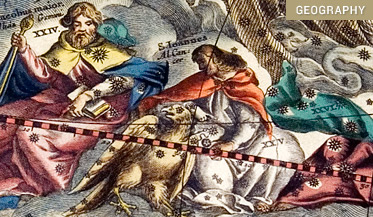 The first way, via Cartographia by Vincent Virga and the Library of Congress, is the more scenic route. In fact, the beauty of this volume may provoke gasps at the very outset, between the endpapers, with their pictorial map on cloth of the Kashmir Valley in the colors of an apple harvest, and the half-title page, which shows a 15th-century manuscript portrait of Ptolemy rendering the first map of the known world. From there, the oversized pages lead east and west through the best and most beautiful exemplars selected from among the more than five million housed in the Library’s Geography and Map Division.

Normally I wouldn’t expect to read a book so heavily weighted with gorgeous imagery. The text could be printer’s Greek, and I would still be content with the pictures — portolan charts illuminated in colored inks on vellum, mariners’ maps crowded with rhumb lines and sea monsters. But I was captivated by the text of Cartographia. The author contends that “maps are powerful storytellers, providing graphic documentation of human activity as it unfolded on the planet Earth.” Therefore his story begins in the Mediterranean world, among stone carvings of the Babylonian cosmos and Egyptian funerary maps of the route to Paradise. It discovers and shapes all the continents, as well as several imaginary landscapes and the plan of the human genome, before ending at the sole bland-looking map in the whole collection, yet one that encompasses infinite journeys: the charted locations of books in the stacks at the Library of Congress.

Every map in Cartographia earns its own epithet, to underscore its cultural significance and emphasize the author’s contention that a map is “a dream, an idea, an action, an emblem of human endeavor.” For example, the series of Japanese maps opens with an estate plan of Minase Manor in Settsu Province, created in 756. Virga calls it “Map as Contours of Feudalism.” There follow “Map as Dawning of Modern Empire” (an 1854 overview of Hokkaido that ignores Russian claims to Sakhalin and the Kuril Islands), “Map as Emblem of Self-Esteem” (a gilded, multi-panel screen with bird’s-eye views of city life in Edo), and “Map as a Nation’s Psyche” (Mount Fuji with its four feudal domains, painted in shades of turquoise and red, plus four poems about them). Further south, one encounters “Map as Song of Liberation” in India, “Map as Blueprint for Hardship” in South Africa, and “Map as Historic Quest Completed” in Antarctica.

So rich is the world heritage of maps that the 200 illustrations in Cartographia overlap in scarcely half a dozen instances with the 186 pictures in Maps: Finding Our Place in the World. But while Cartographia presents itself as a lavishly produced fine art tome, Maps has the look and feel (and smell) of a better-than-average textbook. Here the reader is less likely to be visually dazzled than intellectually informed by the scholarly essays of nine contributing authors.

Maps grew out of an exhibition of the same name that opened in November at Chicago’s Field Museum, and one walks through the book as one might tour the exhibit hall. The book, however, claims to transcend the show by including even more maps and interpreting them in greater depth. The text, academic in style, also includes numbered footnotes and parenthetical references to cited works. One minor consequence of its organization is that some maps are discussed in two or more contexts but pictured in just one, so that the reader occasionally needs to flip back and forth among the pages to follow the arguments. But this is well worth doing.

“The role of any map is to invest the world with meaning and significance,” writes Matthew H. Edney, director of the History of Cartography Project at the University of Wisconsin, Madison, in his chapter about mapping individual parts of the world. “Like poetry and art, maps fix and define particular interpretations and understandings of what such-and-such a place is, how it is distinct, and what it should mean.”

Instead of following a chronological course, Maps proceeds thematically through the subspecies of its genre, such as “Mapping the World,” “Visualizing Nature and Society,” and “Mapping American History.” In the latter chapter, Susan Schulten of the University of Denver takes up a group portrait painted in 1864 by Francis Bicknell Carpenter, called “First Reading of the Emancipation Proclamation of President Lincoln,” that now hangs in the Capitol Building. At least two maps figure in the scene — a plan of Virginia and an 1861 “Map Showing the Distribution of the Slave Population of the Southern States.” The so-called slave map, Schulten writes, was executed by Edward Hergesheimer in 1861 with data from the 1860 Census, then printed in quantity and sold to raise money for sick and wounded Union soldiers. It employed the relatively new technique of “chloropleth shading” to dramatize the percentage of the population enslaved in each southern county, and thereby “showed Americans their country through the lens of slavery.” The map is said to have been a favorite of Lincoln’s, and its presence in Carpenter’s painting raises the question of how maps may influence the course of history.

If Maps is an introduction to maps and their history, Cartographia is a world history told through maps. The biggest divide separating the two books is the difference in perspective of the respective authors. Maps is written by historians and geographers who are recognized experts in their fields, while Cartographia comes from a novelist and picture editor who confesses, in his acknowledgments, that as recently as ten years ago he didn’t “get” maps. Although he appears to understand them with profound appreciation now, he still manages to impart the excitement of his own fresh discoveries in his descriptions.

Previous Previous Post: The City in Crimson Cloak
Next Post: The Melancholy Fate of Capt. Lewis Next