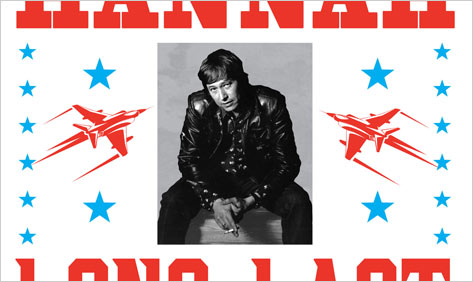 BarryHannah’s inimitable style is a performance, an endmasquerading as a means. Depicting events as they are recalled, not as theyunfold, his stories make stunning, sometimes achronological leaps. Yet most ofus are attached to the idea that sequences demonstrate progress, if onlybecause we hope that, in time, life will. The stories in this posthumouscollection, Long, Last, Happy: New and Selected Stories,are arranged chronologically, a format that almost begs an assessment of his career.Assessment: Hannah revisited old themes in search of meaning. If this soundsbanal, “meaning” is tricky in relation to Hannah, who began writingin a decade when Susan Sontag asked for literature to defy the desire formeaning, for an “erotics, not a hermeneutics, of art.”

It’s unlikely that Hannah took the advice ofSontag, or anyone who suggested what stories should be. But it was an era ofintoxication, and we expected no less from our prose. Hannah courted clichés—inlanguage, ideological clichés too—and deranged them. Individual words trail thesmoke of previous connotations established by long usage. Accordingly, somewords have lofty connotations. Others are pedestrian, trivial. The entirety oflanguage is a scaffolding of fixed ideas, and ordinary people use words infamiliar contexts, keeping usual connotations intact. But a virtuoso like Hannahput words in juxtapositions so startling they rattle the cage. A narrator,unmanned by the fact that his wife is taking flying lessons, says: “Someafternoons she’ll come right over the roof of the house and turn the planeupside down. . . I want to rip her arm off. I want to sleep in her uterus withmy foot hanging out.”

He used this ferocious style in dialogue:

“My wife is a withered rag,” one manblurts.

“Life here is a belligerent sow, not a prayer,”responds the other.

Hisstories therefore flaunt style to the point ofdeemphasizing what happens, which is either very little (contemplation) or alot (spates of random hardship and calamity). In this sense, his stories parodytraditional stories in which causality matters. So they’ve sometimes beencalled metafiction. In fact, they’re just style-drenched. Like Gertrude Stein—andI know the comparison makes for disconcertingly strange bedfellows—Hannahturned attention toward the texture of prose, its surprises, and away from whatStein considered the cruder surprise of plot with its implied message.

Hannah once said in an interview that, when he wasyoung, disinhibition was his muse; in later years, regret was. As the bookgrows longer, the stories return to themes he once touched down on ascontroversial essence and then, in surreal fashion, linked to comic details. Inthe midst of first-wave feminism, he wrote: “I’d like to stick her brain.. . I’d like to have her hair falling around my bonker.” He used the words”nigger” and “Negro,” and enclosed them with images so unlikelywe reconsidered our collective blind spots: “We unloaded the asses andNegroes from the back end of our car and managed to get a look at the map.”And sometimes he left our blind spots as he found them. A saxophone played inexpertlysounds “like the mutterings of a field nigger.”

However, in one of Hannah’s last stories, anarrator says: “The lynching of blacks by vigilantes is gone forever, hopeto God. We have a new aristocracy and they are black men.” Klansmen are “imbeciliccowards cheered on by silence from miserable governors.” Imbedded in hisusual incantatory narration is a Hannahesque paraphrase of Edmund Burke’s lineabout the silence of good men, a near-apology for “staying quiet when aheinous thing is about.” Hannah always wrote about absence: the fish thatgot away; the woman who got away; the savior who, unrecognized, got away. Heeventually seemed to say that meaning, unrecognized, got away too.

His final stories are both irreverent and sincere,a juxtaposition that doesn’t pack a punch because stylized juxtapositions dependon irony. He ended his career more heartfelt than not. His characters speculateabout “misincarnation.” They’re Christ-obsessed. They wait for asign. Narrative logic still eludes them: “There must be a string flowingthrough these events but she couldn’t find it.” They opine, desperately. “Talk,talk, talk,” one says. “Much said and nothing settled. You’re noteven certain of the subject anymore.” These moments seem to contain Hannah’sown appraisal of his life’s work, which broached meaning but never fastenedonto it. His early stories are audacious, brilliant, dazzling, evasive. Perhaps,as he wrote himself—and may the God of “Water Liars” rest his soul—”theromance depended on . . .never completing a thought.”