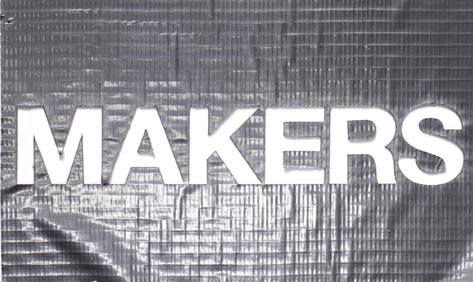 Chris Anderson, the editor in chief of Wired magazine, is among Silicon Valley’s most prescient authors. In his 2006 bestselling The Long Tail, Anderson identified the radically democratizing impact of the Internet upon the traditional information economy. And now, shifting his gaze from the digital to the physical world, the futurist sees something called a “long tail of things,” which, he believes, will put industrial society through a change that will make the arrival of networked life seem like a mere prelude to the real show.

In Makers, Anderson offers a vision of the newest manufacturing technology — in the form of 3-D printers that will, essentially, enable anyone to make anything — and how it will radically democratize the industrial economy. “We are all makers now,” Anderson thus writes about these revolutionary machines with the power to transform our desktops into miniature factories.

“It used to be hard to change the world with an idea alone…. It used to be hard to be an entrepreneur,” Anderson explains. But with affordable the hardware of 3-D printers and an abundance of open source design algorithms, he says of this brave new economy, anyone can become Henry Ford. And if the idea of a personalized production line alone doesn’t boggle your mind, consider the potential economic significance: While the Internet economy is worth around $20 trillion, Anderson says, the non-Web economy is worth around $130 trillion — thereby making “the world of atoms at least five times larger than the world of bits.” Taking a page out of The Communist Manifesto, he exhorts “workshops of the world unite!”

But Makers is more than just a vulgar pamphlet about our cornucopian future. Indeed, what I most enjoyed about Anderson’s new book is the skill with which he has woven a compelling autobiographical element through this narrative of the digital-material breakthrough.

Anderson begins Makers with the story of his maternal grandfather, a Swiss immigrant machinist called Fred Hauser, an industrial inventor but not, Anderson regrets, an entrepreneur. Back in the seventies, the teenage Anderson spent his summers with Hauser in Los Angeles, making stuff in his grandfather’s workshop. One time, Anderson remembers, in order to make a gasoline engine, they engineered a “precision machine” from some blocks of metal.

“We were a mini-factory,” Anderson recalls about his time with Hauser. But it took the boy and the old man a whole summer to transform the lump of metal into the crankshaft, piston, bearings, and valves necessary to make the engine.

Fast-forward forty years, and Anderson introduces us to the new industrial revolution, in a moment at home in Berkeley with his two youngest daughters, who want to redecorate their dollhouse using designs borrowed from the virtual online game Sims 3. And instead of a workshop like Anderson’s grandfather’s, they have, sitting on a desktop, the MakerBot Thing-O-Matic. This device is a 3-D printer, a relatively affordable ($1,225) device that effortlessly spits out physical objects. Feed it an open-source design and it will automatically manufacture that object.

“If you’re a toy company,” Anderson dryly concludes, “this story should give you chills.”

Makers is an important book, more prescient, I suspect, than The Long Tail. As he notes, in a decade or two, hobbyist 3-D printers like the MakerBot Thing-O-Matic will be “fast, silent, and able to print a wide range of materials, from plastics to wood pulp and even food.” This technological progress is inevitable, he predicts, a “Moore’s Law for Atoms” that will ultimately empower all of us, in theory at least, to have factories at our fingertips.

So it’s not just toy companies who will be chilled by Makers. As Anderson predicts, the new industrial revolution of 3-D printers will revolutionize everything from the production of cars to even rockets – a sector that he thinks might eventually reinvigorate the American space program. Indeed Anderson is so enamored with what he sees coming that, he tells us, he has even co-founded his own 3-D company, a start-up called 3DRobotics, already generating millions of dollars of revenue.

Yes, anyone in the $130 trillion economy of atoms (i.e., all of us) certainly needs to read Makers. But while it is eminently readable and stimulating, Anderson’s new book is sometimes a little too breathlessly techno-utopian for my skeptical taste. And just as The Long Tail oversimplified the economics of selling Internet content, so the exuberant Makers fails to seriously address the complexity of an economy in which devices like the MakerBot Thing-O-Matic transforms each of us into a little Henry Ford. Anderson celebrates the new industrial revolution with the glibness of an adolescent entrepreneur: “It’s a revolutionary act. It’s thrillingly cool. It’s a political statement.” That may be true for brilliant innovators like Anderson and his Silicon Valley friends. But like so many techno-futurists, Anderson has no interest in the victims of this new revolution — in particular, Marx’s old industrial working class. The consequences for them will likely be equally radical — if not, unfortunately, of the sort anyone would call “cool.”