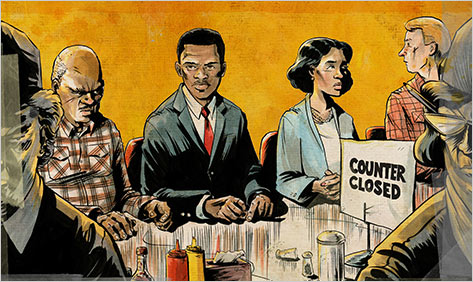 Long before the advent of the “graphic novel,” the occasional comic book focused on the feats of more tangible superheroes. Perhaps the most famous example came in 1958, when a pacifist organization called the Fellowship of Reconciliation published a single-issue comic about the up-and-coming leader of the 1955 Montgomery Bus Boycott. Martin Luther King and the Montgomery Story explained the tenets of nonviolent action that had guided the yearlong boycott, which led to the desegregation of the Alabama city’s public bus system; it sold more than 250,000 copies and influenced young activists working to desegregate the Jim Crow South. That comic book is read by the characters in the powerful new graphic novel March, which tells the story of the civil rights movement from the perspective of another one of its icons, Georgia congressman John Lewis.

March has been planned as a trilogy, and the release of its first volume takes place on the eve of the fiftieth anniversary of the March on Washington for Jobs and Freedom. Of all who spoke in front of the Lincoln Memorial on that summer day in 1963 — most famously King, who delivered his “I Have a Dream” speech — only Lewis is still alive, making this project, intended for young adult readers, feel all the more vital.

March was co-written by Lewis and one of his congressional staffers, Andrew Aydin (the narrative also draws from Lewis’s 1998 memoir, Walking with the Wind); the artwork is by Nate Powell, winner of the Eisner Award for Swallow Me Whole. The book opens on the morning of Barack Obama’s first inauguration. Lewis has stopped by his Capitol Hill office on his way to the event, and there he encounters some constituents, an African-American mother and her two young sons; the story’s point of view shuttles back and forth in time as Lewis tells the boys about his childhood and the early years of civil rights while preparing to attend the inauguration of the country’s first African-American president.

Powell’s artwork — dynamic and richly expressive — is particularly evocative when he depicts Lewis’s childhood in rural Alabama, where his solicitous concern for his family’s chickens presaged his later interest in social justice. A formative summer spent with aunts and uncles in an integrated neighborhood of Buffalo contributed to Lewis’s growing awareness of the iniquities of the South, where, in stark contrast to white children, he carried hand-me-down textbooks onto a rickety school bus that traveled unpaved roads to an ugly, cinder-block schoolhouse. “After that trip,” Lewis writes, “home never felt the same, and neither did I.” Still, he thrived in school, even while he was increasingly politicized by the events — the Supreme Court’s Brown vs. Board of Education decision, the murder of Emmett Till, the Montgomery boycott — that gripped the region.

He left Alabama to attend the American Baptist Theological Seminary in Nashville; there, through his church, Lewis underwent thorough instruction in the principles and practice of nonviolent resistance in preparation for sit-ins to desegregate stores and lunch counters downtown. March devotes many pages to the extensive training that preceded these demonstrations: activists studied the teachings of Gandhi, role-played by hurling racial epithets at each other, and learned how to position themselves during beatings. Rosa Parks is more often remembered as a tired seamstress than as an NAACP activist who knew that the organization was looking for a plaintiff to test the constitutionality of segregation on public buses. In a similar vein, March provides a potent reminder that the sit-ins, far from being casually assembled, were well-coordinated, disciplined events informed by a rigorous philosophy.

Though the trilogy is named for the pivotal 1965 marches from Selma to Montgomery, the first volume leaves off in Nashville, still early in Lewis’s activist career. At book’s end, the Student Nonviolent Coordinating Committee, which Lewis would eventually chair, is being formed. There are hints of the violence to come, just as there are hints of the fissures within the movement, felt especially by younger activists like Lewis, who regarded his elders as too conservative. (“Our revolt was as much against the traditional black leadership structure as it was against segregation and discrimination,” he writes.) Powell’s black-and-white depictions of these tensions are striking, whether he portrays the brutality of a beating or the close-up furrowing of a brow.

Meanwhile, the 1958 MLK comic book cited in March has lived on: it was recently translated into Arabic by an Egyptian activist promoting civil disobedience during the Arab Spring. March, dedicated to “the past and future children of the movement,” is also likely to prove inspirational to readers for years to come. Last month, Congressman Lewis promoted his graphic novel at Comic-Con, where, clad in a suit and tie among the fanboys dressed as their favorite superhero and sci-fi characters, he was an unexpected hit.