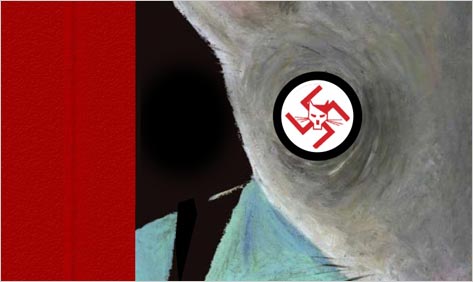 Among those of a certain age, is there a soul who doesn’t remember how brilliantly Maus lit up the night when it burst upon the scene in 1986? A deeply serious comic strip of the Holocaust before the category of graphic novel was common coin, with Jews depicted as timorous mice and Nazis as bestial cats, Maus was scandalous in concept, jaw-dropping in execution, and, beneath its transgressive exterior, humbling in its rigorous yet gentle understanding of the victims of one of the seismic events of the twentieth century.

Lest you’ve forgotten any part of this, Maus mastermind Art Spiegelman is publishing MetaMaus to mark the twenty-fifth anniversary of the original. And after a quarter of a century, the work still provokes spellbound fascination and anguish in equal measure.

As a fellow member of the so-called Second Generation, or children of survivors, who’ve written books on the subject so central to our lives, let me attest to how handily the original Maus beat us all to the punch. Spiegelman’s first version was actually published fourteen years earlier as a three-page underground strip in 1972. To put it in the proper time frame, this was during an era when the word Holocaust was scarcely spoken in polite society. The general public was locked in ignorance. Survivors were choked by a sort of guilt-by-association shamefulness. The Eichmann trial was only eleven years in the past; the taboo-breaking Holocaust TV miniseries six years in the future. As a measure of how traumatic the events of World War II were, the American Jewish community as a whole remained so shell-shocked that they had barely begun the supernatural task of processing it. Along came Spiegelman’s distinctly un-Disney-like hordes of mice to jolt us from our complacence, its first volume (My Father Bleeds History) in 1986 and its second (And Here My Troubles Began) five years later.

Like a director’s commentary track, the new MetaMaus provides a kind of behind-the-scenes “Inside Maus” that rewards us with insights this reviewer, for one, was too blown away to perceive the first time around. It’s built on a very distilled and definitive four-year-long interview with “associate editor” Hilary Chute, who deserves more credit than she receives (she’s not even listed on the front or back covers) for posing exactly the right questions, such as this one: “Were there times when you felt that perhaps comics wasn’t the best medium for your father’s story?”

Answer: “I came up against things in Maus that involved imparting general information, and those were the moments when I would despair and think: Well, maybe I should just do something that’s a combination of prose and comics, use comics when it’s appropriate, and just typeset pages of prose when that seemed appropriate. But that would have been a real cop-out.”

And this: “Aside from Expressionism, what aspects of visual or literary modernism have you found productive?”

Answer: “I was interested in the fact that us low artists [i.e.. cartoonists] were the only artists still interested in drawing the human figure when all of modernism was moving away from that.”

The book is filled with similar revelations, such as the eccentric nature of Spiegelman’s influences. These embrace not only the German-born American artist Josef Albers (his “concern with retinal information rather than drawing per se”), but also “Little Orphan Annie” (which “offered me a more direct validation that comics could actually carry emotional resonance despite, or probably because of, the abstraction of the language and visuals”), as well as Mad magazine pioneer Harvey Kurtzman, whose sensibility Spiegelman credits with radicalizing “what we now think of as humor.”

Along the way, Spiegelman provides a glimpse into his years of apprenticeship, as well as a graduate-level course in comics semiotics: not only how eye movement works on the page, frame by frame, but how the graphic architecture serves in specific cases to deliver the narrative. As such, it is nothing less than a treatise on the rhythm and grammar of comics storytelling. The visual vocabulary he utilizes turns out to be more ingenious than you (or I, at least) ever suspected. Who knew, for instance, that on one page the smoke from the narrator’s cigarette was meant to be subconsciously seen as smoke from the crematorium in the panel below? (Another throwaway revelation: “I do believe that the self-destructiveness of my smoking is not totally unrelated to the secondhand memories of secondhand smoke” his parents breathed from the crematoria.)

In fact, Spiegelman doesn’t so much rapid-fire his replies as he chain-smokes them, one after the other, torching one eye-opener from the spark of the previous. On how he managed to condense such encyclopedic information into two volumes: “Maus could have been ten times longer if I’d just not tried to pack it as tightly.” On why he chose this most daunting of topics to begin with: “My work life has mostly consisted of finding the hardest thing I’m capable of doing to placate the Hanging Judge within. I wanted a challenge worth meeting as I turned thirty, and Maus qualified.”

(More about that Hanging Judge: “Drawing doesn’t come easily to me — maybe I’m lazy like my father always told me I was.”)

Most important, he manages to explore the fluidity of the fiction/nonfiction divide that inevitably plagues historic narrative, and to confirm that they are not as easily segregated as naïve commentators would have us believe. Acknowledging that “memory is a very fugitive thing,” he cobbles a workable reply to those who insist on its rigidity. “I still puzzle over what fiction and nonfiction really are. Reality is too complex to be threaded out into the narrow channels and confines of narrative and Maus, like all other narrative work including memoir, biography, and history presented in narrative form, is streamlined and, at least on that level, a fiction.” To flesh out his point he shares the delicious anecdote of how, before The New York Times Book Review saw the light and acceded to putting the book on the nonfiction side of the bestseller ledger, one benighted editor argued, “Well look, let’s go out to Spiegelman’s house and if a giant mouse answers the door, we’ll move it to the nonfiction side of the list!”

Fortunately, more enlightened minds prevailed. The result has forever helped redefine our attitudes toward history and the art that attends it.

Daniel Asa Rose is the author of the acclaimed Holocaust memoir Hiding Places: A Father and His Sons Retrace Their Family’s Escape from the Holocaust (Simon & Schuster), based on a trip he took in 1988, two years after the publication of Maus.