By HÅKAN NESSER; Translated from the Swedish by LAURIE THOMPSON 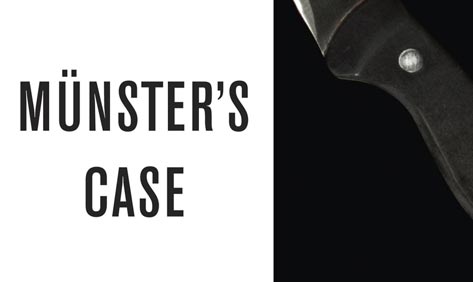 The prevailing mood of Håkan Nesser’s new novel, Münster’s Case, is deflated, exhausted, and resigned; just what we have come to expect when we open a Scandinavian crime novel. “It was nearly half past eight, but it was obvious that it was going to be one of those gray, rainy Sundays when it never really became light,” Nesser writes of an autumn day in Stockholm. “One of those damp waiting rooms.”

In this monochrome world, sunshine, like optimism, is fleeting and unreliable. But the gloom that Nesser creates is not merely a literary convention. Deftly conjured up in a few plain sentences, this subdued atmosphere is also oddly — and disturbingly — intimate. Its gray weight seems to shrink the distance between killer and victim, between violent death and everyday life. The crime scene in Münster’s Case, for example, is as banal as this: “A hodgepodge of bad taste on the walls, furniture of the cheap fifties and sixties style. Separate bedrooms, bookcases with no books, and an awful lot of dried blood in and around Leverkuhn’s sagging bed.”

Seventy-two year old Waldemar Leverkuhn, drunk after a night out with old friends in his local bar, has been stabbed almost thirty times in his own bed. Was he murdered for his recent lottery winnings? For revenge? As young Inspector Münster and his team interview Leverkuhn’s widow, his adult children, and his friends, all straightforward explanations recede. “You don’t need to have a motive for killing anyone nowadays,” one detective observes, and Münster agrees: “Motives are beginning to be a bit old-fashioned.” There is a motive, of course. It emerges incrementally as Leverkuhn’s past is examined, but Nesser, sly as ever, also makes the resolution profoundly shocking. To reach it, Münster turns for advice to his mentor, Inspector Van Veeteren, the protagonist of Nesser’s previous novels in this series.

“Things seem to be pulling in different directions,” the philosophical Van Veeteren tells Münster when asked for his opinion. “The threads seem to be unwinding instead of coming together.”  By then, a second murder has been committed, and the body parts of a professionally butchered corpse have been stumbled upon. An astonishing act by Leverkhun’s dowdy, expressionless widow takes the novel temporarily into the courtroom, yet even then Nesser keeps the plot off balance and vibrating with unease.

A jury’s verdict is not the same thing as the truth; that appears to reside among Leverkhun’s three children. One daughter is in a mental hospital, the other daughter and son are as unremarkable as the dull parents with whom they had little contact. In scenes that are both delicate and unadorned, Nesser presents the Leverkhuns in all their drabness and then gradually allows us glimpses of their turbulent inner lives. “Something had come home after a long journey,” their mother reflects as her own life is about to end abruptly. Münster suspects it is the murderer that had come home, and this suspicion proves almost fatal as Nesser smoothly heightens the tension without disturbing the surface of this brutal, compassionate novel.

Previous Previous Post: The Underwater Welder
Next Post: Loverly: The Life and Times of My Fair Lady Next