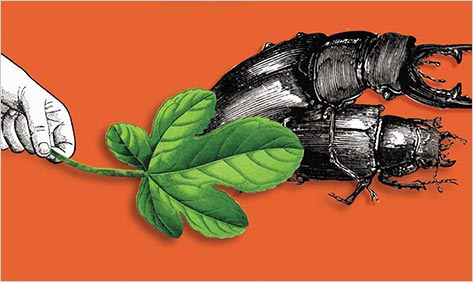 Ahem, everyone: get ready to look closely at some of nature’s weirdest private parts. Or rather, get ready to look at how evolutionary biologists have begun to look at them. I say “begun,” because the science of looking  closely at genitals is recent. Even science has its blind spots, some of them culturally created. Hence, the odd fact that although sex is the only engine by which any individual can pass on heritable traits, biologists have been slow to examine the organs of reproduction themselves. Indeed, although Darwin and his early followers made news studying so-called secondary sex characteristics — plumage, wattles, mating calls, and the like — they politely averted their gazes from genitals, the prime sources of our  lives as primates, the very parts that let us get it on in the first place.

As the charmingly named Menno Schilthuizen points out in his new book, Nature’s Nether Regions, this has been an enormous lapse. It turns out that the evolutionary bolts and, well, nuts, of animal reproductive organs are extremely fascinating. Genitalia are richly varied: they come in an incredible array of sizes and shapes that themselves blur the distinctions between primary and secondary characteristics. In fact, genitalia are so richly varied across species that it seems downright incurious not to ponder their co-evolution with mating. Given the vast ranges of shapes among and within genii, great evolutionary forces must be at play. For the last three decades Schilthuizen and other biologists have been — pardon me —  hard at work figuring these out.

It turns out shape matters, but we may only be beginning to learn why. First, genitals are markers that often most clearly separate species. Seemingly identical beetles may have vastly different penis shapes, which imply different vaginae, different mating structures. Why? For a while biologists considered a kind of “lock and key” model — where the shapes of certain species’ organs were meant to keep other species out. But biologists now know that variation is more than about simply rejecting the wrong species: for males, it is about perfecting what Schilthuizen rather sweetly calls “internal courtship rituals” based on getting one of their many sperms to win the great mating race. By contrast, female genitalia themselves are actually, in many cases, designed to exercise a kind of influence over which sperm gets access to the highly valuable egg. Females, it seems, control the game, not only from without but also from within their own bodies. They do so in ways we might not expect: female goblin spiders can hoard the sperm of many mates in various receptacula until deciding which to use, often long after the act. Nematode females sperm-dump, blatantly rejecting sperm they don’t want. Female crickets eat the stored sperm of previous crickets to clear space for a new mate. Our fellow primates seem able to trigger terminations of their own pregnancies. And yes, Schilthuizen says, what studies we do have show human women are more likely to get pregnant when a man’s most recent internal courtship ritual has resulted in orgasm.

Schilthuizen’s in tricky waters here, touching on science that has social implications, but he treads lightly, moving from what we know about nematodes and mildly theorizing what we might be learning about our own lives. In fact, because this is a survey of the whole animal kingdom, don’t expect one catalog of rules. Rather, Schilthuizen whizzes between geographies and species, learning from apes, slugs, spiders. In the process he invites us on all kinds of interesting adventures, from finding ancient beetle genitals trapped in amber to examining barnacles depositing their sperm with eight-foot-long appendages.

It’s occasionally overwhelming. There’s a lot of sex described in this book, but not all of it sounds very sexy. One has to wade through phrases like this one about spider copulation: “Locking the pedal into the epigyne requires the laborious inflating of the so-called hamaodocha.” Or, about the nematode: “Having located the vulva, he then inserts his spicules.” (Eek!) Occasionally Schilthuizen’s metaphors are over-endowed: “Sexual selection [is] in the driver’s seat steering the evolution of animal’s genitals along a winding road curbed by the limits of natural selection….”

A note: This field is in its infancy. This is a book about heterosexual sex between animals, but Schilthuizen hasn’t closed the case on other kinds of sex driving animal evolution, too. Ever excited, ever open-minded, he pushes towards new frontiers. “With homosexuality so rife in the animal kingdom, it is likely that other ways exist in which same-sex mating may have an impact on genital evolution, none of which has yet been investigated by biologists.”

One message that comes through loud and clear: Size doesn’t matter, or rather, it is better (from an evolutionary perspective) to have genitals roughly the same size as everyone else’s. Then there’s this biological proverb that goes on being true, generation after generation: “A male that is able to persuade (a female) to give up her stored sperm reserves probably has qualities that she’d do worse than to pass on to her sons.” Ah, well. It’s not quite Jane Austen, but it makes the species go on.