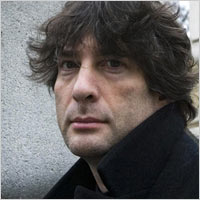 One of the most celebrated among contemporary fantasists, Neil Gaiman’s unique body of work spans the worlds of novels, short stories, children’s books, comics, plays, and film. From his groundbreaking Sandman series of graphic novels, to dreamlike tales such as American Gods and Coraline, Gaiman employs an apparently supernatural ability to weave together haunting visions with sprightly humor and gripping storylines across ages and genres: His most recent novel The Graveyard Book, has garnered not only the Hugo Award but Newbery and Carnegie medals as well. Here is the author himself on three of his favorite books for readers of all ages.

“Mowgli, the little frog, raised by animals in the Jungle. Kipling writes about wildness and the borders, and turns the jungle into a world. The other short stories are wonderful as well. Kipling could use language like nobody could.”

“Only one English Poet Laureate also wrote wonderful children’s books. Masefield took his hero Kay Harker through time and space in this magical adventure, as one brave boy is all that stands against the forces of black magic in their quest for the Box of Delights.”

“They let me introduce this fabulous concoction by America’s greatest humorist. Part poem, part fairy story, all perfectly unique, a story made to be read out loud. In a castle of frozen hearts and time, where the clocks are stopped and the fair Saralinda is kept prisoner by an evil Duke, can a minstrel and a Golux save the day?”