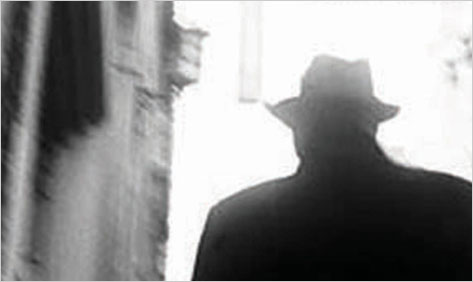 Maybe it’s because I live in a part of the world where Garrison Keillor is on the radio ten times a week, but as I read Robert Coover’s new short novel Noir, I couldn’t help thinking of Guy Noir, the house detective on A Prairie Home Companion. Coover’s operator is named Philip M. Noir (we never learn what the M stands for), and although Phil is emphatically unsuitable for all audiences, if you set aside the necrophilia, the pedophilia and the cussing, he and Guy might be brothers. Both Noirs are men past their prime, post-heroic ironists who know, as Coover puts it, “plenty about getting sucked into stories that have already been told.”

Noir is one of those stories. The plot revolves around a rich and beautiful widow, an ex-client of Noir’s, who turns up dead, then disappears from the morgue; the prime suspect is the elusive Mr. Big, a/k/a Ignis Fatuus, or, as Phil Noir calls him, Fat Agnes. There’s a supporting cast of barmen, mean cops and helpful women: Flame the torch singer, Noir’s assistant Blanche, who loans her boss her underpants on more than one occasion; and the hapless Michiko, a prostitute who has become a human canvas where two yakuza bosses vie to top each other’s tattoos. The threads of plot that tie these people together are hopelessly tangled, and the narration skips around in time so much that chronology comes to seem like just another slap-happy witness, crying out my mother! My sister! more or less at random. “Connections,” the narrator thinks, or has “you” think — the story is told in the second person, a kind of Dim Lights, Big City — are “probably an illusion in such a fucked-up world as this.”

Coover, a brilliant reteller of tales (see his short-story collection A Child Again if you don’t believe me), isn’t the first literary novelist to deconstruct the noir, nor will he be the last. The detective story tempts every writer who’s ever tinkered with a plot, and of all the varieties of detective fiction noir has the best characters, the darkest settings, the most sex. What Coover brings to the faux-noir genre is a collection of seductive sentences about the seductive power of, well, sentences:

Your buffeted mind, its shell sapped, was incapable of pondering. It was more like an imageless dream about pain and the city. Almost imageless. You were being dragged through an old film projector. Your mazy crime-ridden gut was on view somewhere. Your sprocket holes were catching, tearing. Your head was caught in the mechanism.

The image is compelling, and not many people can write a phrase as tight as your mazy crime-ridden gut. The question you don’t want to ask is whether it amounts to more than that. Whether self-aware pastiche is at this point an old man’s game, like shuffleboard, played by people who’ve lost their appetite for more vigorous sport. To ask that question would be to peek behind the novel’s scrim of shadows, and maybe to see nothing at all, or only the projector’s wheels, still turning.