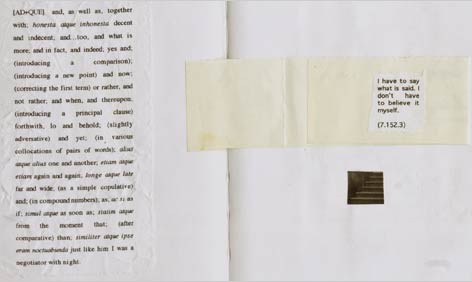 No one does fragments — glimpses of ontological questions, of minutiae, of pop culture, ancient civilization, of passion, sorrow, life and death — quite like Anne Carson. The most obvious examples are her translations of the poet Sappho’s fragments in the luminous If Not, Winter (2002), but these are really only the continuation of a long fascination with all that remains unknown. As far back as her earliest poetry and essay collections, Eros the Bittersweet (1986), Glass, Irony and God  (1992), and Plainwater (1995), Carson has always, alongside more traditional prose and verse, trafficked in what remains necessarily partial and unfinished in life. She faces the voids that many of us prefer to turn away from, and this gives her work a rare urgency. After all, as she writes while trying to craft a final resting place for her brother, the subject of her extraordinary new book, Nox, “We want other people to have a centre, a history, an account that makes sense. We want to be able to say This is what he did   and Here’s why.”

Of course, we cannot, though in Nox Carson gives it perhaps the best try I’ve ever witnessed. What she arrives at is all the more impressive for how little she has to go on. Nox is a reproduction of the scrapbook Carson put together after her brother, whom she hadn’t seen for over twenty years, died in 2000, just as she was planning to visit him after a recent reconnection. A collage of words, stamps, old letters, photographs, and artwork in various mediums — all copied with amazing effect onto a continuous accordion-folded length of paper and encased in what transcends its boxy gray cardboard form to become nothing less than a sarcophagus — it’s Carson’s “epitaph” to her lost sibling. On its cover, he stands guard in a photo taken at about ten years of age, obscured even then by a pair of dark swim goggles that cover most of his face. He “ran away in 1978, rather than go to jail,” she writes. “He was traveling on a false passport and living under other people’s names. This isn’t hard to arrange. It is irremediable.” This fragment, one of the few pieces of hard information we get, appears on four pages in a row, accompanied by various snippets of the one letter he wrote home to Carson’s mother during his absence, as Carson tries to give her story a start.

It turns out, as the effort to impose order so often does, to be a false one. “I wanted to fill my elegy with light of all kinds,” Carson admits in the first prose section of the book, labeled “1.0” and offered up in a plain font on a small scrap of paper with rough edges that looks as though you could easily pick it right up off the page. “But death makes us stingy. There is nothing more to be expended on that, we think, he’s dead….No matter how I try to evoke the starry lad he was, it remains a plain, odd history. So I began to think about history.”

For Carson, “history” has always meant classics. (She is a classicist by training, and, as she puts it in her marvelously understated author bio, she “teaches ancient Greek for a living,” which is as perfect an example of Carson’s mysterious, jaunty style as anything that’s appeared between book covers.) So here, too, she turns to Catullus, whose elegy for his dead brother appears, slightly smudged and on yellowed paper, in the original Latin, as the first item in Nox. As the scanty details of her brother’s life unfurl, alongside them run translations of each word in Catullus’s poem, a record of Carson’s work that provides its own wealth of fragmentary attempts at meaning in an echo of her efforts to grasp her brother’s life. Each one adds new layers to our understanding of her grief. For example: “multas: multa lux, broad daylight, multa nox: late in the night, perhaps too late” and “ipsum: himself (herself, itself, oneself, etc.) as opposed to others…the actual himself (herself, etc.) as opposed to persons more remotely connected; the real state of affairs, the fact, reality…ipse tristis the sad one.”

It isn’t until more than halfway through the book that we get the complete translation of the poem (it appears on the endpaper once more, blurred virtually beyond reading), and even then, she confesses, “No one (even in Latin) can approximate the Catullan diction, which at its most sorrowful has an air of deep festivity, like one of those trees that turns all its leaves over, silver, in the wind. I never arrived at the translation I would have liked to do of poem 101. But over the years of working at it, I came to think of translating as a room, not exactly an unknown room, where one gropes for the light switch. I guess it never ends. A brother never ends.”

This is where Carson’s gift for fragments gathers force. While the Catullus poem is moving in its own right, it bears the mark of closure — its final words are “farewell and farewell” — and as such is final. Carson’s gestures towards understanding are ever in motion, like those gilded leaves, and the bits and pieces that make up her grief take on a shimmering currency in her hands. They may not add up to a whole in the traditional sense, but they overwhelm Catullus’s elegy by a landslide with their raw, open-edged emotion.

Carson knows, as anyone who’s lost someone they love knows, that there will be no end to the trying to make sense, no end to the sorrow and the mystery that come with death. “He refuses, he is in the stairwell, he disappears,” she offers on her final page, conjugating her loss in some deeply resonant private language that needs no translation for us to comprehend. Like someone who has died, her creation both bestows a great depth of knowledge and leaves us longing for more.

Melanie Rehak is the author of Girl Sleuth: Nancy Drew and the Women Who Created Her. Her new book, Eating For Beginners, will be published in July of 2010.