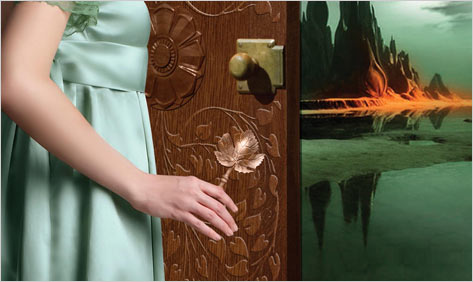 Before I take you gallivantingoff to visit a trio of marvelously imagined otherworlds, let’s drop in on apacked conference hall in Hamburg, Germany, in the 21st century. At aconference of writers, scholars, and lovers of the fantastic in the artsearlier this fall*, my colleague the novelist and critic Brian Stablefordoffered the term “heterocosmic creativity,” as a big tent that mightcontain the wide-ranging topics that were on tap that day: Utopias, vampires,and alternate histories; Star Trek, Percy Jackson, Lord of theRings; Paul Auster, Max Ernst, Lady Murasaki.

Whereonce this set of literary interests might have been the province of only adedicated sub-group, connoisseurs of the unreal, it seems undeniable that thefantastic flourishes today as never before. The bestseller lists and thebox-office receipts testify to the dominance and popularity of heterocosmiccreativity in all its guises, the more fantastical the better. In fact, thattype of heterocosmic literature known as science fiction, whose signature trickwas always to blend naturalism with the speculatively outré, has declined inpopularity over the years in the face of pure fantasy, which frequently turnsits back completely on science, rationality, logic, and plausibility.

Butdespite the current outpouring of heterocosmic creativity—or maybe because ofit!—fantastic literature, like any human endeavor, finds itself stillmanifesting Sturgeon’s Law, which famously mandates that “Ninety percentof everything is crud.” In a disposable welter of sexy werewolves,enigmatic elves, and juvenile wizards, the truly original and finely craftedwork often gets lost.

Here,then, are three recent novels, embedded firmly in the mainstream of commercialfantasy, that nonetheless stand out above the flood.

GalenBeckett, author of the beguiling and charming The House on Durrow Street and its predecessor, TheMagicians and Mrs. Quent, is in reality a writernamed Mark Anthony, with six prior books to his legal name. I must confess thatmy glancing encounters with his early work left me uninspired, as they seemedgeneric high fantasy. So the name change and relaunch—often a strategy to dealwith disappointing sales and unfair audience perceptions—was probably anecessary and good thing, catching readers like myself with our prejudicesdown. But of course, the tactic would have been worthless without a substantialnovel or three behind it, and those goods Beckett provides in spades.

Thetwo books so far in this series (with a third, The Master of Heathcrest Hall,due to round out the sequence), fall squarely under the category of”fantasies of manners.” This mode, emphasizing the loaded, codedbehavior of exotic societies in the manner of a Jane Austen or Georgette Heyernovel, received its biggest boost a few years ago from Susanna Clarke’s bestsellingnovel Jonathan Strange and Mr. Norrell, although talentedpractitioners such as Caroline Stevermer had flourished earlier.

Beckett’swinning conceit is that the demure politeness and witty banter and rigid matrixof social conventions prevalent in his pre-technological land of Altania reallyconceal a subterranean power struggle that is positively Lovecraftian. Beyondthe frayed curtain of mundane existence, a race of hideous elder beings knownas the Ashen are striving to return to the human world, aided by their mortalpawns. The only barrier to their triumph and the destruction of mankind arewitches such as our heroine, Lady Ivy Quent, her bold and stalwart husbandAlasdare, and good magicians such as Lord Rafferdy. But can Ivy Quent focusentirely on cosmic matters? Hardly, what with two younger sisters to marry off,a father in a madhouse, and a decrepit old domicile to rehab.

Successin such a mode of fantasy relies on walking a tightrope perfectly. On the onehand, the social interplay must ring true, and captivate the reader. On theother hand, the weird elements must exert their own attraction and potency. Toomuch cozy can spoil the grotesque, and vice versa. But Beckett maintains aperfect balance. The strivings and snubs and conquests of the parlor and tavernand palace—love affairs, dinner parties, debts, games of status—neverovershadow the otherworldly perils—the enigmatic figures in black, the loomingnew red star in the heavens, the titular house with its carved living eyes. Nordoes the occult huggermugger detract from the quotidian. They supplement eachother nicely: terror hidden beneath crinoline skirts.

PatriciaMcKillip is approaching the fortieth anniversary of her first novel, and shejust keeps getting better and better. Little prone to repeating herself, shenevertheless has fashioned a body of work that exhibits an overarchingconsistency and uniformity of tone and approach. Her novels have the force ofprimal fairy tales akin to those collected by Grimm or Andersen, with a modernsensibility that never becomes intrusive. She exhibits the same delicacy anddeftness and connectedness to the Ur-storytellers as did Lord Dunsany. Toborrow Dunsany’s famous phrase, she is joyfully at play “beyond the fieldswe know.”

Curiouslyenough, as if casting a ruminative look backward at her own long career,McKillip’s latest—The Bards of Bone Plain—deals explicitly withthe storytelling urge, finding much to say about why and how we tell tales, andwhere they fit into any healthy culture. Yet there is no smidgen of preachinessor boasting at work in her lovely narrative.

PhelanCle, about to graduate from his studies as a Master Bard, is unfortunatelysaddled with a drunken father, who is a starry-eyed antiquarian, and also witha bit of uncertainty about his career and future. Phelan finds all his problemsassuming starker magnitude with the arrival of a mysterious foreign bard namedKelda, who seems determined to upset the calmness and hierarchy at Phelan’sschool.

Butthis tale is not Phelan’s alone, as McKillip populates her canvas with a hostof engaging characters, with my favorite being Princess Beatrice, who, sharingthe love of antiquity exhibited by Cle senior, has “spent her life inholes,” being most at home after “fleeing out the nearest door of thecastle after she had pulled on her dungarees and boots.” If I tell youthat Beatrice’s mother is named, perfectly, “Queen Harriet,” you willsee the kind of expert characterization and off-kilter humor that McKillipdelights in.

Everyother chapter in the novel takes place in the deep past of Phelan’s world,following the career of the seminal Bard named Nairn whose biographical detailshave been darkened for Phelan and his contemporaries by the passage ofcenturies. Eventually, in a surprising and clever move, the tail of the past isbitten by the jaws of the future, making a beautiful circle of events,thematically and plotwise.

McKillipknows and shows the rigors and challenges, traps and rewards of the creativelife. By establishing a dialogue between the “purer” past of herworld and its oh-so-slightly overcivilized present, McKillip speaks to our ownera’s ultra-commodification of storytelling, and, in one of the signature movesof good fantasy, highlights a path toward reinvigoration of that which hasgrown stale.

Atomboy princess, the tension between a storied past and a troubled present, andthe angst that accompanies finding one’s place in the world also crop up inRobin McKinley’s new book, Pegasus, but in a fashiondecidedly different from the same set of tropes in The Bards of Bone Plain.Whereas McKillip is writing sophisticated, modern-day kindermärchen, McKinley is turning out something much closer, atits core, to science fiction, the fantasy-tinged kind pioneered by Andre Norton in such classics as TheBeast Master and Witch World. Despite its Neverland setting,McKinley’s novel might well have been placed on a human-colonized alien planet,and in fact blends the world-building of Poul Anderson with the anthropologicalexplorations of Michael Bishop in such works as”Death and Designation Among the Asadi,” all under the capacious fantasycanopy. And of course, Anne McCaffrey‘s Pern novels will also comeimmediately to mind.

PrincessSylviianel—Sylvi for short—is the fourth child and only daughter of the rulersof a human kingdom whose aboriginal allies are pegasi: winged horses. But notthe classic Greek icons. Here’s a description of them:

Pegasilooked almost like four-legged birds, standing next to horses. Their necks werelonger and their bodies shorter in comparison, their ribs tremendouslywidesprung for lung space and their shoulders broad for wing muscles, buttapering away behind to almost nothing; their bellies tucked up likesighthounds’, although there were deep lines of muscles on their hindquarters. Theirlegs seemed as slender as grass stems, and the place where the head met theneck was so delicate a child’s hands could ring it…

Definitelyalien, a bit creepy, and almost insectile. Not your off-the-shelfwish-fulfillment cousins to unicorns. It’s a tribute to McKinley’s powers ofdepiction and characterization that she makes the reader experience Sylvi’sunique bond with these exotic creatures. The girl—twelve years old at story’sstart, sixteen later on—is the first person to be able to converse via a fluidtelepathy with these sentients, starting with her specially bonded partner,Ebon. (One gets the sense almost that Sylvi is a mutant, the first of her kindin eight centuries, another SF riff.) Sylvi’s unprecedented connection with thepegasi leads to a paradigm shift in the culture, in which she assumes her truedestiny.

McKinleyis explicit that her tale is a parable of race relations. (Did I mention thatEbon is a rare black pegasus?) The magician Fthoom objects to Sylvi’spowers: “‘The two races are too dissimilar; any attempt to draw themtogether can only do injury—the incomprehension between our two peoples is awarning we ignore at our peril.'” Unconventionally, however, McKinleyportrays neither humans nor pegasi as oppressors or oppressed, but as equals inunfamiliarity and cloisteredness. No shame or guilt or anger encumbers theirrelationship, only ignorance and lack of outreach. It’s a refreshing changefrom the imperialist Avatar template.

Anothersubtext that is acknowledged glancingly, but is just as vital, is that of Sylvi’sadolescent sexual awakening—and interracial sexual awakening at that. Substitutelovemaking terms for flying terms in the passage below, and the import isapparent.

Wouldit be so terrible if we were found out? If it was known that we went flyingtogether? But she remained silent because she knew the answer: Yes, because itwas forbidden. Yes because if they tried to claim that they had not beenexpressly forbidden to go flying together it would mean they were irresponsiblechildren. And yes because everything about the unprecedented strangeness oftheir relationship was risky, because some people were frightened bystrangeness.

Quite a weighty freight for whatpurports to be a simple YA fantasy. But illustrative of just how much realsubstance true heterocosmic creativity can contain, when cliché and imitationare left behind.

* Theconference in question was the German Conference on the Fantastic, held inSeptember of this year at the University of Hamburg and masterminded byProfessor Lars Schmeink. It was the inaugural affair of the newly foundedGesellschaft für Fantastikforschung, or GFF, and was inspired by thelong-running International Conference on the Fantastic in the Arts. You can visit the GFF Facebook page here, and the IAFA site here, for more information on eachorganization.