By NICHOLAS A. BASBANES 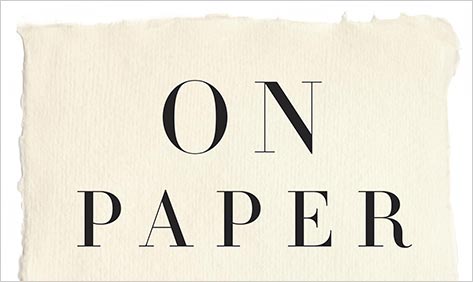 “Papers, please,” said the man in the uniform, and don’t take too much comfort in the “please.” Before we had those for-better-or-worse unique biometric indicators that prove who we say we are — fingerprint scans and voice recognition devices and DNA tests — we had paper, paper proof, beautifully calligraphed letters of safe conduct that morphed over time into high-tech passports — holograms, security threads, photographs so baboonish you wished they were fake — which with enough entry and exit stamps and visas are still items of beauty and deliverance, facilitating transport across space and mind.

For as the self-confessed bibliophiliac Nicholas Basbanes points out in his natty, bright, and good-humored On Paper: The Everything of Its Two-Thousand-Year History, paper has been the mode of choice to transport information — personal letters, last wills and testaments, transit documents, court summons — for century upon century, and is still the go-to substance when, as a government worker, soldier, or journalist, there is need to “cover your ass with paper” — though there’s always a risk that same paper trail will burn its way back to you, and your backside.

Yet paper’s existential impact has been no less profound: as a medium allowing us party to the wonderful turbulence from which ideas emerge — the blinding insight recorded on a diner napkin or book margin; as an enemy of oblivion, it opens a window into the creative process of embellished doodling: “In Leonardo’s [da Vinci’s] case, it also relies on the serendipity of the image that appears, which may suggest other things. There are famous passages where he talks about seeing images in stains on walls, so he realizes that by crashing things down on paper, the kind of graphic collisions that result can themselves suggest inventions” (Basbanes quoting Oxford University’s Thomas Kemp).

Anyone who has ever conducted research at a serious archive —  and that can be a small-town historical society as well as the National Archives —  has likely felt the power of paper, the color and smell of the fiber as well as the import of its cargo. Hold the raw notes of the artist, composer, engineer, mapmaker, mathematician, inventor, bomb maker — this is paper at its most dynamic, sensitive, and aware, working its way forward for the creator through the eddies of line and thought, and for the researcher a way back to genesis. Here is paper as witness, as testimony, to human deeds: the Dreyfus memorandum, the Zimmerman telegram, Whitaker Chambers’s Pumpkin Papers, Julius and Ethel Rosenberg’s nuclear design sketches, the Pentagon Papers, WikiLeaks.

But first, you have got to make the stuff, and it was a long time coming, after the cave walls, clay tablets, and papyrus, after all the many wrong turns, nice tries, and dead ends — banana peels, walnut shells, seaweed, moss, cabbage, thistle, tulips, nettles, potatoes — for a substance as rudimentary as no-knead bread: clean water, cellulose fiber, and a mold. Basbanes elegantly charts paper’s textbook diffusion — as gratifying as tracing the London cholera epidemic to that water pump in Soho — from its origins in China in the second century A.D. (although fragmentary archaeological evidence recovered from a Shaanxi tomb dates to about 140 B.C.). First the technique headed east to Korea and then Japan (where it hit pay dirt, as anyone who has marveled at Japanese paper works will agree), and westward too, along the Silk Road to Central Asia, to Samarkand, Baghdad, Damascus, Cairo, and Fez, jumping to Spain in 1056, then throughout western and central Europe until it crossed the Atlantic to the eastern seaboard of the New World in 1690, the same year the process reached Australia and the remote oceanic islands. Later it reached Texas.

Paper as an art form and paper as history are glories — there are terrific chapters on origami and its votaries, the story of rag to paper pulp to feed the needs of American colonists to behave seditiously in their newspapers, and how Islamic countries forsook the printing press out of reverence to calligraphy (they may also have taken exception to the theft of mummies’ winding sheets for linen fiber to make paper) and paid the technological price — but Basbanes also gives due consideration to the everyday paper landscape, the 20,000 commercial uses, like rolling papers. Where would we be without Kleenex and Kotex and, most certainly, toilet paper? Basbanes is only too happy to tell you: back feeding the old “fecal-oral route,” that’s where, and playing conduit to typhoid, dysentery, and a whole ruinous family of infectious diseases.

Paper is spectral — now a ghostly lantern sent aloft to the delight of parted ancestors, and now a balloon of mulberry paper ferrying an incendiary bomb 5,000 miles across the Pacific Ocean to burn an American city. And, in Basbanes’s affective closing chapter, paper is memory. Early on the morning of September 11, 2001, I stood between Gold and Pearl streets in a blizzard of paper, as weird and ominous as a rain of frogs. Somewhere in that paper storm, now saved in a memorial museum, is the last image in Basbanes’s book, a scrawled note: “84th Floor west office 12 People trapped.”