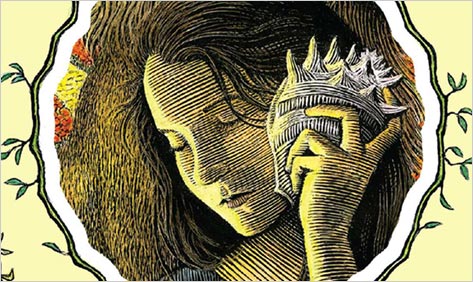 Six years have passed since Dorothy Gale crash-landed in Oz, killed off the two wicked witches, East and West, and, clad in those ruby slippers, launched both L. Frank Baum’s beloved fable and Gregory Maguire’s brilliant reimagination of the story.

For the rest of us it’s been 16 years since the publication of Wicked. We’re now one hit Broadway musical, three sequels, and seven million printed volumes into Maguire’s new Oz. With the publication of Out of Oz, the marvelous fourth and final book in Maguire’s series, the doors to this rich universe are about to close.

The book begins as Baum’s original novel did, with a hapless Dorothy landing in Oz. She’s 16 years old this time, launched into her former stomping grounds by the San Francisco earthquake of 1906. (Instead of crushing a witch, she kills a cow.) Still a bit simple, sowing chaos wherever she goes, Dorothy is welcomed back to Oz with a trial, in which she’s convicted of the double murders she committed last time around.

Life hasn’t been kind to Dorothy’s former cohorts. Munchkinland has seceded from Oz, and the two are on the brink of civil war. Good witch Glinda is under house arrest as a possible traitor. Brrrr, the now not-so-Cowardly Lion, is a fugitive. Here’s Brrrr, hiding in the shadows as he sees Dorothy for the first time in decades:

Either she’d become stunted by her experience in Oz a generation ago or some perverse magic was at work. Yes, she was quite recognizably Dorothy. Those cocoa-bright eyes. The way she led with her shoulders and clavicle. Surely she ought to be middle-aged by now? But she seemed merely a few years older than her remembered her. Taller but hardly leaner. Her baby fat had only begun to reorient itself into incipient womanliness. Her face remained eager and unshuttered even after latest travails. Proof of Dorothy.

Though it’s been just six years for Dorothy, a generation has passed in Oz. Elphaba, the witch of the West who Dorothy killed with a splash of water, has a granddaughter now. Named, ironically, Rain, she’s an orphan with no clue to either her great lineage or the power it gives her to win the fight for the soul of Oz. It’s Rain, this time, and not Dorothy, who makes the cross-country trek to Oz, in the company of a potty-mouthed dwarf, his human wife, and Brrr. A bit slow, perhaps, and certainly complex, the journey reveals not just Rain’s unique destiny, but ties up mysteries and loose ends from the three previous installments.

If you haven’t read the first three books, don’t worry. Maguire’s a generous author who provides synopses right up front. Maps, timelines and genealogies offer guidelines for neophytes and fodder for the obsessed.

The Oz series, which explores the universal truths on which fairy tales are built, would serve as political allegory for any stretch of history you’d care to name. Out of Oz, in particular, with its exploration of politics, power and corruption, speaks to the world we find ourselves in right now. But with the depth and breadth of the tale, the gorgeous writing, the sly wit and the wry and loving nods to the original source material, Out of Oz deserves to be read first as a novel. With the last page, we find we’re not in Oz any more, and while we’re all the poorer for that, we’re the wiser for having made the journey.