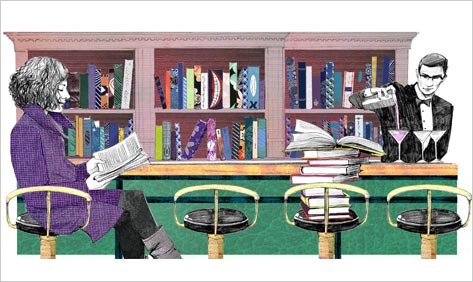 Imagine if your prom date and your ride to prom were one and the same. Sound too good to be true? Not if you’re dating the mythical half-man, half-horse creature known as a centaur. Fans of Twilight and fans of Misty of Chincoteague will come together at last to enjoy this edgy new crossover genre. In the blockbuster YA novel that will launch this irresistible new genre, Playing Centaur Field, sexy centaur Luke is the new horse-boy in town, and sparks fly when he knocks on the door of Alana, his beautiful next-door neigh-bor and asks to borrow some sugar-cubes. Will Luke and Alana be able to concentrate when they become lab partners in biology class, or will he startle at a loud noise, kicking over a tray of test tubes with his hind legs and ruining weeks of hard work? Will Luke find the confidence to tell the school’s biggest bully to stop trying to enter him in the Kentucky Derby? Will Alana realize that he’s only nuzzling that cute blonde in his history class because he thinks she has carrots? The possibilities of the centaur-themed novel are endless—and you can bet one of these books will be galloping into your heart before long.

Many women love the strong, silent type — and few types are more silent than the intriguing mime. Strong may be a different story; no matter how snazzy he may look in suspenders, our mime hero’s inability to escape from an invisible box indicates that he’s not exactly a muscle-bound powerhouse. Still, the resourceful mime manages to be devastatingly charming without saying a word– and he knows how much women love flowers; even if they are invisible. In the most popular mime-fiction novel so far, Re-Mime Me To Love You,  the female protagonist, Gabby, struggles to come to terms with her failure to communicate effectively — or at all — with her lover, Hans. Hilarious misunderstadindings ensure. Gabby thinks Hans is praying when he is actually proposing, and when he indicates putting a ring on her finger, she thinks it’s an obscene gesture. Mark our words, once mime-fever hits readers, horizontal stripes and jaunty berets will be turning up in stores quicker than you can say, “Oh, I get it. You’re supposed to be driving a car. Yeah, that’s a good one.”

Trend-watchers have been waiting years for the ventriloquist romance to come into its own, and that day has finally arrived! In the breakthrough ventriloquist romance novel, Puppet Love, readers meet Angela, a beautiful small-town librarian whose faith in love has been shattered by a deceitful ex-boyfriend who broke her heart. Angela slowly learns to trust again when she meets a handsome ventriloquist, Byron, and his shabby wooden dummy, Patchpants McGee. If only she could get Byron alone, Angela just knows that love will blossom between the two of them. But somehow Patchpants always seems to be sitting on his lap! As Angela, Byron and Patchpants grow closer, they learn that three doesn’t always have to be a crowd.

Contemporary historical Western romance fans will love the grizzled 1890s-style prospector, who pans for gold even as he struggles to conceal his own heart of gold, dagnabit. In Midnight at Gully Gulch, the first of many 1890s-style grizzled-prospectors novels,  to be published soon (others include Eureka: A Vein of Romance, Mine Own True Love, and Big Nuggets),  ambitious young paralegal Caroline manages to land a coveted spot at a highly-respected law firm — but her new boss, a legendary defense attorney who has earned a reputation as a lothario, also happens to be a 1890s-style grizzled prospector named Canyon Pete. Before long, Caroline and Canyon Pete find themselves together on a business trip to an 1890s-style grizzled prospectors/lawyers convention where the rotgut and the sarsaparilla flow like water. Will Caroline resist the charms of her demanding new boss, or will she find herself in his arms, braiding his long white beard as he stakes his claim? We reckon you’ll have to read the book to find out.

Molly Schoemann is from New York City but now lives in North Carolina with her 1890s-style grizzled prospector husband and two dogs. You can find more of her work at MollySchoemann.com.

The B&N Podcast: Charlie Mackesy on our Book of the Year
Previous Previous Post: Brewing Rebellion
Next Post: Patrick Leigh Fermor: An Adventure Next