Program or Be Programmed 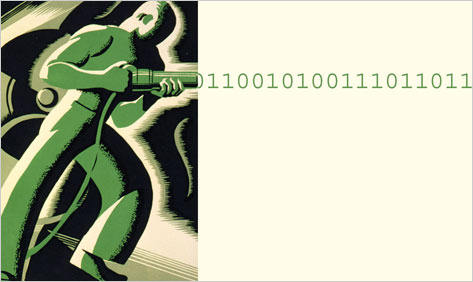 As oneof the first writers to understand the paradigm-demolishing impact of theInternet (Cyberia), Douglas Rushkoff has long been lumped in withthe web world’s cheerleaders. As this slim, cool-headed broadside makes clear,however, if Rushkoff was ever unambiguously thrilled about the online age, thattime is past. Confronted with the tsunami of content that he believes threatensour sense of reality, Rushkoff puts forth ten recommendations, or “commands”that he believes will help people thoughtfully navigate the new world.

Although Rushkoff’s dictacan read like a wired Emily Post (“Do Not Sell Your Friends,” “Share,Don’t Steal”), his aim is less to promote web civility than to encouragereaders to take back the Internet before it is fatally compromised by adesensitized, crowd-sourced, omnipresent cloud of Twittering, snarking,short-attention-span infotainments. Befitting its message of level-headedrationality, Rushkoff’s prose is cleanly bonded to his ten precepts, avoidingthe heavy-breathing fulminations often preferred in the digital debate. Whileacknowledging that the Internet is changing the species in ways unprecedentedsince the birth of the printing press, Rushkoff throws cold water on the gauzylibertarian fantasies promulgated by champions of social media. He slyly notesthat while creative people are expected to upload all of their work for free,the reality of web advertising means that somebodyis getting paid when this media is consumed, just not the creators. “Insteadof optimizing our machines for humanity,” he warns, “we areoptimizing humans for machinery.”

While Rushkoff’s answer—learnhow to actually use and program the machines that we spend so much of our liveson—is not likely to be taken up by many, his warning about the consequences ofpassivity is hard to shake.

Chris Barsanti is theauthor of Filmology. A member of the National Book Critics Circle, hisreviews and essays have appeared in The Virginia Quarterly Review, PopMatters,In These Times, and The Chicago Tribune.