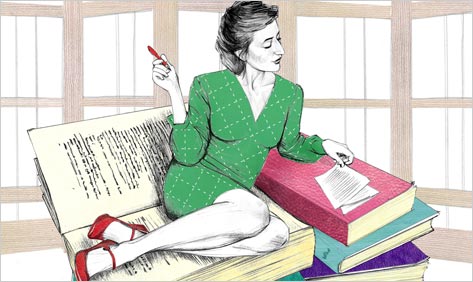 Recently, I married the love of my life. We decided it was best, though, to maintain separate residences. That sounds like the problem, doesn’t it? The reason I’m writing? It’s not. It works for us. And I’m tired of explaining why. My problem is this: Everyone I meet has an opinion about our living arrangements. And it’s never good. People — strangers and friends and family — can’t keep themselves from telling me it’ll never work, that he must be hiding something over there in his apartment. Or they’ll just pry for information, giving a shocked, “How does that work?!” and pushing for more and more when I try to say it just does. It’s like they want to convince me that it doesn’t, that I’m deluding myself. How long is this going to last?

Second: It sounds like what you’re really asking for is some literature to hand out when yet another person expresses their heartfelt concern for your marriage’s well being. Perhaps you should make up some business cards that read MIND YOUR OWN GODDAMN BUSINESS. No need to make these people read a whole novel whose message they might be tempted to miss.

Because your story sounds like the beginning of the story of Psyche and Cupid. Or, since Cupid makes it sound like Psyche was in love with a fat, naked, winged baby, let’s use his other name, Eros. Their arrangements were also a little unconventional — Eros, a god, did not want Psyche, a mortal, to see his true being and would only come to her in the dark — and her sisters were concerned. And refused to keep their concerns to themselves. Whatever must he be hiding? Maybe he’s not a god at all — he must truly be a monster. Their words infected Psyche until she too began to doubt her happy marriage. After she forced a confrontation, Eros left her.

C. S. Lewis said that this story “haunted” him throughout his life, until he felt compelled to rewrite the story from the perspective of the sister, and that became Till We Have Faces. Because in the original story, the sisters are motivated by pure envy. They see their sister living in a lavish castle in the presence of a god, and they want to destroy it. It doesn’t quite ring true, though, does it? I mean, sisters do sometimes envy and sabotage and undermine, but rarely so consciously. Rarely with such intent.

In Lewis’s telling, Orual, the sister, is the opposite of her sister. Psyche is beautiful and vulnerable. Orual is ugly and fierce. In stories like these, one compensates for a lack of beauty with wisdom or with strength. “If you are ugly enough, all men (unless they hate you deeply) soon give up thinking of you as a woman at all.” That is both Orual’s disadvantage and her advantage, and she becomes a great warrior. It’s not envy that drives Orual. She has her own thing going on. The primary difference between Lewis’s story and the older versions is that when Psyche invites her sister to Eros’s home, Orual literally cannot see it. It looks like a barren wasteland to her. Psyche talking about her beautiful home, the cozy fire, the love of her husband looks like madness to Orual. She has nothing in her past to relate this to, so what her sister sees as bounty she sees as deprivation. She acts out of a protective instinct, even if it is terribly misguided.

“Why must holy places be dark places?” Orual asks, unable to take her sister’s happiness on faith. Your friends, your family, people you meet at cocktail parties, will not always be able to take your happiness on faith. If you swerve from the expected, you can rely on people thinking you are a delusional twit — it just works like that. My advice, beyond the C.S. Lewis, beyond the telling people to mind their own goddamn business, is to lie. At least to strangers. Your family as well, if you have to. There is no need to open up your life for inspection. Make up a different story every night if you like, but protect your little home with your Eros from those whispering doubters. Domestic bliss is rare, and if it takes a little shrouding to keep it safe, so be it.