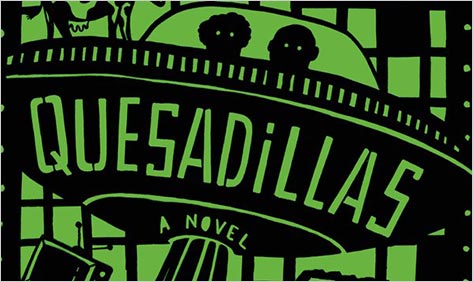 With punchy sentences and sniping comedy, Juan Pablo Villalobos appropriates the trappings of ancient Greek culture to contextualize the lives of an ironically rich, materially poor Mexican family. Seizing the spirit behind Marx’s slogan that history repeats itself “first as tragedy, then as farce,” Villalobos populates his second novel, Quesadillas, with a family in which the father saw fit to name the kids Aristotle, Orestes, Archilochus, Callimachus, Electra, Castor, and Pollux. Mocking his dad’s pretentiousness, Orestes, the second-eldest, says, “We were more like the index of an encyclopedia than a family.” This tension between dignity and shame is sustained throughout the narrative, lending it a gravitas that harmonizes beautifully with the novel’s madcap episodes.

A quarter of a century later, our narrator, Orestes, surveys  his thirteen-year-old-self, circa 1987. Besides having to make do in an overcrowded, asbestos-topped “shoebox” of a house, Orestes traces his early privations to being born in a “lousy country.” At the beginning of the story, he describes his hometown like so:

[The] place where I was born and grew up, Lagos de Moreno, in Los Altos, Jalisco, a region that, to add insult to injury, is located in Mexico. Allow me to point out a few things about my town…there are more cows than people, more charro horsemen than horses, more priests than cows, and the people like to believe in the existence of ghosts, miracles, spaceships, saints and so forth.

Here, Villalobos is waving toward Joyce, who in A Portrait of the Artist as Young Man wrote that the Irish are “a priest-ridden race.” (The image of a cow also graces the first page of Joyce’s book.) Moreover, like the Irish master who left his country to live abroad — and repurposed the culture of antiquity for his own ends — Villalobos left Mexico for Brazil. He, too, is nothing if not critical of his native country’s religious and sociopolitical makeup. Indeed, “Professional Insulters” is the name of Quesadillas’ first chapter.

The title of the book denotes the family’s day-in, day-out dinnertime mainstay, whose quality varies in accordance with the direction of the politico-economic winds. At times of crisis, food rationing is implemented; thus, “normal quesadillas” become “devaluation quesadillas” or worse “poor man’s quesadillas,” in which the ingredients, like melted cheese, become fugitive ideals. It’s during the aftermath of one such crisis, following the suppression of a group of synarchists who brought commerce in the town to a standstill, that the family is outflanked by tragedy.

While wending their way through a state-owned store (the Institute for Social Security), the youngest members of the family, Castor and Pollux, go missing among the jam-packed crowd engaged in hyper-competitive grocery shopping. Complicating the subsequent search for them is the fact that it’s hard for the family to convey to strangers how the brothers can be the same age yet not look the same. Orestes calls them the “pretend twins,” while his mother calls them “biovular” and “dizygotic” twins. Presumably, the more straightforward term “fraternal twins” is never mentioned because Villalobos wants to honor the strangeness of some versions of the Castor and Pollux myth.

Remember the tale of Leda and the swan? Zeus incarnates himself into said fowl and has sex with Leda, who is married to Tyndareus. Then Leda gives birth to Castor and Pollux, who, because of their dissimilar paternity, are twins that look nothing alike. If you recall that, then you’ll likely take Orestes’s bad behavior in stride. In mythology, Orestes plots against his mother.

One gets a fair read of the book’s dark comedy by witnessing Orestes’s mishandling of his mother’s grief. (Here again come parallels with Joyce.)

We scoured every corner of the shop, combed the surrounding streets and didn’t find the pretend twins. The only thing the search achieved was to prove to me that we were poor, really poor, because in the shop there were a shitload of things we’d never bought.

‘Mamá, are we ever going to stop being poor?’ I asked, looking up at her as the tears dripped from her chin and landed in my hair. I made use of them to give my hair a brush, smoothing down a few stray tuffs.

When Orestes’s siblings accuse him of failing to watch out for the twins, he defuses their accusation with his potent declaration that “No one goes missing unless they want to.” Of course, the irony of these words turns on the idea that the poor choose their own fate.

Eventually, as resignation sinks in on the family, Orestes, in typical anticlerical mode, disparages “resignation,” which he feels the priests “had been trying to instill in us since the beginning of time.”

The next big event to hit the family comes when a prosperous Polish family builds a house close to theirs. By dint of proximity more than affinity, Orestes grows acquainted with the couple’s only son, who invites him over in the afternoons to play Atari. Holding to the prerogatives of his superior socioeconomic standing, the boy refrains from visiting Orestes’s house. The class anxiety occasioned by this arrangement causes Orestes’s mother to fret incessantly. Above all, she worries that her son will shame the family through one juvenile misdeed or another. Since this story is framed by tropes from Greek tragedy, her fears are eminently justified.

Taking advantage of his knowledge of the place’s layout, Orestes and his elder brother, Aristotle, sneak into their neighbors’ home and pilfer a stash of food to fuel their own search for the twins. While Aristotle believes that they were lured by aliens to a specific hilltop (Mesa Redonda) more than 4,000 meters from the store where they were last seen, Orestes doubts the cogency of his brother’s hypothesis. He just tags along to get the hell away from home.

Orestes’s journey is worth following. Like the dish that gives Quesadillas its name, this raucously funny novel serves as a perfect literary snack, ideal for a commute or a welcome distraction from daily frustrations.