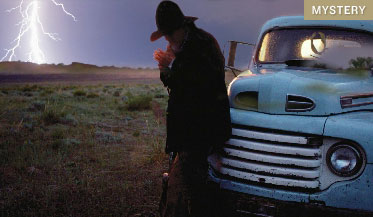 I’ve read all 17 of James Lee Burke’s Dave Robicheaux novels to date — an indulgence usually reserved for summertime. Rising temperatures and humidity fit Robicheaux’s Louisiana settings, and half explain the combination of rage and compassion that fuel Burke’s Cajun detective hero. As all Robicheaux fans know, he’s a Vietnam vet and recovering alcoholic filled with distaste for authority. He struggles against his own base impulses while fighting off oodles of bad guys mired in evildoing, corruption, and greed. His own redemption is as important to him as justice.

But can Burke convert Robicheaux fans to his latest? Rain Gods shifts locale from Bayou Teche, New Iberia, and the Caf? du Monde to the harsh and arid landscape of South Texas. In place of his customary hero, Burke resurrects a small-town sheriff named Hackberry Holland, first introduced in his 1971 novel Lay Down My Sword and Shield. Hackberry is a cousin to Billy Bob Holland, the former Texas Ranger of Burke’s Cimarron Rose and Heartwood — novels that never gained traction with diehard Robicheaux fans like me.

The change of locale and cast of characters works for Burke this time. Rain Gods begins with the massacre of nine young Thai women who had been trafficked across the border from Mexico. An anonymous call brings Sheriff Hackberry Holland to the scene, a fallen-down Spanish mission where the victims were first machine-gunned, then buried by a bulldozer. At least one was alive.

Hackberry is a Korean vet once tortured in a POW camp, recovering from an alcohol-sodden life as a politician — and the loss of his beloved wife. He’s in his 70s, older and wiser than Robicheaux, but just as haunted: “In his sleep, the tall man still heard bugles blowing in the hills, echoing as coldly as brass ringing on stone.” Like Robicheaux, Hackberry combines unpitying self-knowledge and hard-won principle — an emotional mix that gives him a fearlessness in the face of evil.

Burke flexes his descriptive powers in the opening lines: “On the burnt-out end of a July day in southwest Texas, in a crossroads community whose only economic importance had depended on its relationship to a roach paste factory the EPA had shut down twenty years ago, a young man driving a car without window glass in it stopped by an abandoned blue-and-white stucco filling station that had once sold Pure gas during the Depression and was now home to bats and clusters of tumbleweed.”

The case is as convoluted as a coiled rattlesnake. And the hunt for the anonymous caller, an eyewitness who alerted the sheriff to the massacre, uncoils slowly.

The eyewitness is Pete Flores, a tequila-drinking Iraq war vet scarred inside and out by his injuries. Pete was hired to drive a truck to Dallas for $300. When he saw his quick driving job might turn into something sinister, he skedaddled, but not before he heard gunshots and women screaming and dialed the local sheriff’s office. His girlfriend, aspiring country singer/waitress Vikki Gaddis, is by his side as he’s on the run. Everyone is looking for Pete, from Hackberry and his array of law enforcement peers to several layers of villains caught up in a kidnap plot gone awry.

The cast of baddies includes a passel of New Orleans gangsters transplanted by Katrina. Among them is Nick Dolan, who has traded his floating casino for a skin joint halfway between Austin and San Antonio. Nick supports his wife, Esther, and their three children in a carefully maintained simulacrum of respectable life. For Nick, a hypocrite who despises hypocrites, the only sin is financial failure. Working with Nick is a Rolex-wearing thug named Hugo Cistranos, hired to kidnap the Thai women before they could go to work at his competitor Artie Rooney’s escort services in Houston and Dallas. Nick owes Hugo for the job gone awry, the “personnel” costs and restitution to Rooney, who puts a price on Nick’s head.

The icing on this devil’s food cake is “Preacher,” a twisted killer who sees himself as the left hand of God, the giver of death. He’s the fatherless child of a mother who made her living servicing gandy dancers from a boxcar while he played on the other side of a blanket she hung up down the middle. His weapon of choice is a World War Two Thompson submachine gun. He’s found easy pickings as a gun for hire in the free-fire zone across the border in Mexico. His obsessions make him more unpredictable than your average thug: Preacher refuses to finish off Dolan because of the biblical implications of his wife’s name — he explains to a pair of underlings that Esther was the handmaiden of God. But when those same two henchmen decide to double-cross him, they don’t find him inclined to mercy.

“More people are being killed in Coahuila and Nuevo Leon than in Iraq,” Ethan Riser, the FBI agent on the case, tells Hackberry, as he drops in on his house early one morning to urge cooperation. Hackberry has little patience with the feds; he’s used to running his own show. “My grandfather was a Texas Ranger,” he tells Riser. “He knocked John Wesley Hardin out of his saddle and pistol whipped him and put him in jail.” Hackberry and his chief deputy, Pam Tibbs, find themselves at cross purposes not only with Riser but with a maniacal immigration agent named Clawson, a six-four specimen with a shaved and polished head and trauma in his past. On first encounter, Nick Dolan immediately recognizes Clawson as a bone breaker.

Burke has written a couple of strong female sidekicks into this picture. Pam Tibbs is a solidly built woman strong enough to slap Clawson around with a blackjack when he disses her boss. She’s good at her job, not so good at disguising her yen for Hackberry, who reminds her repeatedly that he’s her boss, and he’s too old for her.

Meanwhile, hapless Pete Flores has an ace in the hole in the form of Vikki Gaddis, a resourceful woman — and a mean shot. Early on she blows a hole in the Preacher’s foot and calf, leaving him stumping around on crutches. Or, as Preacher remembers it, “She had fried his eyes with wasp spray, taken his weapon, shot him at close quarters, crushed his cell phone with her tire, and left him to bleed out like a piece of road kill.”

The landscape of Rain Gods is harsh, the chase scenes harrowing, the denouement crackling with lightning and mad laughter, not to mention tarantulas and rattlers. Aside from a few extraneous twists and turns, Rain Gods delivers. James Lee Burke knows how to creep us out, and bring us to ground with a jolt.