Reading in the Brain 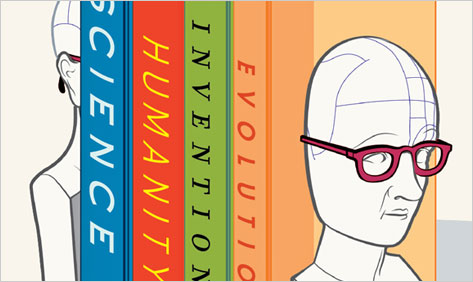 Right now, your mind is performing an astonishing feat. Photons are bouncing off these black squiggles and lines — the letters in this sentence — and colliding with a thin wall of flesh at the back of your eyeball. The photons contain just enough energy to activate sensory neurons, each of which is responsible for a particular plot of visual space on the page. The end result is that, as you stare at the letters, they become more than mere marks on a page. You’ve begun to read.

Seeing the letters, of course, is just the start of the reading process. As the neuroscientist Stanislas Dehaene reveals in his fascinating new book, Reading in the Brain, the real wonder is what happens next. Although our eyes are focused on the letters, we quickly learn to ignore them. Instead, we perceive whole words, chunks of meaning. (The irregularities of English require such flexibility. As George Bernard Shaw once pointed out, the word “fish” could also be spelled ghoti, assuming that we used the gh from “enough,” the o from “women,” and the ti from “lotion.”) In fact, once we become proficient at reading, the precise shape of the letters — not to mention the arbitrariness of the spelling — doesn’t even matter, which is why we read word, WORD, and WoRd the same way.

In this clearly written summary of the field, Dehaene is primarily interested in two separate mysteries. The first mystery is how the individual human brain learns to read. What changes take place inside our head between kindergarten and second grade, when most of us start to take literacy for granted? How do we go from sounding out syllables, carefully parsing the phonetics of each word, to becoming fluent readers? And how does this incredibly complicated act become automatic, so that evn ths sntnce cn b quikly undrstd?

Dehaene begins by introducing the reader to the “letterbox area,” a small bit of brain just behind the left ear. The crucial role of this cortical part was first revealed by Mr. C, a 19th-century neurological patient who, after a mild stroke, lost the ability to read. What made Mr. C’s case so peculiar is that his vision was perfectly fine; he could make sense of objects and faces and even numbers. However, when he opened up a book or glanced at a newspaper, the letters on the page were utterly inscrutable, a mess of inchoate lines and curves. “He [Mr.C] thinks that he has lost his mind,” his doctor dryly noted.

Subsequent studies of patients with pure alexia — they can see everything but written language — have located the specific contours of the letterbox area. Not surprisingly, it takes up a significant chunk of our visual cortex, as the invention of the alphabet seems to have usurped brain cells previously devoted to object recognition. (Dehaene refers to this process as “neuronal recycling.”) He also speculates that, while “learning to read induces massive cognitive gains,” it also comes with a hidden mental cost: because so much of our visual cortex is now devoted to literacy, we’re less able to “read” the details of natural world.

But reading isn’t just about seeing — we still have to imbue those syllabic sounds with meaning. This is why, once the letterbox area deciphers the word — this takes less than 150 milliseconds — the information is immediately sent to other brain areas, which help us interpret the semantic content. Such a complex act requires a variety of brain areas scattered across both hemispheres, all of which must work together to make sense of a sentence. If any of these particular areas are damaged, people tend to lose specific elements of language, such as the ability to conjugate verbs or decipher metaphors.

One of the most intriguing findings of this new science of reading is that the literate brain actually has two distinct pathways for reading. One pathway is direct and efficient, and accounts for the vast majority of reading comprehension — we see a group of letters, convert those letters into a word, and then directly grasp the word’s meaning. However, there’s also a second pathway, which we use whenever we encounter a rare and obscure word that isn’t in our mental dictionary. As a result, we’re forced to decipher the sound of the word before we can make a guess about its definition, which requires a second or two of conscious effort.

The second major mystery explored by Dehaene is how reading came to exist. It’s a mystery that’s only deepened by the recency of literacy: the first alphabets were invented less than 4,000 years ago, appearing near the Sinai Peninsula. (Egyptian hieroglyphic characters were used to represent a Semitic language.) This means that our brain wasn’t “designed” for reading; we haven’t had time to evolve a purpose-built set of circuits for letters and words. As Deheane eloquently notes, “Our cortex did not specifically evolve for writing. Rather, writing evolved to fit the cortex.”

Deheane goes on to provide a wealth of evidence showing this cultural evolution in action, as written language tweaked itself until it became ubiquitous. In fact, even the shape of letters — their odd graphic design — has been molded by the habits and constraints of our perceptual system. For instance, the neuroscientists Marc Changizi and Shinsuke Shimojo have demonstrated that the vast majority of characters in 115 different writing systems are composed of three distinct strokes, which likely reflect the sensory limitations of cells in the retina. (As Dehaene observes, “The world over, characters appear to have evolved an almost optimal combination that can easily be grasped by a single neuron.”) The moral is that our cultural forms reflect the biological form of the brain; the details of language are largely a biological accident.

Deheane ends the book with a discussion of education — he’s a supporter of phonics and ridicules the whole-language method, “which does not fit with the architecture of our visual brain.” It’s an interesting chapter, and it’s always nice to see scientists grapple with the practical implications of their work, but the most compelling themes of the book remain rooted in basic science. As Deheane and others have demonstrated, the brain is much more than the seat of the soul — it’s also the fleshy source of our culture. By studying the wet stuff inside our head, we can begin to understand why this sentence has this structure, and why this letter, this one right here, has its shape.

Jonah Lehrer is a contributing editor at Wired magazine. He's the author of How We Decide and Proust Was A Neuroscientist.