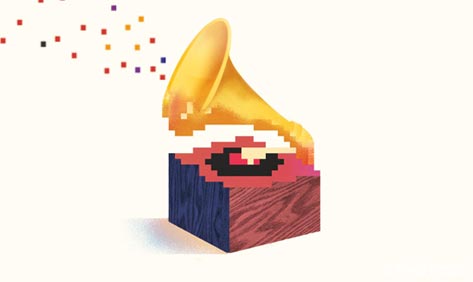 More than 300 years ago, Johann Sebastian Bach was born in the small German town of Eisenach. Unlike his contemporary Handel, he never traveled very far. But from this intense central point, Bach — or at least the sound waves representing him — seems to be filling up the universe. Three of his pieces are on Voyager’s golden disc which is now approaching the brink of interstellar space; and at the same time, as Paul Elie, the author of Reinventing Bach, says, “He is in my pocket.” How has Bach in our time become a Godlike being whose center is everywhere and whose circumference nowhere?

By juxtaposing the space capsule and the pocket, Elie captures two elements of Bach — the domestic and the transcendent. They were certainly evident in his own life of playing, rehearsing, composing, teaching, and performing music, where there was not much distance or difference between the clavier at home and the organ at church. By juxtaposing the LP and the iPod, Elie reminds us of how technology has democratized and universalized Bach — all of us can “play” him now whether we’re picking through a score at the piano or listening to recordings of Edwin Fischer’s impassioned wrong notes or Glenn Gould’s equally impassioned right ones.

I single out Fischer and Gould’s piano recordings because while both Fischer and Gould give highly individual performances, they represent two different ways of thinking about what a recording is. Fischer’s recordings sound old, not just because of the background hissings and pops but also because they are embedded in concert practice: one continuous take, one continuous flow distilling concentrated experience with that particular piece at that particular moment in that particular space, warts, felicities, and all. Gould’s recording of the same pieces sound—well, newer, certainly, but in some sense out of time and even location: Gould consciously exploited “take-twoness” — not so much to eliminate flubs (although that too) as to craft peaks of brilliance on an instrument inhabiting its own sound-world.

For Elie, whose previous book, The Life You Save May Be Your Own, concentrated on four American Catholic writers, the spiritual and the technological are not antithetical:

In an age of recordings, the past isn’t wholly past and the present isn’t wholly present, and our suspension in time, our intimacy with the most sublime expressions of people distant and dead, is a central fact of our experience. This is at once a benefit and a quandary, and in it, I would venture, are the makings of a spirituality of technology.

Some Bach pianists have the gift of bringing out lines of music in a score that I’ve never noticed before — I think particularly of Gould’s and Simone Dinnerstein’s startling different but utterly compelling versions of the Goldberg Variations. Elie has a similar ability to hear new connections between well-known notes. I find him particularly thought-provoking when he marks long historical phrases. In one passage, after considering the physical placement of the church organist (literally lofty, back turned to the service), Bach’s chorales, and the goals of the Reformation that lead “every believer [to] hope for a direct encounter with the thing itself,” Elie moves outward to our day: “Recordings heighten the effect, completing the transition from eye to ear, from seeing to hearing, that the Reformation had brought about. The organist is done away with. So is the church building. So are the limits of space and time, of stamina and attention. The music of Bach is all that is left. The recordings pour out perfection: they enable the listener to import transcendence into an ordinary room, to “play” the music without making it.” Is it just a fluke that some early recording studios were deconsecrated churches?

I have been singling out technological contemplations, but Elie has many strengths and strands: detailed and beautifully described moments of listening, engagingly narrated summaries of scholarship, alert attention to telling facts, and a loving knowledge of many different kinds of music, including Robert Johnson and Led Zeppelin. There’s plenty of audiophile information — wax cylinder, recording, mono, stereo, different kinds of tape, 78s, long-playing records, CD’s, iPods — and a lot on the placement of microphones.

Wearing his learning lightly (with wonderful endnotes as a ground), Elie is polyphonic and contrapuntal. In counterpoint, as Nicholas Slonimsky defines it, “each voice has a destiny of its own.” Elie’s book is held together by chain of voices following one other as they make an entrance, step back, overlap, and enter again to reveal a new aspect against the changing conversation: Schweitzer to Casals to Stokowski to Gould to Ma. Other voices too move in and out, filling out the progressions: Tureck, Schoenberg, Einstein, Jobs, even the musically fantastic Mickey Mouse. The voice hovering over all is Elie’s own, modest, serious, attuned to the whole.

Among the wonder of Bach’s music, according to Elie, is that “it sounds inventive — it doesn’t finish the musical thought so much as keep it aloft.” Above all it is this aspect of keeping a musical idea in play, Elie feels, that has inspired so many musicians to enter into this long conversation.

It’s a conversation that has technical or professional aspects, but that also welcomes interested amateurs like Elie and me. Here are two signs of my engagement provoked by this book: first, the number of comments I’ve made in the margins, often disagreements over the role of technology; second, the number of times I’ve turned to CDs, DVDs, iTunes, and YouTube to listen to something he mentioned. Both a benefit and a quandary indeed. The perfection of recordings can be transcendent, yes, but also inhibiting for sublunary amateurs. From a technical point of view, Gould’s Apollonian super-perfection is now an every-day occurrence thanks to the ability to drop in a single-note retouch for a flub. (I’ll leave autotune alone.) For example, I particularly like something Elie doesn’t mention perhaps because he doesn’t: the domestic intimacy of overhearing Gould hum in the background of, say, the English Suites. But I’ve been entranced by some of the YouTube videos he does mention that make the power of Bach visible, from vibrating graphic animations to a Japanese performance of the Matthew Passion to Mstislav Rostropovich playing at the Berlin Wall — in front of exuberant Western graffiti including (Elie strikingly fails to mention given his eye for recurrence) Mickey Mouse.

It is a pleasure to read such a serious and inventive book on Bach, and that’s saying something.

Alexandra Mullen left a life as an academic in Victorian literature to return to her roots as a general reader. She now writes for The Hudson Review (where she is also an Advisory Editor), The New Criterion, and The Wall Street Journal.