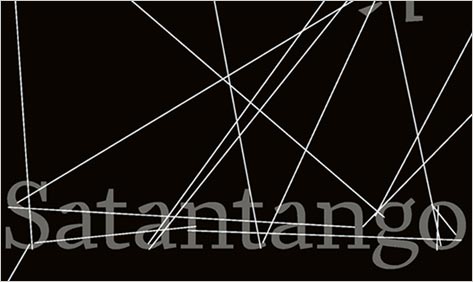 My friend Mary Ellen once approvingly likened the experience of reading a novel by W. G. Sebald to having an autumn chill trapped in the threads of one’s sweater. I recalled her aperçu while tussling with the work of the Hungarian writer László Krasznahorkai — a less delicate but no less eloquent purveyor of melancholia. (It’s no surprise that the New Directions edition of his novel Satantango carries a quotation from Sebald.) If  one cared to gauge the book’s median climate, near the end there is a part in which Irimiás — a charlatan around whom many of the characters pitch their hopes — illuminates the seasonal affective disorder clouding his environment:

They met not a single soul until they got to the church square, Petrina even remarking on it: “What is this? A curfew?” “No, it’s just autumn, the time of year,” Irimiás noted sadly: “People sit by their stoves and don’t get up till spring. They spend hours by the window until it grows dark. They eat, they drink, they cling to each other in bed under the eiderdown. There are moments when they feel everything is going wrong for them, so they give their kids a good beating or kick the cat, and in this way they get by a while longer.

First published in 1985, Satantango is Krasznahorkai’s debut novel. It focuses on a small, hapless group — adulterers, schemers, and prostitutes, plus the odd misanthrope, neglected child, and evangelical — eking out a living on a dilapidated agricultural estate. The story was adapted into a bleak, beautifully draining seven-hour film directed by fellow Hungarian Béla Tarr, who collaborated with Krasznahorkai on four additional movies: Werckmeister Harmonies (2000), which is adapted from the author’s second novel, The Melancholy of Resistance (1989); Damnation (1988); The Man from London (2007); and The Turin Horse (2011). Spending time with Satantango, in either its literary or cinematic incarnation, is akin to taking an aesthetic pilgrimage to a cheerless hamlet in eastern European flyover country. An unnamed spot that is a staging ground for inclement weather, bitterness, frustration, and manipulation. Everyone in the book seems put upon, and one imagines their socks need darning.

The first half of Satantango is consecrated to waiting. The story opens with the workers waiting for a couple of their number to return to the collective farm with the wages for their harvest. While in a town, Irimiás and his sidekick, Petrina, wait for an audience with the officials overseeing the local informant department, who have summoned them. After they are dismissed — but not before they have been compromised — the pair make their way to a bar, where they are spotted by a man who carries word of their imminent arrival to the people of the estate. The news stokes an air of festive anticipation, not only because the two had been presumed dead but also because Irimiás is much esteemed. As Futaki — arguably the most likable person in the book — recollects: “[I]t was to him everyone ran in case of trouble, the managers too, because, as Petrina said at the time, Irimiás was ‘an angel of hope to hopeless people with hopeless difficulties.'”

There is little cause for celebration when Irimiás and Petrina arrive, however, on account of a suicide that jars the tiny community. Playing off of their emotions, Irimiás convinces most of the workers to leave their old lives behind them and follow him to establish a utopian community. As you have no doubt inferred, halcyon days are not on the horizon.

So what to make off this archly crafted ode to human fallibility that asks its audience to forgo accoutrements like indented paragraphs, short sentences, or, as in the case of Tarr’s film, snappy transitions between scenes? As is typical with other forms of avant-garde art, such negations are offered in the service of an alternative venture to the kind of mass market entertainment that relies on a series of ingratiating emotional checkpoints that privilege clarity over ambiguity. Considered ethically, the function of an art that requires its audience to continuously step up — and that provides no banisters — is to dignify that effort with a memorable reward. Think of Satantango, then, as an eastern European blues album that looks to affirm the coarse texture of life rather than auto-tune it into something smoother or more amendable to wish fulfillment.

Needless to say, one’s mind-set going in is everything. Speaking personally, I didn’t realize how mentally out of step I was with Krasznahorkai’s book for some time. For on a stylistic level, I wasn’t fazed by the author’s stratagems. I was familiar with blocks of text à la Thomas Bernhard, and long sentences don’t make me fidget. (If the same is not true for you, Mathias Énard’s Zone— the current record holder for the longest sentence in literature — may cure you.) Occasionally, however, Krasznahorkai’s taste for pyrotechnics gets the best of him:

And as the wood creaked, the wind outside, like a helpless hand searching through a dusty book for some vanished main clause, kept asking the same question time and again, hoping to give a “cheap imitation of a proper answer” to the banks of solid mud, to establish some common dynamic between tree, air and earth, and to seek through invisible cracks in the door and walls the first and original sound, of Halics belching.

But such frills are counterweighed by an abundance of bravura writing, like this passage wherein Irimiás and Petrina are brought before a captain who is responsible for managing the network of citizen informants:

The captain is rubbing his brow and his face…it is as if he were covered in armor; gray, dull, yet metallic; he seems to be swallowing light, some secret power is entering his skin; the decay resurrected from the cavity of the bones, liberated, is filling every cell of his body as if it were blood spreading to the extremities thereby announcing its unquenchable power. In that briefest of moments the rosy slow of health vanishes, the muscles tighten and once more the body begins to reflect light rather than absorb it, glittering and silvery, and the finely arched nose, the delicately chiseled cheekbones and the microscopically thin wrinkles are replaced by a new nose, new bones, new wrinkles that wipe away all memory of what had preceded them to preserve in a single mass everything which, years from now, will find itself interned six feet under.

At the risk of downplaying such excellent prose, it wasn’t until I decided to skip the book’s last thirty pages and restart it that I realized the extent to which its Eeyor-ish disposition had initially thrown me off. In retrospect, I suppose this was because I was still coasting on the promise of a New Year (and the last novel I’d read was about the vicissitudes of contemporary hopes and dreams in America). By way of contrast, there is a line from one of Irimiás’s reports to his handler that distills Satantango‘s pessimistic comedy: “Should anyone contemplating the advisability of leaping off a high bridge be in any doubt or prone to any hesitation, I advise him to consider the headmaster: once he has considered this ridiculous figure he will immediately know that there is simply no alternative but to jump!”

On my second go around, the dense textual columns of Krasznahorkai’s novel lost none of their strategic claustrophobia, but it was easier for me to get into the mind-set of its characters, who take life for the rough beast it is and try to throttle it a little, each in his or her own way. To its credit, Satantango is not in its original or its cinematic form a masterpiece suited to be read or screened any ol’ day. It’s an experience worth rearranging your schedule around.