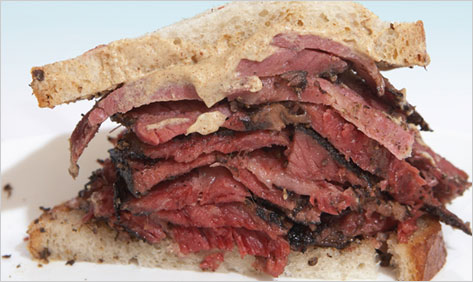 He may have written a book about Jewish food, but David Sax is quite a ham. He refers to a deli’s finances as “pastraminomics,” describes a knish as being “baked to a George Hamiltonesque hue,” and titles a chapter on Las Vegas’s deli scene “Luck Be a Brisket Tonight.”

But in addition to Catskills shtick, journalist Sax brings passion and substance to Save the Deli, his paean to the Jewish delicatessen experience. The heart of the book is his cross-country road trip, during which he sizes up the state of the deli in cities obvious (New York, Los Angeles, Miami) and unlikely (Boulder, Salt Lake City, Houston).

Besides providing vivid descriptions of the food he eats along the way, the author delves into the cultural history of the cuisine, which originated in pushcarts operated by Eastern European immigrants during the late 19th century on Manhattan’s Lower East Side. Although delis are dying off, particularly in New York, Sax is heartened to find a thriving deli or two wherever he goes. (Not to mention people willing to talk about them: “Where the heck did you get the meshugah idea for a deli book?” Mel Brooks demands at the start of their interview.) A Jewish deli man in urban Detroit tells Sax of his food’s popularity with African Americans. A Berkeley deli operates according to locavore principles, procuring its meat from the famed Niman Ranch. Buoyed by the recent reopening of New York’s venerable 2nd Ave. Deli, Sax concludes on an optimistic note, professing faith that “a new breed of deli” will “bring the Jewish delicatessen into the twenty-first century, while staying faithful to the flavors of the nineteenth.”