Seeds of Ice and Fire 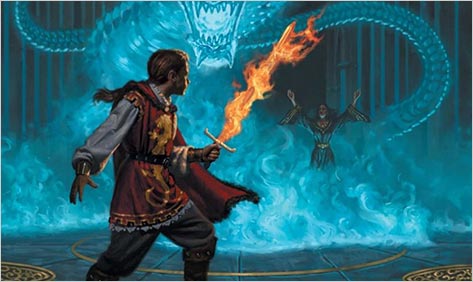 Consensus wisdom has it that all modern commercial fantasy novels fall into two camps: those derived from J.R.R. Tolkien and those derived from Mervyn Peake. The Lord of the Rings template or the Gormenghast mold. The former type is characterized by much magic, questing, battles of good versus evil, Joseph Campbellian heroes, conclusive triumphalism, and a quasi-medievalism. Such novels always travel in herds of three books or more. The second category features strange, mind-bending venues, odd, idiosyncratic characters, problematical morality, enigmatical actions, open-endedness, interstitial hybridization, and a more elaborate and elegant prose style. Such books — nowadays sometimes subsumed under the banner of “New Weird” — are generally standalone novels.

But however valid this taxonomy, it ignores a third type of fantasy, a kind best exemplified today by George R. R. Martin‘s Game of Thrones books — or as the series is more properly titled, A Song of Ice and Fire. The first volume of the five extant — A Game of Thrones — appeared in 1996, and the series will conclude, some unknown day, with two volumes as yet unfinished, The Winds of Winter and A Dream of Spring. Naturally, in this mediaphilic culture of ours, the HBO series version of the novels has become the more well known and widely adored manifestation of Martin’s brainchild.

And how does Martin’s story differ in kind from the first two camps of fantasy outlined above? The focus of this third type of fantasy novel is on Realpolitik, the Machiavellian maneuverings of power-hungry people and nations. The supernatural is downplayed to some extent. Shifting allegiances between factions and families are paramount. There are no great quests or Armageddons. The characters exhibit the dicey morality of those in the Peake books but also the operatic ambitions and emotions of the Tolkien school. The more down-and-dirty aspects of the human condition are not scanted. Such novels tend to approach mainstream historical fiction.

Martin did not, of course, invent this mode, as he would be the first to admit. There were predecessors, however inchoate. And Martin’s success has inspired a new generation of such novels.

If we mercilessly bypass all works connected with King Arthur and his court — a saga not totally irrelevant to Martin’s — and also the medieval fantasies of William Morris, then perhaps the first book of this stripe is The Worm Ouroboros by E. R. Eddison, an amateur writer and British civil servant. Published in 1922 and of course predating both Tolkien and Peake, Eddison’s anomalous novel — followed by three loosely linked sequels, the Zimiamvia Trilogy — chronicles in ornate and lapidary language the mighty battles between the noble warriors of Demonland and the lowly slinking sorcerers of Witchland. So rousing are the battles that the victors opt at the climax for a magical rerun of the entire struggle.

Much admired by Tolkien, C. S. Lewis, and James Branch Cabell, The Worm Ouroboros met an enthusiastic new audience when given a paperback edition by Ballantine Books in 1967. Part of the development of the fantasy genre as a marketing category, Eddison’s book was soon followed by Ballantine’s legendary and seminal Adult Fantasy series, which reprinted many classics. But series editor Lin Carter also discovered newcomers, such as Katherine Kurtz with Deryni Rising, which in 1970 launched what has since become a cluster of five trilogies and more. In a secondary world modeled on Britain in the twelfth century, a king’s death triggers internecine struggles and the revival of old magics. The immediate sequels bring ecclesiastical factions into play.

Outside the fantasy genre and a bit earlier, in 1961, subsequently famed historical novelist Dorothy Dunnett began her career with the resonantly titled novel The Game of Kings. Following the picaresque exploits of Francis Crawford of Lymond in mid-sixteenth-century Europe and eventually expanding into a six-book series dubbed the Lymond Chronicles, the tale is replete with intrigue and derring-do.

Meanwhile, one of the shining stars of science fiction during the New Wave period of the 1960s was Roger Zelazny. Fans of his work eagerly followed him into the land of Amber in 1970, with the arrival of Nine Princes in Amber. Something of a science-fantasy mashup, the book capitalized on the romantic conceit of the multiverse, a trope that was brilliantly exfoliated around the same time by Michael Moorcock, whose own fantasies of the period are not unrelated to Martin’s. In Zelazny’s novel, the seed of a long series, one murderous family of continuum-jumping adepts wars among themselves in order to establish dominance across the dimensions.

Thoroughly steeped in all this genre history, Martin leaped into print himself in 1971, with the Galaxy magazine story “The Hero.” The next twenty-five years leading up to A Game of Thrones would find Martin winning awards for his science fiction and also establishing himself in television by working on such shows as Beauty and the Beast. Of course, his fame now rests almost exclusively on his late-career fantasy work.

The fervent readerly interest in Martin’s type of “dynasty fantasy,” as the Encyclopedia of Science Fiction dubs the mode, has certainly encouraged some of his contemporary peers to work in a similar vein. Also, outside the fantasy genre, a handful of writers continue to follow Dunnett’s lead.

Famed for his posthuman SF, Charles Stross exhibits another arrow in his quiver with the Merchant Princes series, launched with The Family Trade in 2004. A deliberate homage to Zelazny’s Amber, Stross’s saga tells of the Clan, whose genetic heritage is the ability to jump across parallel timelines. That the Clan uses this talent for drug smuggling, among other pursuits, is Stross’s wry updating of Zelazny.

Back in the realm of non-fantastical historical novels, Bernard Cornwell is busy charting The Saxon Tales, seven books to date with an eighth, The Empty Throne, due out in the UK in October of this year. Launched with The Last Kingdom in 2004, this retelling of the struggles of Alfred the Great features many of the same frissons as Martin’s books.

Steven Erikson has acquired a dedicated following for his series of books grouped under the rubric The Malazan Book of the Fallen, ten volumes commencing with 1999’s Gardens of the Moon and full of multiplex warfare. So partisan are his fans, in fact, that Erikson has felt compelled to go on record as downplaying the “competition” between his books and Martin’s. An interview hosted at Wired magazine’s site found Erikson saying, “I remember talking to George a few times now. Both of us are kind of baffled at the vehemence between our fan bases.”

Daniel Abraham’s The Long Price Quartet, whose first installment is A Shadow in Summer from 2006, adds some man-in-the-street perspectives and some intriguing poetry-based magic to his “dynasty fantasy” account of the wars, covert and overt, between the city-states of the Khaiem and the expansionist empire of the Galts. Appropriately enough, Abraham also scripted the graphic novel adaptation of Martin’s series.

Few fantasy authors of recent vintage have achieved prominence and acclaim faster than Joe Abercrombie. His debut novel from 2006, The Blade Itself, heralded the start of his universe known as The First Law. In line with Martin’s own predilection for raw and gritty moments such as the infamous “Red Wedding” incident, Abercrombie’s novels have been both chastised and lauded for their “grimdark” atmosphere, a charge the author has seen fit to address in an impassioned essay at his blog. Martin himself praises Abercrombie’s work as “a kind of splatterpunk sword ‘n’ sorcery.”

Finally we come to a work that is at once both a formative influence on Martin’s books and a beneficiary of their success: The Accursed Kings cycle, centering around the deadly machinations among the French monarchs in the thirteenth and fourteenth centuries. The French author Maurice Druon began his series of seven non-magical historical novels in 1955 with The Iron King. Little known to an English-speaking audience, they nonetheless reached a certain impressionable young author named Martin, who has since gone on to champion the books as containing “all the good stuff that’s in my books, minus the fantasy…”  Martin’s introduction to the new editions of Druon’s books complete the circle of influence. As Martin proclaims, and as he and his affiliates continue to prove, “Historical fiction and fantasy [are] sisters under the skin, two genres separated at birth.”