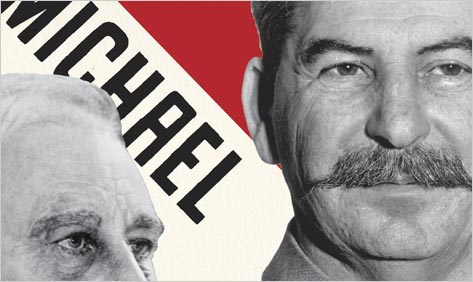 On April 25, 1945, First Lieutenant Albert Kotzebue led an American platoon east of the Mulde River in central Germany. The countryside was in the full bloom of spring, creating a stark contrast with the misery of the refugees they met — old men, women, and children hauling the remnants of their lives. The Americans also encountered German soldiers desperate to surrender to anyone but the Soviets, as well as Allied POWs still dazed after their release from captivity. When they reached the edge of their patrol zone, Lt. Kotzebue and his men pushed on, betting they could be the first Americans to encounter Russian soldiers. With the American and British forces closing in from the West and the Red Army advancing from the East, it was just a matter of time before they met. In the village of Leckwicz, Lt. Kotzebue got his wish, exchanging terse greetings with a Red Army cavalryman conducting a scouting mission on horseback.

Lt. Kotzebue described the Russian as “reserved, aloof, suspicious, not enthusiastic.” Those same words could be used to describe the Allies in their dealings with one another as World War II came to a close. In his new book, Six Months in 1945: FDR, Stalin, Churchill, and Truman — From World War to Cold War, Michael Dobbs takes as his subject the final stretch of the war. “Few historical turning points are as rich in drama as the six months between February and August 1945, a period bookended by the Big Three conference in Yalta and the bombing of Hiroshima,” he writes. Wading into the contentious debate over when the Cold War started, Dobbs argues that the Allies became adversaries during the final six months of World War II. For Dobbs, there is no point after the war when it could have worked out differently. The course was set.

Dobbs deploys a technique in Six Months in 1945 that he used in One Minute to Midnight: Kennedy, Khrushchev, and Castro on the Brink of Nuclear War. The narrative emerges from historical snapshots that capture both big dramatic events and more intimate moments. It puts historical actors and their quirks front and center, making for a novelistic read. Dobbs says in his introduction that he’s writing “the story of the people — presidents and commissars, generals and foot soldiers, victors and vanquished.” We meet the familiar cast of World War II — Stalin, Molotov, Zhukov, Churchill, Eden, Bevin, Roosevelt, Truman, Brynes, Stimson — along with lesser-known figures like Lt. Kotzebue and Edwin Pauley, an American member of the Allied Reparations Commission. Pauley found himself on the wrong end of a Russian rifle when he got caught filming the Soviet looting operation in Berlin. Dobbs is at his best as a storyteller when he steps away from well-known personalities — and avoids a maddening tendency to rely on block quotes.

He begins the book by throwing the reader into the Yalta Conference, observing its deliberations through the eyes of Roosevelt, Churchill, and Stalin. Gossipy details abound, giving the reader a feel for what it was like to be at the high-stakes house party: the bedbugs, the flowing vodka, the twenty-course dinners, the temper tantrums, and the lack of proper bathroom facilities that had generals and admirals urinating in the garden behind a statue of Lenin. To streamline his narrative, Dobbs focuses on the discussion about the reconstitution of Poland at the expense of other issues, such as the genesis of the United Nations, denazification, and Soviet entry into the war with Japan.

The middle part of the book chronicles the final weeks of the war in Europe, as Nazi Germany surrendered and the Allies’ alliance became increasingly strained. Dobbs offers a compassionate account of Roosevelt’s final days and relays Truman’s sense of being in over his head. He shows the ruthlessness of Stalin in establishing a pro-Soviet regime in Poland. Pity the poor Polish politicians who thought they had an opportunity to launch a democratic government, only to find themselves thrown into Moscow’s notorious Lubyanka prison, subjected to show trials and more prison time.

The final section opens with the Potsdam Conference, where Stalin, Truman, and Churchill argued over the fate of Germany, the extent of reparations, and how to feed a devastated Europe — along with who could provide the best musical entertainment at the evening soirées. After accompanying Churchill on a tour of devastated Berlin, watching him poke through the rubble of the Reich Chancellery, Dobbs follows him back to London, where the prime minister receives the crushing news that his services are no longer required. The war with Japan finally makes an appearance in the form of discussions about a Soviet invasion and the bombing of Hiroshima and Nagasaki.

Dobbs nicely renders the pile-up of events that marked the final months of the war and reminds the reader of the fallible human beings who later became frozen in memory as stock World War II figures. But he stumbles when it comes to policymaking. The focus on grand milestones and personal eccentricities frequently comes at the expense of the issues under debate, issues that affected the lives of millions of people.

In opening chapters about Yalta, Dobbs pays more attention to Roosevelt’s poor health than the reasons for the conference being called in the first place. There’s little indication that the policies advocated by Churchill and Roosevelt, and later Truman, were sources of debate within their own governments. (Of course, one did not disagree with Stalin.) The dropping of the atomic bomb was and remains a hugely controversial issue, with Yalta and Potsdam not far behind, but those debates don’t inform the narrative in a meaningful way. Historical actors making decisions are most compelling when they’re seen in the context of actual outcomes — after all, that’s what makes history dramatic.

One  odd, and somewhat unnecessary choice: Dobbs pins part of his argument around Alexis de Tocqueville’s assertion that the United States and Russia were destined to dominate the world stage and fulfill “the will of Heaven.” There are plenty of big ideas driving World War II — capitalism, communism, fascism, totalitarianism — without having to invoke a long-deceased Frenchman as a framing device.

That said, Dobbs delivers a propulsive read, replete with the sort of telling details that bring his subjects into high resolution. There are stretches of Six Months in 1945 that read like a taut World War II thriller, and the reader walks away convinced that the final days of the war were among the most formative of the twentieth century. But if you like your character studies leavened by a nuanced consideration of policy and consequences, you might find yourself as frustrated as a Yalta attendee looking for the W.C.