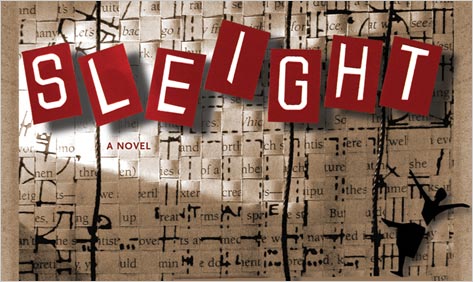 In her novel Sleight, Kirsten Kaschock has set herself a near-impossible challenge: the creation of a new, multidisciplinary art form that she can only communicate in words. Set in an almost-alternate reality where people have names like Kitchen and Marvel and “sleight” is a prestigious cultural institution with its own rich history, the novel centers on two sisters, Lark and Clef, who have spent their lives training as sleightists. Although temperamentally at odds, they’re inextricably bound together by their art. In their divergent approaches to sleight — Lark is tortured and delicate where Clef is steadfast and cold — they become twinned allegories of artistic creation.

But what is sleight?  The task of answering this question — poised from the work’s very beginning — proves difficult. Sleight is a universe unto itself, with a prescribed set of practices and movements: sleightists are like dancers, only they move with structures called architectures that are themselves interpretations of drawings. A string of Dada-like spoken words called a “precursor” governs their movement. (It’s as elaborate as it sounds.) An omniscient narrator with a scholarly air unfolds the form’s history and aesthetics in footnotes:

Perhaps it’s a failure of my imagination as a reader, rather than Kaschock’s as an author, but the nature of sleight never coalesces into a visualizable art. As often as she explains what it is, she never shows what it looks like. Even the climactic performance, which upends the sleight community and nearly destroys its performers in the process, loses its force by virtue of its abstraction. The closest we get to an explanation of “wicking,” the apotheosis of sleight — apparently a kind obliterating dissolution of the body into the work — is that “a performer is snuffed out.” To Lark, at six, “it was ice. An incapacity to hold warmth in the marrow, below the level of bone.”

Kaschock has built an allegory about the toll art extracts from its creators around an art that proves fundamentally unknowable. This is not to say that a new art form can’t be invented in prose (had she written a novel about, say, ballet, her book might have gotten dangerously stuck in Black Swan territory) but that Sleight loses the precision of its otherwise entrancing language when trying to convert an imaginary practice into images. Kaschock is a sensitive writer, with an uncanny empathy for her characters — particularly when dealing with the limits of the body. “Lark was bruised. It was her state, bruising, blood welling up only to be blocked by membrane. Lark would have liked to let herself: dress in leeches, sate them, have them fall from her deceased,” writes Kaschock in only one of her haunting metaphors.

Cut away from sleight itself, the novel is a moving portrait of mental illness, of sibling love and rivalry, and above all, of the destructive power of great art over its performers. It’s a shame that we can’t see what Lark and Clef create; we can only make out their scars.