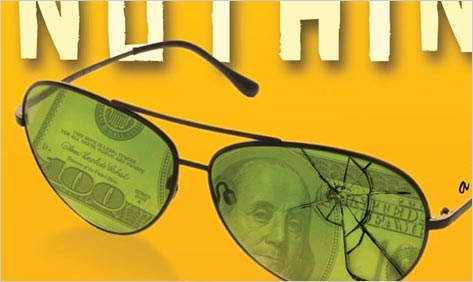 In the suburban Bay Area setting of David Anthony’s first novel, anxieties about oil and gas prices are headline news, middle-class business owners can’t catch a break, middle school girls are already in drug counseling, nobody trusts politicians, and entertainment culture pervades everyday life. That the novel is set in the summer of 1974 tells us something about our own contemporary American moment, in which all of the above conditions persist: time passes, but so much remains the same.

Those then-and-now parallels are subtle in Something for Nothing, a deft comedy with tinges of melancholy and some well-paced suspense. Anthony is generous with period details: there are long lines at the gas pumps, where odd-even rationing is in force; the San Francisco Chronicle teems with reports of Patty Hearst and the potential fate of a post-Watergate, pre-resignation Richard Nixon; Gaylord Perry is throwing spitters for Cleveland against the hometown-hero Athletics; Westworld is playing in movie theaters and The Mary Tyler Moore Show is on TV. In the foreground of this big picture is an intimate story about an out-of-luck striver named Martin Anderson, who proves willing to take life-threatening chances to keep his business and family afloat.

Martin is an American dreamer in his mid-forties who recently moved his wife and two kids out of Oakland to the posh suburb of Walnut Station. But upward mobility has its discontents, including isolation, boredom, and a forty-five-minute commute to Martin’s little office at the Hayward airport on the eastern shore of the San Francisco Bay, where he’s watching his used-aircraft dealership take a nose dive. No one’s buying hobby planes in the middle of an Arab oil embargo, and Martin is in debt up to his toupee. (He has three toupees, in fact: “shaggy, wavy, and clean-cut.” ) All the hard-won trophies of the life he’s built—a fully loaded deep-sea fishing boat, a cabin in Tahoe, and, closest to his heart, a promising racehorse named Temperature’s Rising — might soon be repossessed.

Enter a glimpse of hope, when Martin’s competent but shifty horse trainer, Val Desmond, makes him an irresistible offer. Val’s involved in a heroin-running operation from Mexico to the Bay Area, but increased border security has made driving too risky. He’ll pay Martin five grand per run to fly a light plane full of cash down to Ensenada, pick up the drugs, and deliver them back to Val’s ranch in Pleasanton.

Of course there is plenty of turbulence in Martin’s desperate bid for solvency. Drug lords, it turns out, are rather scary chaps. The heroin shipments are unreliable. Nighttime Ensenada is a phantasmagoria of risky distractions. And back home, Martin’s wife, Linda, has her suspicions. Not to mention the sudden appearance of a cheerful young narcotics detective who just happens to be the drug counselor who scared Martin’s 13-year-old daughter straight when she was busted for marijuana possession a few months ago.

That Martin’s fate is always teetering between skin-of-his-teeth triumph and near-certain failure is the source of this book’s abundant comedy but also its more poignant undercurrents. Like the protagonists of Seth Greenland’s Shining City or Eric Puchner’s more sinister Model Home, Martin is a shlubby Californian transfixed by fantasies of winning and hounded by fears of losing. It’s no accident that some of the novel’s best scenes take place at the racetrack, where “you’d get to step inside a little pocket of time in which, for a minute or two, you were part of something that had come together in just the way you hoped it would.” And where a desperate man can put “just a little bit of time and distance between you and the thing that was chasing you.”﻿