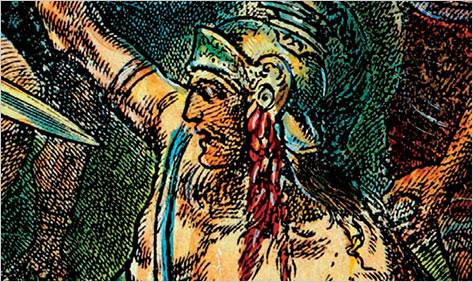 The reputation of Spartacus, like so much of what we know about the leading figures of the ancient world, can be compared to an upside-down pyramid: a huge structure of legend and speculation sustained by a tiny foundation of text. There is no doubt that Spartacus really existed or that, in the years 73–71 B.C., he led a major slave rebellion in southern Italy. But everything we know about him and his military campaigns, which for a moment threatened to bring down the Roman Republic, comes from two historians, Plutarch and Appian, who lived some 200 years after Spartacus; taken together, both devote no more than ten pages to him. Earlier historians, such as Sallust and Livy, also wrote about Spartacus, but only scraps of the relevant works survive; and there are some scattered references in other historians, including Julius Caesar.

Yet on this slender basis, Spartacus became a powerful symbol — the slave who stood up to an empire, the liberator who turned a rabble into an army. In 1918, when Karl Liebknecht and Rosa Luxemburg founded a new revolutionary Communist party in Germany, they called it the Sparticist League. For Americans today, probably the most enduring image of Spartacus comes from the 1960 movie in which the slave leader was played by Kirk Douglas; not coincidentally, that movie was based on a novel by the steadfastly Communist writer Howard Fast. Indeed, it’s possible that the modern world, with its dreams of equality and liberation of oppressed groups, has made more of Spartacus than any earlier period.

In his new biography, Spartacus, the Italian historian Aldo Schiavone attempts to drill down through the sedimented legends to the bedrock of historical fact. Because there are no sources except literary ones, this means that his short book often takes the form of hermeneutics — closely parsing the exact language of the historians to deduce what really happened, or, just as important, what those historians wanted to conceal. For the central premise of Schiavone’s book is that Spartacus represented a dangerous challenge to Roman values and power, which the official Roman sources could not fully acknowledge. To understand who Spartacus was and what he wanted, Schiavone argues, it’s necessary to read against the grain of the text, and to place him as far as possible in a broad historical context.

It is not possible, Schiavone writes, to enter into Spartacus’ mind, the way a biographer might do with a modern subject. His world was just too different from ours, and there is too little surviving material: “Nothing of what he had in mind is known to us directly. His psychology and mental landscape are completely inaccessible; a fascinating theme, but entirely obscure. Our protagonist’s intentions can only be deduced from the bare sequence of his actions.”

What we do know with some degree of confidence, on the other hand, is the kind of society Spartacus lived in. Rome in the first century B.C. was, Schiavone shows, in the throes of transforming itself from an agrarian city-state to a world-spanning empire. Perhaps the most important element in this change — certainly the most important for understanding Spartacus — was the huge increase in the slave population of Italy. At this time, most slaves were prisoners taken in war, and the Romans had just conquered huge swaths of the eastern Mediterranean, flooding the market with new supply.

At the same time, the demand for slaves was on the rise, as Rome’s small landowners — once the backbone of the Republic — were giving way to huge agricultural estates, owned by landlords and worked by slave labor. “The relationship between slavery and civilization,” Schiavone writes, “was perceived as one of necessity and sheer common sense in the imperial world.” This transformation of society had led, in the years before Spartacus’ birth around 100 B.C., to a series of violent slave rebellions in Sicily and southern Italy.

Spartacus was born in Thrace, the area that is now Bulgaria, a primitive and recently conquered area of the Roman Empire. As a young man, he seems to have served as a Roman soldier, before deserting and becoming a bandit or highwayman — though this may be a slander invented by his Roman enemies. At some point — the sources do not say how or when, but Schiavone thinks it was about 75 B.C. — he was taken prisoner and, as was standard practice, sold as a slave. Because of his strength and military training, he was taken on by a trainer of gladiators, one Lentulus Batiatus, and sent to Capua in southern Italy. “Spartacus would certainly have fought in the arena,” Schiavone writes. “He must have won, and killed.”

In the spring of 73, Spartacus began his career as a rebel leader, organizing a breakout of about 200 slaves from his gladiatorial camp. As Schiavone notes, one of the first things the former gladiators did was to exchange the weapons they had used in their shows for professional arms: this was “a full-blown rite of passage from the arena to the battleground, a purification, a scraping away of the past, which restored…dignity to men who felt they had lost it, and transformed them from slaves into real warriors.”

It was a sign of how precarious social order remained in Italy that thousands of slaves, and even some poor freemen, soon joined Spartacus’ band. The figures in ancient histories are notoriously unreliable, but Schiavone thinks that at his peak Spartacus must have commanded some 50,000 fighting men. He was a tactician of genius, managing to defeat a series of small Roman forces sent to put down the rebellion. His army crisscrossed the Italian Peninsula, from Sicily to the Po, and at one point seemed to have an open road to Rome itself.

The big question for historians has to with the kind of rebellion Spartacus thought he was leading. Was he, in fact, a kind of liberator, raising an oppressed servile class in revolution against their masters? Did he aim to abolish slavery in the Empire and set all the slaves free? Schiavone’s answer is that it is anachronistic to think of Spartacus in such terms. The Romans, he notes, had no conception of social classes in the modern sense, and their worldview could not include a society without slaves: “The idea of a society without servile labor formed no part of the ancient Mediterranean cultures.”

Indeed, Spartacus himself enslaved the Roman soldiers he captured. On one occasion he even forced his prisoners to put on a gladiatorial show, a dramatic sign of the reversal of fortunes. What he envisioned, Schiavone argued, was raising the Italian cities in civil war against Roman domination, turning himself from a mere slave leader into the chief of a legitimate army. He hoped to play on the social and political fissures in Roman society, just as other conspirators of his period had done and would do, until the rise of Augustus Caesar put the Empire on a new footing.

It was the failure of the Italian cities and their working people to take up his standard that doomed Spartacus’ rebellion. Finally, after two years, the Senate began to take the threat he posed seriously and sent a large army under Crassus to fight the rebels. In the spring of 71, Spartacus was brought to battle and defeated. The surviving accounts of his death say that he perished in the thick of battle, slaying Romans to the very end. Ironically, he would become more potent in death than he ever was in life: no longer a local warlord but a symbol of freedom who still has the power to inspire and fascinate more than 2,000 years later.

What Soldiers Do: Sex and the American GI in World War II France
By Mary Louise Roberts

American soldiers in World War II clung to the idea that in France they would be welcomed by sexually experienced and available women. It sounds like a lighthearted enough fantasy, but in What Soldiers Do: Sex and the American GI in World War II France (Chicago), Mary Louise Roberts shows that the American military deliberately encouraged the idea of France as a sexual playground, with disastrous consequences —  including widespread rape, prostitution, and venereal disease.

The Gateway Arch: A Biography

Yale University Press’s Icons of America series continues with The Gateway Arch: A Biography, in which Tracy Campbell investigates the planning, building, and cultural meanings of the Eero Saarinen–designed St. Louis landmark.

Gerald Ford will forever be known as the accidental president — the only man to hold the office who never won a national election. But in the new biography Gerald R. Ford: An Honorable Life (Michigan), former Ford adviser James Cannon makes the case that the nation remains in debt to the thirty-eighth president.