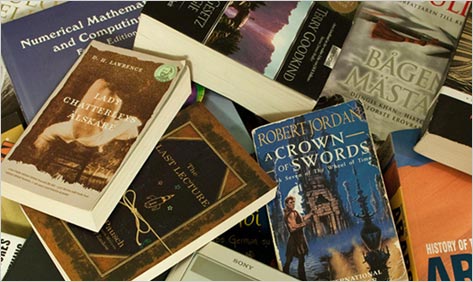 The other day, as the weather warmed and my thoughts turned to spring cleaning, I took a deep sigh and braced myself to weed my bookshelves for another year. I like that word, weeding, to describe the culling of books no longer wanted from a personal library. It reminds me that books, like an errant patch of clover or a winding strand of jasmine, are wily things with lives all their own.

We like to think that books line our shelves because we ask them inside, but the simple truth is that they cross our thresholds whether we invite them or not. Books alight under the Christmas tree or beside a birthday cake as presents from people we love. Like a thistle hitching a ride on the household dog, books attach themselves to our palms as we walk through bookshops or rummage sales. If one reviews books, as I do, then new volumes routinely arrive at the doorstep, courtesy of eager publicists and the U.S. mail.

Then comes a morning, usually in late March or early April, when the strengthening sun streams through my windows, throwing a clear light on the tangle of volumes that amble like ivy across coffee tables, nightstands, and countertops. I take a deep breath, stiffen my back, and prepare to weed.

The first candidates for the giveaway pile are usually books that aren’t books, exactly, but daily journalism slipped between covers. I deeply admire the reporting involved in books like Bob Woodward’s Plan of Attack, but I couldn’t see myself rereading his chatty exposé of the Bush-Cheney White House in the lead-up to the Iraq War. The Second Plane, some Martin Amis essays inspired mostly by 9/11, went by the wayside, too.

Some of the choices are relatively painless;  it’s almost a relief to discover that part of the bibliophilic undergrowth I’m cutting through is the result of duplicate copies.  My wife and I had some books in common when we tied the knot and merged our libraries, and in narrowing two sets of Jane Austen’s novels to one, we’re voting with confidence on the future of our marriage.

More difficult has been letting go of the ideal of the complete set — the notion that because I like some works of a treasured author, I am under some moral obligation to his entire oeuvre. I love the novelist Clyde Edgerton’s Walking Across Egypt, for example, but I’m not so crazy about some of his other efforts at fiction, such as Red Eye and Killer Diller. I’m enthralled by the memoirs and novels of the late Reynolds Price, but I’m less enamored with his poems. And so, with the heartless resolve required to break up any family, I kept a few books from these writers on the shelf but gave others the heave-ho.

Some books land in the discard pile because, like the slacks in my closet from seasons past, they simply no longer fit me. With my children now older, I don’t need a copy of Caring for Your School-Age Child: Ages 5 to 12. Giving up on a crackpot scheme to plant a backyard orchard also enabled me to toss any number of books on fruits and berries. I had trouble remembering, as I threw a foreign-language dictionary on the weeding pile, how I had ever hit upon the idea that I could teach myself Japanese.

Through such basic rules of reduction, I managed this year to box some sixty-three titles for donation to the public library down the street. I would have winnowed even more volumes if I’d stuck to my process of elimination, but one of the small conceits of book weeding is making exceptions to your own rules. I still keep a good bit of journalism on the shelf on the hunch that the best of it, like the magazine pieces of E. B. White or George Orwell, might achieve the permanence of literature. Despite my general ban on duplicates, I keep three copies of The Elements of Style around the house so that its commonsense advice on writing will prod me everywhere I turn.

But any book weeder, no matter how lenient, inevitably wonders if he’s weeding too much. Like many readers, I’ve often confronted the basic dilemma of culling one’s shelves, which is that the book one gives away today is the very title that will be needed — or fervently desired — tomorrow. I feel a tinge of grievance each time I’m required to visit my public library and borrow reference books that, in some previous clean-out, I donated to the collection. As if plotting to spring them from jail, I sometimes wonder if I can secretly steal them back. A friend of mine still mourns for a poetry anthology she let go many years ago — a book that she can never hope to recover since she’s long forgotten its name.

The grief of it raises some obvious questions: Why weed bookshelves at all? Why not simply build more shelves to accommodate the overload — or, if necessary, move to a bigger place? What’s more, with the rise of electronic books, which can store thousands of titles within a laptop, book weeding just might become a happily forgotten art.

But literature, like any worthwhile pursuit, achieves its greatness because it forces hard choices. Concepts like Harvard’s Five-Foot Shelf and “50 Books to Read Before You Die” acknowledge that one’s reading life is limited not only by space but by time. In facing those limits, we decide, year by year, what is dispensable and what remains dear. The books that survive our collective book weeding for a few generations become classics.

It’s a cruel process involving winners and losers, as I know all too well from my own life as an author. I’ve seen copies of my first book being sold secondhand, compelling evidence that they ended up on someone else’s weeding pile. But book weeding has its pleasures, too. A librarian friend tells me that weeding a book collection can increase readership, allowing gems to emerge from the clutter. My most recent book weeding reconnected me with lots of old books I’d like to revisit, including Lewis Thomas’s The Youngest Science and Somerset Maugham’s Ashenden. Rediscovering these keepers has been like finding spare money in last year’s jacket.

The extra shelf space gained from a morning’s worth of weeding is a nice dividend, too. Maybe I won’t feel too guilty — at least for a little while — as the shelves slowly refill.

Danny Heitman, a columnist for The Baton Rouge Advocate, is the author of A Summer of Birds: John James Audubon at Oakley House.