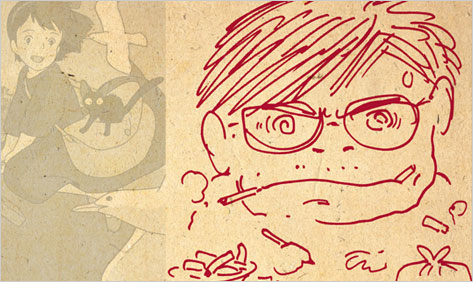 Reading Starting Point:  1979-1996, the new collection of essays by and interviews with famed anime creator Hayao Miyazaki, I could not help but recall my experience, decades ago, of encountering similar volumes by Federico Fellini and François Truffaut.  Like these two seminal masters of European cinema, Miyazaki reveals himself to be a deep thinker on many matters, cinematic, literary, ethical and sociological.  He exhibits both intellectual, critical rigorousness and intuitive, emotional fonts of inspiration.  Possessed of a unique vision on display in all of his productions, Miyazaki is nonetheless utterly sympathetic to the works of his peers, able to analyze their films and comics in illuminating detail.

This smorgasbord of generally bite-sized ruminations functions superbly on several levels:  as a partial autobiography of the artist; as an outline history of Japanese anime and animation in general (readers can derive a lifetime course of viewing from the films cited by Miyazaki); as a how-to manual for filmmakers and perceptive viewers; as an anecdote-filled memoir of those with whom Miyazaki has collaborated; and as a self-assessment of the artist’s own ouevre.

Perhaps the old-fashioned term “humanist” is the best label to apply to the man who gifted us with such classics as Nausicaä of the Valley of the Wind, Laputa: Castle in the Sky, and Spirited Away.  Concerned with humanity’s place in the larger universe, empathizing with all types of people, whatever their flaws, a fervent environmentalist, Miyazaki continues to believe in the power of non-ideological art to improve our shared condition.  While humble and modest, he’s no plaster saint.  He acknowledges a personal dislike for fellow artist Osama Tezuka, labeling his work meretricious.  He delights in recounting the drunken revels of his youth.  Hard-won grandfatherly aphorisms abound.  “What is hope?  Perhaps it’s nothing more than facing hardships with people you think are important.”  “No matter how messy things get, we’ve no choice but to live with vigor and courage.”  In short, Miyazaki portrays himself with unsparing honesty, acknowledging the true value of his own contributions to the medium without pomposity or braggadocio.

Given the overall excellent presentation of this material by the publisher, including the footnoting of foreign names and terms, the lack of a handy index is surprising.  Such a feature would have made the many anticipated return visits to this book even more fruitful.