This year, Barnes & Noble’s Discover Great New Writers program marks its 25th Anniversary.  In celebration, we’ve asked  some of our favorite writers to take a fresh look at some of the works selected for the program in its first five years, many of which — like Jonathan Franzen’s Strong Motion, his setting of a contemporary love story amidst a geological crisis — were published before their authors became household names.  See more Rediscoveries here.

When Strong Motion was published, I was a senior in high school, reading mostly dead authors. Like most readers, my first encounter with the work of Jonathan Franzen was The Corrections, which I read right after it was published in 2001. The Corrections was such a triumph, critically and commercially, that many people forget that Franzen’s previous novel wasn’t particularly well-received. Strong Motion, which arrived four years after his Whiting Award-winning debut, The Twenty-Seventh City, got mixed reviews and didn’t sell well. The Corrections can be read as a correction to a writing career that Franzen felt had gone off track after Strong Motion. (In a 2010 interview with The Paris Review he said, “The writer’s life is a life of revisions, and I came to think that what needed revision were my own earlier books.”) Late in The Corrections, Chip Lambert has a realization: “All of the sudden he understood why nobody, including himself, had ever liked his screenplay: he’d written a thriller where he should have written farce.”

Strong Motion is a thriller, at least in structure, and The Corrections, while not full-on farce, is a comedy, and a brilliant one. (I recently reread The Corrections after reading Strong Motion and found the novel to be even better than I remembered.) The ambitious Strong Motion doesn’t cohere as well as Franzen’s later novels, but there is much to admire in this sophomore effort. It displays what are now the writer’s trademarks: his serious moral purpose; his erudition; his scathing critique of materialism and the commodification of culture; his remarkable ear for dialogue and fluency with monologues; his serio-comic tone; and his masterful characterization. In particular, it showcases his ability to invent memorable female characters.

In recent years, Franzen the bird lover has ruffled a lot of female feathers. He’s been accused (unfairly) of not taking women writers seriously. There was, for example, the kerfuffle provoked by his New Yorker piece about Edith Wharton; many deemed it sexist, largely because of its fixation on Wharton’s appearance. Based on his fiction, however, I am convinced that Franzen is a feminist. He writes smart, complex, relatable women. He inhabits those characters fully and empathetically and they ring true on the page. Denise, the youngest Lambert sibling, has always been my favorite character in The Corrections; Patty’s autobiography is my favorite part of Freedom. And Renée Seitchek, the independent woman at the heart of Strong Motion, anticipates both of those creations. 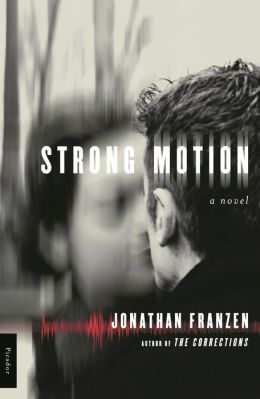 Strong Motion is a political thriller about a series of earthquakes in and around Boston, but it is also a love story. Louis Holland, a young graduate of Rice who’s moved to Somerville, Massachusetts to work for a radio station, falls for the older, wiser Renée, a Harvard seismologist. Earthquakes are a fruitful metaphor for their relationship: the sex is “a kind of banging together, a clapping and clenching of hands the size of bodies, a re-creation of strong motion” and orgasms are compared to shock waves. Renée realizes that the Boston earthquakes are the result of induced seismicity. (Given recent events in Oklahoma, Franzen’s novel has proved prescient.) Ultimately, Strong Motion concerns two kinds of faults: those related to quakes and those related to blame. That blame is probed in terms of both corporate malfeasance (the book features a corrupt chemical concern called Sweeting-Aldren) and gender battles.

The novel was published in 1992, “The Year of the Woman,” when the national conversation about gender politics had recently been invigorated by third-wave feminism. Operation Rescue and other anti-abortion groups were making headlines and pro-choice activists were busy staging defenses of abortion clinics. (I dressed in suffragette’s white and attended both Marches for Women’s Lives, organized by NOW, on the National Mall: the first in 1989, the second in April, 1992.) The struggle for reproductive rights figures prominently in the plot of Strong Motion—one could argue that a pregnancy is caused by induced seismicity of sorts, a penetration that shakes things up—and the novel’s treatment of gender seems a product of its time. Louis realizes that as a man, he is of the “default gender,” but in a moment of intimacy with Renée, he says, “You make me want to be a woman.” And later in the novel, Franzen writes:

However, Renée did not wish she were a man…A man was a creature who thought it was a sympathetic portrayal of himself to say, “I love women.”…A man took for granted a woman’s understanding of his penis but congratulated himself for understanding the clitoris and its importance. He smiled inwardly at his superiority to all the men, past and present, who had not penetrated this female secret. He felt proud of his enlightenment and goodness when he quizzed a woman about whether she had come. The perfect gift for a man who had everything was a quarter-ounce bottle of feminism.

The novelist who wrote those lines clearly respects women. Renée subverts traditional notions of what it means to be female: she is a woman of science, who is highly rational, not emotional; she is not submissive. This frustrates Louis, who wishes that she would come to him; he laments the absence of “some principle of seduction, some acknowledgement of difference” in their genders. But Renée’s lack of submissiveness seems to inspire Franzen.

Strong Motion is denser and more righteous than Franzen’s later work. In The Corrections, he loosened his grip—his moralizing goes down easier when it’s baked into comedy. But Strong Motion is still a very good book. What makes it most compelling is the intensity of the affair between Louis and Renée. The novel also beautifully explores the tension between the face we show the world and the self we hide in shame. (Shame and authenticity are recurring themes in Franzen’s work.) In Strong Motion, this leitmotif manifests itself as a series of masks: Louis turns up at his sister’s disaster-themed costume party in a safety mask, and later, in the wake of a big earthquake, he must wear one again. Louis also yearns to metaphorically unmask Renée, to “really see this woman,” beyond her facade. The imagery of the mask is eventually taken to trippy lengths in a set piece written from the perspective of a raccoon. The animal’s essential loneliness is a moving commentary on the dangers of hiding ourselves from others. Masks are protective, Strong Motion suggests, but sometimes we need to remove them in order to connect with people and experience life’s tremors. Judging by the freer pleasures—and bigger audiences—of the novels that followed, it seems that Franzen learned how to let down his guard.

Elliott Holt is the author of You Are One of Them. Her short fiction, essays, and book reviews have appeared or are forthcoming in The New York Times, Slate, Time, Virginia Quarterly Review, Guernica, the Pushcart Prize anthology, and elsewhere.

Elliott Holt is the author of You Are One of Them. Her short fiction, essays, and book reviews have appeared or are forthcoming in The New York Times, Slate, Time, Virginia Quarterly Review, Guernica, the Pushcart Prize anthology, and elsewhere.

Previous Previous Post: The Golden Age of Murder
Next Post: Freedom of Speech: Mightier Than the Sword Next