At first glance, a Richard Lange character is easily tagged. There’s the hustler, the drifter, the junkie, the grifter, and a few other variations on what Emerson termed “the crooked timber of humanity.” As one narrator in Lange’s new story collection, Sweet Nothing, admits, “I’ve seen beasts tamed and crooked made straight. But in order for that to happen, you have to be the right man, and I’ve never been anybody’s idea of right.”  Elsewhere, a moral weakling shrugs, “Being nothing special is nothing special.” A gambler protests, “The jail thing was a stumble, not a fall.” A former addict concludes, “There’s something to be said for the truth, sure, but the truth is, it’s lies that keep us going.” 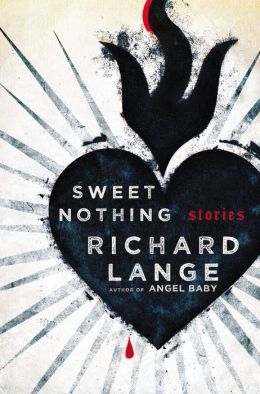 What we see, however — what Lange makes us see –is truth or the closest thing to it. The truth of flawed humans struggling in a harsh world. Take D, the aging security guard in one of the finest stories, “Apocrypha.” Living in a slum hotel in Los Angeles, the sole protector of Irving Mandelbaum’s small jewelry store, he has also learned to protect himself. The hard way. “You walk out that gate,” he recalls of prison, “but you’re never free. What your time has taught you is a chain that hobbles you for the rest of your days.” Through D’s eyes, we watch strutting young Leon and his gang scenting Mandelbaum’s store as easy prey. The stale air reeks of impending violence. Instead of a predictably heroic standoff, however, Lange offers something far shabbier and far more convincing. A ruined Leon: “His eyes are dull and dead-looking, his lips burned from the pipe. All his charm is gone, all his kiss-my-ass cockiness. Nobody is following this boy anymore but the reaper.” While D endures, still relying on ” . . . a couple bucks put away, and one eye watching for the next wave.”

With a couple of exceptions — “The Wolf of Bordeaux,” set in 1899, and “After All,” depicting an apocalyptic wasteland — Lange returns here to California and the southern borderland so vividly evoked in his novels Angel Baby and The Wicked World and in the story collection Dead Boys. This collection is uneven — “Instinctive Drowning Response,” for example, is a maudlin elegy — but in the best stories, the syncopated rhythm of Lange’s dialogue and the laconic grace of his descriptions can still capture a life in a single episode. And his most memorable characters are, as always, the least remarkable. Blanca, mother, grandmother, and hospital canteen worker, who sees a toddler killed by a stray bullet in “Baby Killer.” Henry Brewer, seventy and staring down an encroaching wildfire, who ends up helping a Mexican father and son searching for relatives attempting to cross in “To Ashes.” Danny, the boozy husband and father whose infidelity spawns a neat blackmail scam in “Gather Darkness.” Each retains some vestige of dignity, however tattered, simply by enduring daily disillusionment at best, violence at worst. “The sooner you learn it, the better,” Blanca declares, recalling a horror in her youth, “some loads you carry on your own.”