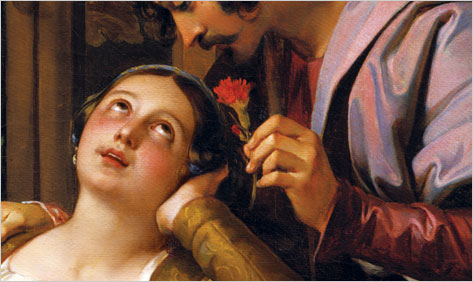 As the author of twenty-two romances, I ought to be an expert on the characteristics of great seducers. But in reality I’m reluctant to apply the word to my heroes. There’s an air of misogyny around it, a sense of heartlessness and (even worse) an indiscriminate preference for many lovers as opposed to one. Even Shakespeare eschewed the label; the only character he terms a seducer is the unpleasant and unrepentant Bertrand in All’s Well that Ends Well. (Which, by the end, doesn’t end well because anyone can see that Bertrand’s philandering is not going to be bottled up by a wedding ring.)

Betsy Prioleau’s Swoon is an amusing and informative history of Lotharios that fully acknowledges the reprehensible side of her subject — while emphasizing that distaste doesn’t mean such men don’t exist. No matter how we romanticize love, the truth is that over human history a few men have been able to take their pick from among the women they encounter. Prioleau brings in DNA studies, sociologists, and the like, but all of it boils down to a conundrum: what do these men have that the rest of their testosterone-laden brethren do not?

Her task is a complicated one. How does a researcher identify seducers, in the flesh, in history, in books? When Prioleau finds a man named Jack, given to crushing his empty beer cans for emphasis, I’m pretty sure that back in my dating days he would have had absolutely no chance of enlisting me to help spread his DNA. Does that mean that seducers stick to their class, to their race, to their historical period?

The answer is no. A true seducer cuts a wide swath, befuddling women so they don’t notice the beer cans around his feet or the 400 female contacts in his iPhone. Physical beauty is definitely not required; Prioleau interviews one blessed with “the face of an overfed hamster.”

Swoon wanders far and wide, investigating the seductive ploys of men who don’t rely on mere physical beauty to attract women. Johnny Depp, for example, “ornaments himself for maximum erotic impact” by “playing to the nostalgia for male plumage.” The text leaps effortlessly from philosophers to academics to real people, putting Sumerian fertility gods in conversation with Casanova. Prioleau even examines my genre, pointing out that mass-market romance heroes are “talkative girlfriends embodied in 210 pounds of Mr. America muscle mass.” If I’m honest about it, she’s not far off in that analysis. My own father, the poet Robert Bly, makes an appearance, holding forth on male lovers’ “wild warrior energy.”

My dad wrote Iron John as a guide for men who needed to recover the wilderness within (yes, my childhood was punctuated by the beating of drums). Swoon will probably be read mostly by women, who will find themselves laughing aloud at the ploys of hamster-faced Lotharios. Too bad. It really should be read by men. Swoon would be an excellent guide for a man who wants to be desirable to women. It would even help with my father’s larger project, which could be summed up as initiating men into a world of male leadership.

Because — following Prioleau’s lead with a quote from Bette Midler — “If you know what women want, you can rule.”

Eloisa James is a New York Times–bestselling author of historical romances, as well as a memoirist (Paris in Love) and professor of English literature teaching Shakespeare at Fordham University. Her latest novel is Three Weeks with Lady X.