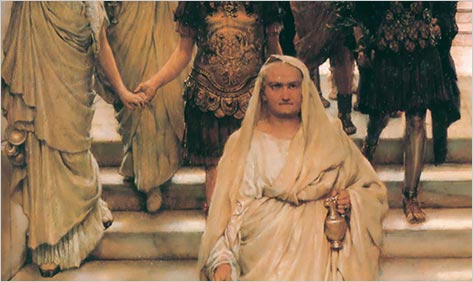 After 100 years, the Loeb Classical Library is not just a repository of history — it is itself a historical document, through which you can trace the evolution of modern understandings of the ancient world. Take, for instance, the introduction to the 1931 Loeb edition of the Annals of Tacitus. The translator, John Jackson, grants that “the greatness” of the Roman historian’s intellect and literary style can still “be felt after the lapse of eighteen centuries.” But “how long they will continue to be felt, one must at whiles wonder,” he goes on to write. On the whole, Jackson finds Tacitus’ picture of corruption and political violence in imperial Rome too uniformly dark to be credible. He speaks of the historian’s “wild exaggerations” and “poisoned” rhetoric, and complains that he lacked “a charity that thinks no evil.” At best, Jackson hoped that “as long as Europe retains the consciousness of her origins,” Tacitus would continue to find “some” readers.

The historical irony could not be thicker; for within the decade, modern Europe would become an uncannily perfect reflection of Tacitus’ Rome. With the rise of totalitarianism in Germany, Italy, and Russia, Tacitus’ descriptions of Rome under the early Caesars would no longer seem like “wild exaggerations” but daily news reports. Secret police, anonymous denunciations, constant shifts of the government “line,” whole societies cowering before the whims of rulers: Tacitus described it all, two millennia earlier. The critic Lionel Trilling, writing about Tacitus in his 1950 book The Liberal Imagination, titled his essay “Tacitus Now”: “our political education of the last decades has given us to understand the historian of imperial Rome,” Trilling declared, with his litany of “dictatorship and repression, spies and political informers, blood purges and treacherous dissension.”

Indeed, Tacitus begins the Annals by complaining that the true history of Rome under the “bad emperors” — Tiberius, Caligula, Claudius, and Nero, who reigned from A.D. 14 to 69 — had never been written because of the “sycophancy” and “cowardice” those rulers inspired in their subjects. Publius Cornelius Tacitus, who was probably born around 55, had himself completed an illustrious career in politics by the time he wrote the Annals, which appeared in 116. Enough time had passed for him to be able to write the undisguised history of the early Caesars — in his famous phrase, “sine ira et studio,” “without anger and without partiality.”

Yet there is no mistaking the moral passion that animates Tacitus’ bitter, unsparing history. Above all, what disgusts him in the Rome of early empire is the willingness of its leading citizens to cloak the new imperial rule in venerable republican garments. For centuries, Rome’s elite had prided itself on its rugged independence, stern military discipline, and aristocratic pride. Under Tiberius Caesar, the adopted heir of the first emperor, Augustus, the Senate continued to meet, and the old laws were still on the books. But it was an open secret that real power was in the hands of the arrogant, sexually depraved Tiberius. One of the most famous lines in the Annals comes in Book III, when Tacitus writes that Tiberius, on leaving the Senate, “had a habit of ejaculating in Greek, ‘These men — how ready they are for slavery!’ Even he, it was manifest, objecting though he did to public liberty, was growing weary of such groveling patience in his slaves.”

The Annals abound in moments of grim sycophantic comedy. Right at the beginning of Book I, Tacitus describes Tiberius’ seizure of power after the death of Augustus. Like his ancestor Julius Caesar, who famously refused a crown while grasping absolute power, Tiberius was determined not to tyrannize openly. When he appeared before the Senate, then, he declared that he couldn’t possibly take over Augustus’ role, since he was not up to the job of emperor. The Senate, Tacitus remarks in one of his characteristic strokes of compressed irony, knew better than to believe these denials: their “one dread was that they might seem to comprehend him.”

But then one senator, Asinius Gallus, made a tactical error. Taking Tiberius at his word, Gallus asked him, if he felt “unequal…to the whole weight of government,” which department he would want to undertake. “This unforeseen inquiry,” Tacitus writes, “threw [Tiberius] off his balance,” and Gallus, who realized he had made a mistake, tried to cover himself by saying that “the question had been put to him, not with the hope that he would divide the inseparable, but to gain from his own lips an admission that the body politic was a single organism needing to be governed by a single intelligence.” The whole scene sounds like nothing so much as one of those Stalinist party congresses where the delegates applauded for hours, terrified to be the first to stop.

At every turn in the Annals, Tacitus hammers home the failure of the Romans to live up to their ancestral ideals. That is why it is fascinating to read his book alongside a relatively new addition to the Loeb Classical Library, the Memorable Doings and Sayings of Valerius Maximus. The two volumes of this work didn’t make it into the series until 2000, a sign of its relative unimportance in the canon of Latin literature — indeed, until D. R. Shackleton Bailey’s Loeb translation, there had never been a complete modern English edition. This is because Valerius Maximus is essentially an anthologist, a compiler of stories from Roman history that are mostly known from other sources.

He arranges these stories into books and sections, each designed to illustrate a fundamental Roman virtue. The first chapter of Book I, “De Religione,” gives examples of Roman strictness in religious observance: for instance, a priest named Sulpicius had to give up his office because the mitre slipped from his head while he was performing a sacrifice. Book II.7 is headed “De Discipline Militari”: military discipline, Valerius writes, is “the chief glory and mainstay of Roman empire, preserved intact and safe up to the present time with salutary steadfastness.” Thus we read of the Dictator Postumius, whose son “went forth from his post and routed the enemy of his own motion.” Even though this was a victory, it was against orders, so Postumius had his son beheaded. “You judged it better that a father should lose a brave son,” Valerius intones, “than that the fatherland should lose military discipline.”

In these pages, we hear the voice of official Roman ideology, in its purest form. Valerius Maximus shows what Rome wanted to believe it was — much as, for instance, William Bennett’s Book of Virtues is a document of what America wants to believe it is. But what makes Memorable Doings and Sayings ring especially hollow is the date of its composition. It was compiled in A.D. 14-37 — that is, during the reign of Tiberius Caesar. And the book is festooned with the most shameless flattery of the emperor and his ancestors. It opens with an invocation to Tiberius, “surest salvation of the fatherland, in whose charge the unanimous will of gods and men has placed the governance of land and sea, by whose celestial providence the virtues of which I shall tell are most kindly fostered and the vices most sternly punished.”

If Tacitus’ Annals had not survived (as it is, we have only parts of the whole work) we might not know that Tiberius’ reign was in fact a time when all the virtues Valerius praises were decaying — from piety to military discipline (the Annals opens with a description of a mutiny) to “abstinence and continence.” Thanks to Tacitus, we can hear in Valerius Maximus the voice of one of those “sycophants” who falsified the history of their day. Read together in the Loeb Classical Library, they offer a living demonstration of every historian’s fundamental choice: whether to tell people what they want to hear or what they need to know.