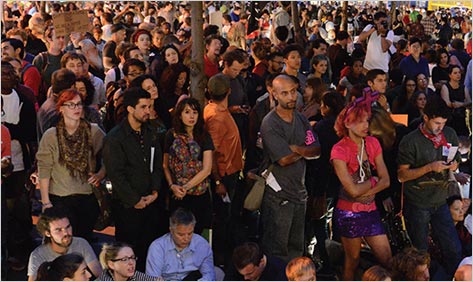 What was Occupy Wall Street? For the vast majority of Americans, it was little more than a news story, a colorful affair of a few hundred protestors colonizing a small open space in downtown New York City. For a sizable number of people, however, Occupy Wall Street was much more than that. After years of apathy and discouragement, it represented what looked to be a new birth of the American Left, a real popular movement that drew wide, if shallow, support to the cause of economic and political reform. And to a small hard core — the people who were actually there in Zuccotti Park, day in and day out, from September to November 2011 — it was nothing less than an epiphany. Here was the society of the future, the New Jerusalem, taking shape right before their eyes: a society built on cooperation and consensus, without official leaders, dedicated to mutual aid and social justice.

Nathan Schneider, author of Thank You, Anarchy: Notes from the Occupy Apocalypse (California), belongs to that third, inspired group. Schneider approached Occupy, he writes, as a participant observer, writing journalism about the movement even as he took part in it and rooted for its success. As a faithful Catholic, he takes the word “apocalypse” in his subtitle quite literally. Occupy was not a catastrophic end of the world, though that implication is certainly present, but a “lifting of the veil” so that the truth can shine out. “After that,” he writes, “one can’t go back unchanged. The preceding world has passed, and a new revelation is at hand.”

Thank You, Anarchy is not a definitive history of the Occupy movement. For one thing, Schneider writes mostly in the first person about events he saw, and while he was present for many of the high points — not just in Zuccotti Park but at planning meetings and rallies before and after — no one person could have witnessed everything. But even if Schneider had conducted more interviews and done more research, it’s unlikely that he could have told the whole story, since Occupy was by definition a centerless movement.

Take, for instance, the decision to actually start occupying the small, corporate-owned plaza known as Zuccotti Park, on September 17, 2011. As Schneider shows, the date and the idea were popularized by the magazine Adbusters, which began tweeting the hashtag “OccupyWallStreet” earlier that summer. (September 17th was chosen because it was the birthday of the editor’s mother.) But Adbusters was only crystallizing the work of several independent radical groups, many of them inspired by the Arab Spring of 2011, that had each been planning their own demonstrations. Responsibility for the occupation itself fell to a self-selected group of activists who called themselves the New York City General Assembly and who began to meet near the famous “Charging Bull” statue on Wall Street.

But it would be a mistake, Schneider makes clear, to see Occupy Wall Street as the result of a detailed campaign. “Nobody who worked to make Occupy Wall Street happen imagined anything much like what actually did: it altered them and transformed them and messed with them,” he writes. Not until hundreds of people actually showed up at Zuccotti Park did it become clear what kind of logistical problems this encampment would involve: “They were making signs, eating donated pizza, collecting trash, laying down sleeping bags and cardboard to sleep on, and running a media center on a few uncomfortable tables with a generator and a wifi hotspot.”

It was clear even at the time that this absence of central leadership was both the thing that made Occupy unique and exciting and the source of many of its problems. All decisions at Zuccotti Park were made, Schneider shows, by the General Assembly, which insisted on consensus and allowed every participant to speak. This meant that meetings would go on for hours, with participants often preoccupied with questions of  procedure and etiquette, making firm decisions hard to come by. Volunteers ended up running Occupy’s media and Web presence, not because they were elected but because they simply stepped up to the task. The movement received hundreds of thousands of dollars in donations, but as Schneider makes clear, it never used the money, because no one could decide how to manage or spend it.

Ideologically, too, Occupy never quite came into focus. That the movement had something to do with anti-capitalism was clear from its name and location. Its most enduring accomplishment was to add the ideas of “the 1 percent and the 99 percent” to American political discourse. But Occupy was notoriously unable to unite its members around a single clear agenda or political demand: a piece of legislation, say, or a new set of rules to crack down on financial excess. “This is not about the demands,” Schneider quotes one Occupier as saying. “The demands will come. It’s about the beautiful thing we’re doing here.”

The beauty of that “thing,” however you define it, is the real subject of Thank You, Anarchy. Schneider writes lyrically about the communitarian joy of being at Zuccotti Park, which for him was clearly a spiritual experience as much as a political one. “In the rupture of the ordinary that characterized those early days,” he recalls, “everything felt in some sense religious, charged with a secret extremity and transcendence.” And the chief message of his book is that the true significance of Occupy lay not in its tangible effects on the outside world but in the process of Occupying itself. “The occupation was an eddy of grace amid the Fall,” Schneider writes, and grace is not instrumental but its own reward. Like Henry V at Agincourt, Schneider can only pity those who weren’t there to experience it.

Another way of describing “a rupture of the ordinary,” however, is a holiday; and Schneider’s book suggests that the best way to understand Occupy is as a long, earnest holiday from reality, including the reality of politics. The Occupiers at Zuccotti Park were so concerned with their own experience in the moment that they had no time for, or interest in, the kind of long-term organizing and planning that can actually change the world. At the very same time that the Tea Party, which shared some of Occupy’s grievances, was establishing its stranglehold on American government, Occupy came and went — leaving its participants with wonderful memories, as a holiday is supposed to.