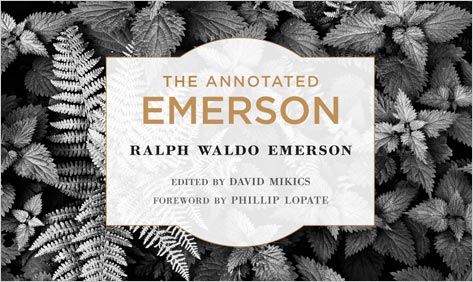 Yes, yes — Ralph Waldo Emerson was a brilliant and seminal American thinker, and his writing is studded with fabulous sentences, gemlike insights, and a remarkable record of mutual dialogue between self and world. But let’s be honest: for the uninitiated, it’s a dialogue that can prove frustratingly difficult to enter. It’s not that Emerson is opaque, exactly, but that he’s faceted. He’s digressive, sidewinding. (“Man is analogist,” he claims, and then proceeds to demonstrate his humanity by analogizing for pages.)

One could go so far as to say that Emerson is just plain dense. Even though some of his phrases leap off the page and lodge in the mind, the jewels in his prose can be hard to string together. It’s not just that, in his role as the mid-nineteenth century’s foremost American public intellectual, the man was ambitious. It’s more that his writing is all-encompassing, enfolding the self and its contradiction, looking for the reflection of the reflection, proposing the corollary and also its opposite. Emerson elevates the humble, finds lofty sentiment in compost, celebrates labor, all in the service of furthering thought, which, he hopes, will lead us full circle back to action, to vision, and then to reflection once more.

Sometimes, despite himself, his meditations are unintentionally comic, as in the essay “Nature,” where he writes, “The greatest delight which the fields and woods minister is the suggestion of an occult relation between man and the vegetable. I am not alone and unacknowledged. They nod to me and I to them.” Moments like this are likely to cause the reader to do a double-take — is Emerson discussing a secret alliance with affirming turnips? Emerson’s point, of course, is far from arcane: he’s hoping to express the world’s mutuality, its correspondence, its fragmented wholeness. For him, illumination points to illumination points to illumination — and each flare is a reflection of some unseen but present centrality. Life becomes a quest to see amid facets, to “magnify the small, micrify the great,” and to record reciprocities between inner and outer worlds. These are all tall orders, to be sure, but Emerson binds small and large, inner and outer, with remarkable grace. He’s agile as well as original. He has the genius not merely to recite the commonplace that thought should lead to action, but to affirm that action should lead back to thought.

Still, if there are rewards aplenty in Emerson, there is still the problem of the slow going, the circumlocution. The revelation resists sound bite. Emerson rewards us, but he only rewards our full attention. And, as we know, full attention can be hard to come by.

What a pleasure, then, to have, in The Annotated Emerson, a lovely and helpful version of many of Emerson’s bests, gathered and annotated by David Mikics and introduced by Phillip Lopate. This is in no way Emerson lite. These are not shortcuts but rather a welcome frame for Emerson’s particular kind of difficulty. The book’s introductions curate the voluminous career, and the wide margins of the pages, dappled with thoughtful notes, give the meditations space to unfurl. This is a book that gives us each hope to approach the “new yet unapproachable” Emerson.

Any lay reader will find an open door here. Those who already love Emerson and know him well may find a few cherished things missing, but they may also find a few things they didn’t know they wanted to find. Both introductions by Lopate and Mikics refer already devoted Emerson fans back to the looser, more exploratory journals, but they also do us the service of quoting liberally from the journals in this book itself, right in the margins of the essays. Indeed, one of the pleasures of this book is to see, as Mikics puts it, how much “traffic” there is between the journals and the final essays. We see the sentence in draft, the illumination plucked out of the scribble. There’s also a chance to see that we’re not alone in sometimes tossing our hands up at the famed American Scholar. In “Nature,” Emerson  — not merely content to converse with carrots — refers to himself as ” a transparent eyeball.” This was too much for Emerson’s colleague Christopher Cranch, who took the occasion to sketch an enormous open eye walking on stilty pant-legs through the fields.

“Emerson is our Shakespeare,” Mikics claims, and while some may argue for Whitman, or for Thoreau, or for Dickinson, or for all four, there’s no question that Emerson is a founding father of our national literature, a bedrock of our oratory, an early capturer of our spirit. He does rise in our minds as one of the greatest American intellectuals, one of the early few to grasp and form and articulate the grain of our thought. Not, of course, that he was a narrow patriot — rather he was a quarreler, a re-maker, a rabble-rouser: “Please don’t read American,” he wrote, “thought is of no country.”