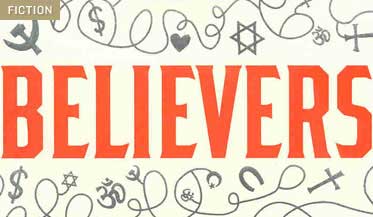 Zoë Heller’s much-lauded 2004 novel What Was She Thinking? Notes on a Scandal was a tour-de-force depiction of a family’s unraveling. Heller’s triumph in that book was to delve so deeply into the heads of the two main characters — one of whom had been involved in an affair with her teenage student — that it was impossible to feel entirely unsympathetic about their egregiously selfish actions. Her new novel, The Believers, is a similarly careful portrait of a family in trouble. But this time, Heller has multiplied her perspective to focus on a cast of characters, shifted the drama to America, and invoked a whole new set of questions about the way families go awry.

The novel opens in London in 1962, where a mousy young woman, Audrey, is swept off her feet by a visiting American lawyer, Joel Litvinoff, at an otherwise dull party. Joel insists on accompanying Audrey to visit her parents the next day, squeezing in a date before he must return to the States. Having accelerated the get-to-know-you phase of their relationship, Joel wastes no more time and proposes that Audrey marry him. She accepts, and the two begin a life together in New York. The novel skips ahead 40 years and resumes in 2002, in Greenwich Village, where Audrey and Joel inhabit a ramshackle townhouse, with a revolving door for their friends and family. Now a hotshot civil rights lawyer, Joel is preparing to defend an Arab American who has visited an al-Qaeda camp in Afghanistan and is accused of terrorism. Joel suffers a stroke the morning of the trial and abruptly bows out of the novel. As he lies in the hospital, his daughters and son assemble, bringing with them the full array of family hang-ups and hardships.

Karla, his perpetually overweight elder daughter, works as a hospital social worker but is unable to have a frank conversation with either her husband or mother. Karla’s husband, Mike, is a bully: upon their discovery of Karla’s inability to conceive, he decides that they will adopt a child, ignoring his wife’s obvious reservations about becoming a mother.

Rosa, the younger daughter, has recently returned from an extended period of travel in Cuba, where her revolutionary activities blended with love affairs, neither leaving her with much to show for her time abroad. She has taken a job at an afterschool program for teenage girls in Harlem but seems to hold more contempt than care for her charges. The only thing that brightens her predominantly lackluster life is her newfound interest in Orthodox Judaism.

Lennie, the Litvinoffs’ adopted son, is perhaps the most troubled and directionless of all the children. Although in his 30s, he is unable to complete even a paint job for his mother’s friend. He dabbles in drugs, then dangerously experiments, and seems to have no sense of his own possibility. Audrey indulges and even ignores his failures, allowing him to perpetuate his self-abuse. While she doles out $20 bills to her son, she is equally generous in distributing scorn and derision to her daughters, making fun of Rosa’s religion and openly criticizing Karla for her weight.

The sudden stress of Joel’s stroke heightens these tensions, which are brought to a fever pitch by the emergence of Berenice Mason, Joel’s longtime mistress, with whom he has fathered a child, now five years old. If there was one belief to which Audrey, the most cynical and disillusioned of all the characters, adhered, it was the goodness of Joel — the man to whom she was devoted for 40 years. The appearance of Berenice shakes the ground beneath her feet, shattering the only faith she has had.

Despite all this discontent, The Believers is compulsively readable. One turns the pages not so much to learn what happens next, but to learn how the characters cope with their missteps, how they navigate the web of obligations, duties, and resentments in which they are caught. The frequent reversals in point of view prevent Heller from developing exceedingly intimate portrayals of her characters of the type that made Notes on a Scandal so extraordinary, but her alternation constructs a rounded, general vision of distress.

The recurring shift in perspective also augments the sense that Heller is juggling several different contemporary tropes. The Believers reminded me of Claire Messud’s The Emperor’s Children, which dealt with privileged, overeducated, and underemployed young New Yorkers coming to terms with the post-9/11 world; at other times it recalled Allegra Goodman’s Kaaterskill Falls, a book about Orthodox Jewish life in upstate New York (Rosa makes several pilgrimages to this region) and the push and pull of religious and secular forces. But if Heller has not confined herself to one portrait of misery — and instead argues for the pervasiveness of the malady — why should she constrain herself to one approach to her theme?

Paradoxically, this somber novel maintains a lively clip, losing its entertaining hold on us only occasionally, when the multiple viewpoints work to obscure the motives of individual characters. Few contemporary writers have Heller’s ability to weave moments of lyricism into the everyday lives of her characters, and these moments keep her focus sharp. If the characters in The Believers all suffer some sort of crisis of faith, the novel itself leaves no doubt as to Heller’s talents.

Previous Previous Post: Cheever: A Life
Next Post: The Life You Can Save: Acting Now to End World Poverty Next